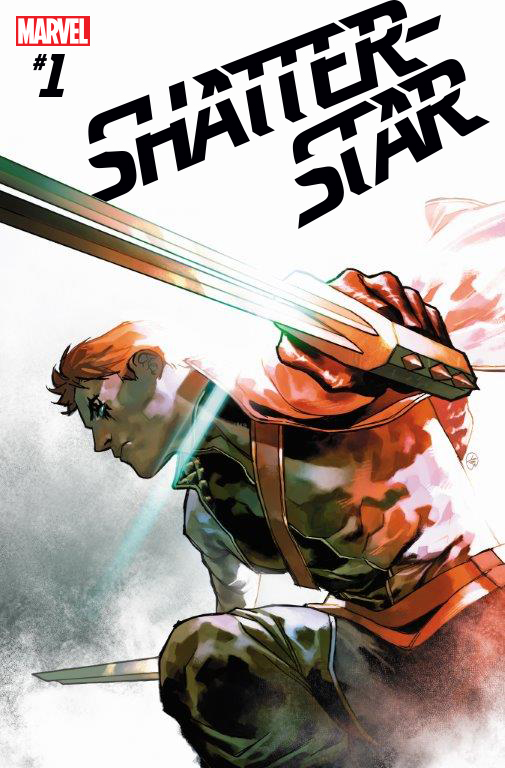 The character Shatterstar began existence as what we would now regard as a caricature of the American paramilitary superhero style convention of the 1990s. A tattooed face, long braided hair, swords, and grimaced teeth were part of a de rigeur package for superheroes of the time. Shatterstar was in appropriate company: other characters created for American publishers Marvel Comics and Image Comics during this time included the gun-wielding cyborgs Cable, Ballistic, and Stryker, and the blade-fingered, pony-tailed Ripclaw and Warblade. Shatterstar’s frenzied use of swords groups the character with Image Comics’ sword-wielding warrior, Zealot. All of these characters fit a genre style of stylised violence one level more bloody than the fisticuffs of caped and masked superheroes of earlier times. By way of illustration as to how poorly the character was regarded, Shatterstar was a throw-away joke character in the recent motion picture Deadpool 2, a parachute descent leading to a comic death by helicopter rotor when his hair gets in his face.

So many cliches to scrub away, but writer Tim Seeley does a respectable job of this in Shatterstar #1. The title character leads a quiet life as a landlord of a building in Queens, rented out to various interdimensional refugees. Here Mr Seeley has some fun. Shatterstar is one of the enormous cast of the mutant superhero group called the X-Men, a significant part of Marvel Comics’ panoply of characters. The X-Men’s many comics are notorious for alternative timeline stories. And so within Shatterstar’s boarding house we see:

1. an aged hero with Parkinson’s Disease from an alternative past;
2. a cyborg assassin from an alternative future who finds her target in this reality is a very shy teen girl;
3. two “former rajas of the Scorpius Citadel” who are working on a fantasy screenplay;
4. a reformed super villain / talking dog from an alternate reality;
and
5. perhaps most amusingly, a slightly mumsy regional bank manager from the earth of the readership who accidentally crossed dimensions and decided to stay to experience the craziness of life with superheroes.

The thread of comedy is a repeated surprise. Shatterstar humiliates the villainous dog, called Pug-Smasher, after failing to negotiate a better location for disposal of bodily waste. This is done with unexpectedly wry humour – “Did you just utterly emasculate me in front of Mitzi Moscowitz, the most eligible schnauzer in Queens?” And Shatterstar likes being a “landlord” because it sounds regal, he thinks, as he scoops up the poop

Shatterstar himself is depicted by Mr Seeley as having considerable emotional intelligence. Shatterstar sees an ex-boyfriend and recognised the truth of the assessment of their breakup: they did not fight enough. And Shatterstar visits the theatre. Shatterstar is from an interdimensional realm called Mojoworld, where life and death is perversely orchestrated for television ratings. Within the theatre, however, Shatterstar finds a sense of perspective from which to perceive his former life as a gladiator who killed to entertain a crowd: “This extreme contrast… was all the evidence anyone needed to know that real life was not entertainment.”

Because this is a superhero comic, in the backdrop a gang of interdimensional villains called The Death Sponsors attack and violently capture Shatterstar’s lessees. The group are lead by Shatterstar’s former lover and coach, a murderous poppet called Gringrave. The story ends with Shatterstar vowing vengeance…. but solemnly, over the grave of one of his dead tenants. There is no shouting, and not a gritted tooth to be seen.

Mr Seeley does an admirable job of characterisation and writes an interesting, humour-filled story. This is a surprisingly respectable reconfiguration of a long disrespected character.