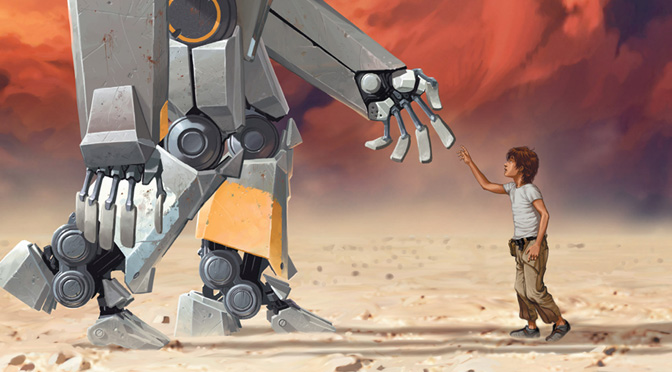 The comic is set in the year 2215, on a human-colonized planet called Caldoria that has been ravaged by a war between humans and machines controlled by a rogue artificial intelligence. The story’s premise is nothing new: the theme of post-apocalyptic science fiction stories – particularly tales that focus on rebellious machines – is a well-trodden path. Fortunately, “Rock & Stone”’s appeal relies not on novelty, but upon execution.

“Rock & Stone”’s protagonist is a young boy named Stan Gelbstein, who lives alone in a barren wasteland and subsists on solar and wind power, a greenhouse, and a stock of canned goods. The story starts with Stan’s shelter being destroyed by the arrival of a giant robotic centipede and a bipedal robot with the serial number RCK1. This bipedal robot is unique because it is apparently not controlled by the HAIVE, which is the rogue AI that rebelled against humans. This name is obviously a play on the word “hive,” but also stands for “Heuristic Artificial Intelligence that became Viral and Evolving” as pointed out by RCK1.

With his shelter destroyed and no longer capable of sustaining him indefinitely, Stan forces (or, more accurately, guilts) RCK1 into taking him along on its mission. Along the way, the story reveals why RCK1 is not under HAIVE control. The journey is not without incident: the two become separated, with Stan finding himself amongst other human survivors.

The comic takes great pains to introduce and flesh out the characters of the other survivors and show them as receptive of a new member. But it does not take long before Stan’s presence and participation causes friction and ultimately problems. A botched supply run leads HAIVE machines back to their base, ending up with at least one survivor dead and the rest captured. Stan is the only one to escape, with the help of an invisibility cloak and the timely return of RCK1.

The first issue then ends with the true identity of RCK1 being revealed, along with his mission. The duo decide to go together in an effort to put a stop to HAIVE once and for all.

“Rock and Stone” #1 starts slow and may test impatient readers. There is not a lot of excitement to be had when the setting is a barren wasteland inhabited by what was initially believed to be a single, lonely and presumably last human. But as soon as the comic gets traction, it becomes an engrossing tale that provides refreshing, ample focus upon the human survivors. They are not depicted as saints, but neither are they portrayed as demonized or tortured by their experiences into insanity (some post-apocalyptic stories are prone to this in an effort to introduce drama.)

While the survivors do leave the story after a few pages, there is a obviously a very good chance that they will be revisited later on given they have been captured, and not killed by the machines.

The interactions between Stan and RCK1 are also well thought out, and their relation much deeper than a kid and a protector as revealed in one of the first issue’s major twists. This first issue does a great job at world- and character-building. Post-apocalyptic stories with rogue artificial intelligence may indeed be a dime a dozen, but are still worth reading when done properly as “Rock & Stone” manifestly proves.