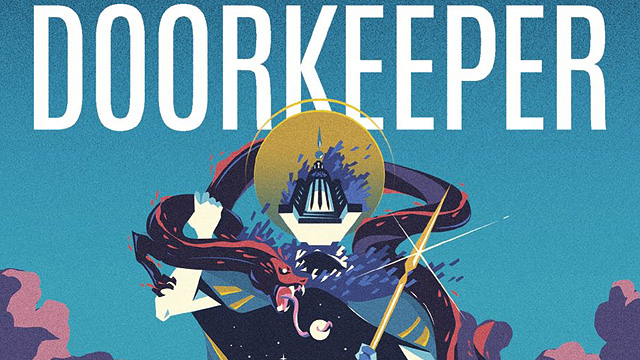 This is an interesting fantasy comic written by Ethan Chua and Scott Lee Chua, both from the Philippines.

Any reader who is familiar with Neil Gaiman’s influential and groundbreaking Sandman comic book series (1989-1993) will look at the Doorkeeper and see similarities between the title character and Mr Gaiman’s Dream of the Endless. The pages that feature the Doorkeeper character can easily be mistaken for pages from a Sandman comic. The indicia of the black dialogue boxes, the anachronistic and overly formal verbiage, the strict adherence to nondescript ancient rules and traditions, and the ability to open doors literal and figurative could easily describe both the Doorkeeper and Dream. The only telling visual difference is that the Doorkeeper has a literal door for a head. The immediate challenge for the writers is to avoid the perception of slavish imitation.

However, to focus on these details, and thereby dismiss the entire anthology as a rip-off, is a disservice both to the authors and their work. Despite serving as the titular character and the lynchpin of the stories, the Doorkeeper himself serves only a small role in the comic. The character only ties the stories together and helps nudge the plot along, the value of the comic is found in the stories that he helps tell. This is a comic that is meant to be properly judged based on the sum of its parts.

The Doorkeeper anthology contains six chapters (and an epilogue) of standalone stories of people who are about to make seemingly small, personal decisions that have far-reaching consequences. In each of these stories, the Doorkeeper appears and helps guide the individuals into making a choice.

There is a lot going on under the surface of these stories, to the point where the presence of an omnipotent, time-stopping cosmic entity with a door for a head gets overshadowed by the plots of each individual story.

Much of this depth will be lost on foreign readers who are not familiar with the Philippines’ history and rich culture. By way of example, the most interesting chapter involves a retired female musician who is in the brink of deciding between migrating to California or staying in the country for a reunion performance with her former bandmates. Foreigners are likely to miss out on all the cues that place the story at the time when then-president Ferdinand E. Marcos placed the Philippines under martial law: her performance could help fan the flames of rebellion at the cost of turning her into a desaparecido.

Another story involves a take on the Filipino epic Florante at Laura, told from the perspective of the story’s villain. This chapter offers a fictionalized take on the story, and one that strays very close to justifying the villain’s place in the narrative.

As noted above, despite being bound by rules and traditions, the Doorkeeper is near-omnipotent and has the power to transcend time and space. The stories in this anthology are set in different time periods (and some, as the Florante and Laura story shows, might even be set in a different reality). These backdrops help differentiate each chapter. There is a very noticeable formula to the stories that could have made some of the stories redundant, where it not for the added texture provided by the different settings.

It is very obvious that the ideal demographic for Doorkeeper are Filipinos, as the stories rely on basic familiarity with the Philippines’ culture and rich history for texture. But it will still provide a worthwhile read to foreigners, particularly ones who are interested in a slice of the Philippines’ culture and those willing to look past (or excuse, or enjoy) the similarities to Sandman. Doorkeeper should be appreciated for what it is – a very decent collection of short stories about people on the brink of making a choice, and the mysterious entity who makes sure these choices are not made blindly.