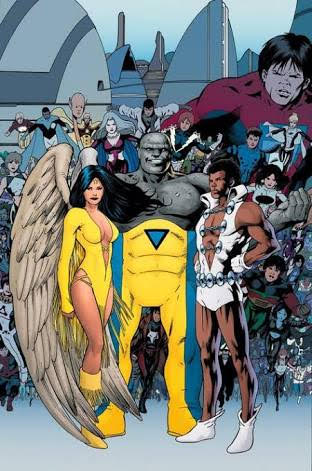 The original premise of the Legion of Superheroes was cleverly straightforward and firmly embedded in the male teen psyche. Imagine the scenario of a boy with a big secret. That secret was that the boy was actually very special, but was forced to pretend to be ordinary. The boy can tell none of his school friends about his awe-inspiring secret. And there was no one else in the world who was like the boy, and so he was lonely, entirely without peers.

The loneliness in carrying that secret, and of having no one like him, was deliberately akin to the loneliness of most quiet teenaged boys who read superhero comics in the 1950s, who each wished he had powers and abilities far beyond those of normal boy: who each wished they were a Superboy.

That power fantasy was extended by having other, awesome friends, not at school, each one also special, and therefore better than the other, dull kids who lived in the boy’s small rural community. But these friends lived more than just in a cooler place out of town: they lived a thousand years into the future. And so the boy could share his secrets with them.

Thus Superboy, the 1950s teenaged version of DC Comics’ major comic book character Superman, came to have super-powered friends residing in a science fiction utopia. They had names like Lightning Lad, Saturn Girl, Cosmic Boy, Ferro Lad, Dream Girl, Colossal Boy, and Ultra Boy. And there were not just a few friends. There was a Legion of them.

1958 was the year Otto Binder created the Legion of Superheroes. The concept was little more than a few teenagers who lived in the thirtieth century with an upside-down yellow rocket as a clubhouse, intended as a one-off story in Superboy. Mr Binder underestimated the character’s popularity, and the characters eventually ended up with their own title. Some of these stories became acknowledged as epic tales in the American superhero genre:

As time progressed, the Legion of Superheroes’ ranks grew. The names of the characters become a little more sophisticated as time progressed: Wildfire, Timber Wolf, Dawnstar, Tellis, and Quislet. The cast became huge. There were romances and marriages, strong friendships and a rainbow array of personalities.

Mr Binder might be the man who created the Legion, but the title is most associated with Jim Shooter. In 1966, Mr Shooter, then a fourteen year old boy, made a pitch to DC Comics, which consisted of four stories. The four stories were published in Adventure Comics, and the following year Mr Shooter, aged fifteen, became a full-time writer for the Legion. Mr Shooter went on to become the Editor in Chief of Marvel Comics from 1978 to 1987. Mr Shooter returned to script the Legion of Superheroes in 2008, but a falling out with management cut short his return to the title, and it was cancelled.

Because the title is set in a mutable future, the characters are targets for bruising change. DC Comics undergoes periodic updates to its mainstream superhero shared continuity, the consequence of which is that the Legion of Superheroes almost always suffers. The history of the team was episodically unpicked – in 1994, 2004, and 2009. Various characters were aged, de-aged, killed off, brought back to life. The goodwill of the Legion of Superheroes brand has been systemically tarnished by editorial lack of direction over a period of decades.

Perhaps the greatest appeal of the Legion of Superheroes title is the same as that of science fiction television and motion picture concept Star Trek. The future is a utopia. The Legionnaires assist a coalition of races happily coexist, called the United Planets. The Science Police otherwise patrol the Earth. There are occasional alien invasions to repel, and threats brought by super villains, but little crime. Teens were the ones with the power to determine their own fate. In the middle of the Cold War, the universe of the Legion of Superheroes brought solace that at the end of the day everything was going to be ok.

Remarkably, despite being recently introduced into the popular television series Supergirl, the Legion of Superheroes is presently not in print and has not been since 2013. This is a position very far away from 1984, when DC Comics decided that both the Legion and its other very successful title, the New Teen Titans, would be printed on expensive and high quality Baxter paper. That decision reflected the fact that both titles were the flagships of the publisher. That is sadly no longer the case.