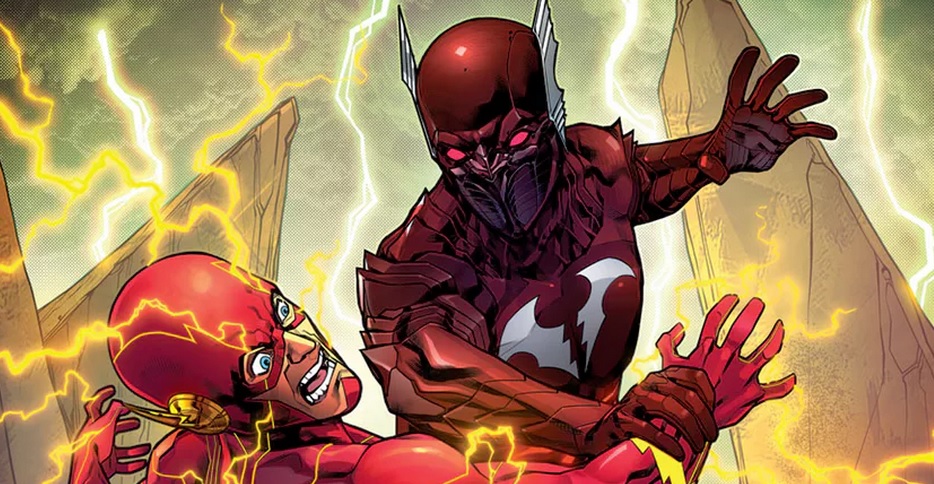 Batman: The Red Death is a tie-in comic book for American publisher DC Comics’ Dark Nights: Metal cross-promotional exercise. This event focuses on multiple alternate reality versions of the Batman character assaulting the mainstream DC universe after being manipulated by an ancient monster named Barbatos. The Red Death tells the story of one of these malevolent Batmen, specifically one that has super speed powers. It is a story of decay.

Please bear with us as this gets very confusing.

The story starts both in and with one of the aforementioned alternate realities. This universe is apparently not part of DC Comics’ broader multiverse. It is destined to be culled, as part of reality trying to restore internal balance (a manifestation of editor as God). This universe’s inhabitants are doomed simply because they were born on the wrong universe. This is as good an explanation as we can provide for the backdrop to the story. If it sounds ridiculous, that is because it is ridiculous.

We are introduced in this title to the reality’s Batman, who is very much like his mainstream counterpart in the sense that the character is singularly driven and will sacrifice friendships in the pursuit of his own brand of justice.

This alternate reality Batman is desperate, knowing that his world will end and that he no longer has time to think of any countermeasures. But instead of resigning himself to fate, Batman decides to give himself some more time by stealing the super-speed powers of his universe’s version of The Flash. For many years, Batman has been depicted in various DC Comics’ titles as a master strategist and manipulator. Batman’s purloining of the Flash’s powers is achieved through the obligatory display of Batman using gadgets and strategy to outplay the much stronger, faster Flash. This includes using the ridiculously vague methodology of tying the Flash into the hood of the Batmobile.

Batman then uses his newfound superspeed to brutally kill all of Gotham’s supervillains, demonstrating that he has exchanged his moral compass for super powers. But unfortunately he still knows of no way to save his reality from being expunged. This is where one of Barbatos’ minions enter, preying on Batman’s desperation and offering the chance at a different reality-one that Batman purports to be unfairly destined to survive in place of his own.

We do not have any complaints about the writing in Batman: The Red Death. But ultimately it suffers from the same flaws of many tie-ins to big comic book events, in the sense that, from a literary perspective, it is a wholly unnecessary exercise in plot navel gazing. The story does not provide anything of value outside of information that could otherwise easily be provided in a couple of panels in the main titles.

Additionally, the story itself comes off as sloppily assembled out of numerous reinvented wheels. The most apparent aspect of that is Batman’s capture and enslavement of the Flash. Batman turning on his allies is not novel, since even the mainstream version of the character has a predisposition of doing so if it aligns with his goals. We mentioned at the beginning of this review that the title is a story of decay, and here is an example. Just once in this decade we would be pleased to read a story where Batman offers to die for the benefit of his peers. See for example the 1981 story in Justice League of America #186, where Batman apparently sacrifices himself to save his fellow Justice League comrades by sitting atop a Soviet missile to lure an unstoppable threat into space. Those sorts of altruistic Batman stories are a thing of the past, as the character seems to be a victim of moral decay. It had been a long time since Batman has been a role model.

The element of having alternate realities, and crossovers between each of these and the mainstream one, at this point, is already so common in the superhero genre that they turn into one big blur in a regular comic book reader’s mind. Both DC Comics and its main rival, Marvel Comics, have done this so many times that every new event they launch only serves to further muddy their already convoluted continuities, turning away potential new fans while doing nothing to excite regular readers. And here is the second perception of decay. The fundamentals of this title suggestthat the writers and editors of these companies are preoccupied in an iterative process of creative composting. The concepts of yesteryear are mulched and recycled. Alternative realities are a particularly pronounced example of this. Does the readership really crave multiple, increasingly ruthless versions of Batman? Compost smells, because it relies upon organic rot to work. We wonder why comic book writers would assume the depleting role of worms in that process, other than the stark reality that they have bills to pay.

(There is a stark contrast to be made between DC Comics and Image Comics. The later has an innovative publishing philosophy. The former cannot break out of risk-avoiding concept churn.)

We cannot recommend Batman: The Red Death to any reader. On its own, there is very little purpose or innovation to warrant the read. Support for the comic only serves as encouragement for DC to continue pumping out large, creatively bankrupt comic book events that unsuccessfully prioritize flashy marketing stunts over solid storytelling. Help stop the rot, and avoid it.