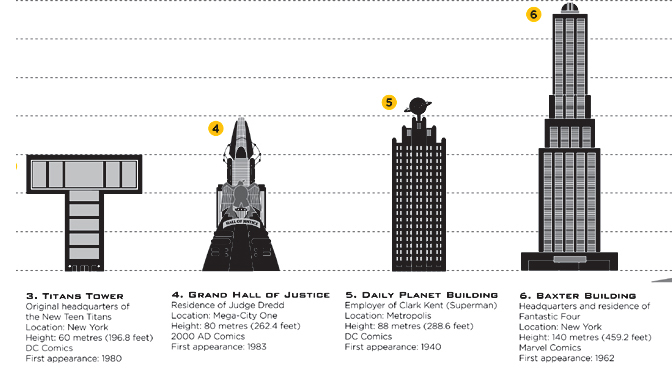 Structures which seemed enormously grand in the 1940s – 1980s are now dwarfed by contemporary architecture. This has been mirrored in comic books.

Some of the buildings which have appeared in the past were either mirrors of actual buildings (the Daily Planet building and the Superfriends’ Hall of Justice) and some were the buildings themselves (most obviously, the All-Star Squadron’s headquarters). More recent buildings appearing in comics project their own unique gravitas.

To scroll across and see all eleven of the buildings and their details of location, height, and first appearance, all contained in the .pdf version of this chart, click [here].

(With sincere thanks to Cave Design)

A dream! A hoax! An imaginary story!