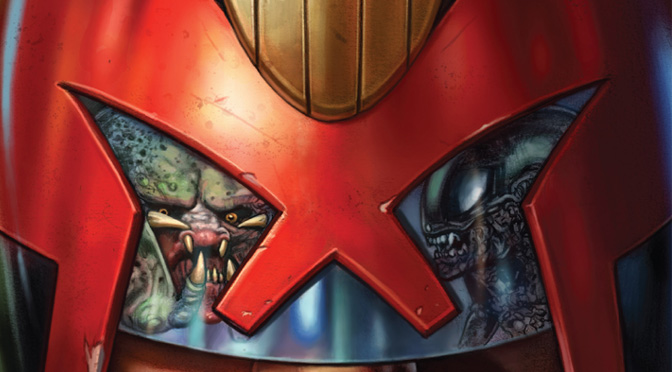 “Predator vs. Judge Dredd vs. Aliens” is a crossover comic book from American publisher IDW Publishing. As the title suggest, it features three extremely popular science fiction franchises. The central figures of each go head-to-head against each other in a story that is expected to favor flashy action over narrative depth. (“Predator” began its life as a motion picture starring action actor Arnold Schwarzenegger, and features a monstrous alien which hunts humans. “Alien” is a series of motion pictures involving a terrifying “xenomorph” species with acid for blood, retractable jaws and a penchant for laying eggs inside its human victims.)

Do not envy the task of a writer who needs to craft a solid, coherent and believable inter-franchise crossover, especially if the characters exist on completely separate and incompatible universes or timelines.

But to his credit, author John Layman manages to set up a story that does not require a strained suspension of disbelief, beyond the typical amount which an average sci fi comic requires. Helpful to that is the setting: the owner of the Judge Dredd properties, 2000 AD Publishing, has a locale in its continuity called the “Cursed Earth”. This is a place intentionally kept vague beyond its description other than as an irradiated wasteland in Judge Dredd’s post-apocalyptic world. It is a place inhabited by mutants, robots, and monsters. A Predator and a Xenomorph Alien would not be too out of place.

“Predator vs. Judge Dredd vs. Aliens” explains how the three franchise elements interact by starting with a Predator finding itself stranded in a swamp land called the Alabama Morass. Ironically this location is stalked and hunted by a group of animal/human hybrids who consider the swamp their territory. The Predator is overwhelmed through sheer numbers and is taken alive to the beasts’ leader – a mad scientist whose genetic experimentation is said to be responsible for the existence of the swamp’s savage denizens. The Predator’s ship is also ransacked, its weapons sequestered along with its trophy room. One trophy in particular caught the mad scientist’s interest: the skull of a Xenomorph.

The comic then shifts to the perspective of a group of Street Judges, located in a future city called “Mega City One”. Street Judges in 2000 AD’s continuity universe are paramilitary units who serve as judge and police officers, giving them complete and often brutal authority to apprehend, try, and sentence criminals on the spot. This cohort is led by Judge Dredd and the psionic Judge Anderson. They are on a manhunt for a criminal cult, the members of which they manage to apprehend while the leader escapes in the direction, inevitably, of the Alabama Morass.

Dredd is advised to let the cult leader go as Alabama Morass is reputed to be a dangerous place where trespassers are never allowed to leave alive. But the Judges – and particularly Dredd’s – strict code forbid letting criminals go unpunished. And so they decide to head towards Alabama Morass in pursuit of the fugitive.

The final few pages of the comic succeeds in placing all the key players on the proverbial chessboard – with the mad scientist deciding to clone the Xenomorph (and anyone familiar with the Aliens franchise know where this will lead to) utilising the skull trophy, the captive Predator being experimented upon, and the revelation of a group of trespassers consisting of Predators who have followed a beacon left behind by their comrade. The stage is set for a potentially enjoyable, if somewhat mindless, battle royale between Street Judges, Predators, Xenomorphs, and the hapless mutants of the Alabama Morass caught in between.

This comic should not be approached with high expectations other than to witness popular sci fi characters duke it out. But to give credit where it is due, this first issue manages to build a solid narrative with a believable explanation as to how these characters from vastly different continuities managed to not only coexist but meet each other in combat. This is a commendable departure from the average comic book crossover hack tactics where morally upstanding characters regularly get into fisticuffs over a simple misunderstanding or through a convenient “mind control” plot device.