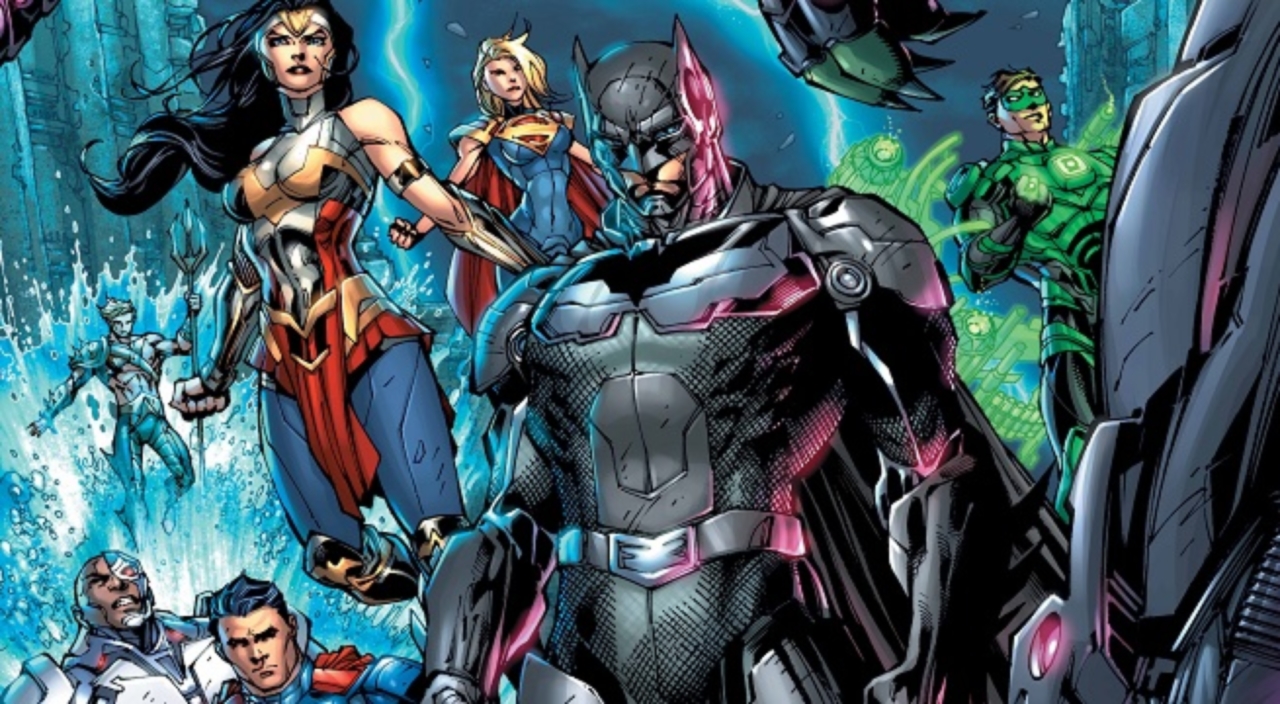 “Injustice 2” is a comic book mini-series, from US comic book publisher DC Comics, that serves as a marketing tie-in and prequel to the upcoming videogame of the same name. The “Injustice” franchise has an odd pedigree. The first volume originally started as the prequel and tie-in to the 2013 video game “Injustice: Gods Among Us,” but the comic was handled well enough that the series ran for several years, curiously outlasting the shelf life of the game upon which it was based. By the time the comic book title wrapped up, the “Injustice: Gods Among Us” video game was being sold in bargain bins of retail outlets.

The premise for the “Injustice” franchise is dire. It tells of an alternate reality future where the nigh-omnipotent and superhero Superman has turned into a dictator and placed the entire world under his totalitarian rule. DC Comics’ other primary character, Batman, leads the opposition. The rest of DC Comics’ expansive roster of super heroes and super villains take sides between Superman’s regime and Batman’s insurgency.

The “Injustice 2” comic picks up where the video game left off, with Batman and what is left of his insurgency successful. Superman is locked inside a prison cell designed to mimic a red solar environment (Superman’s alien physiology has long been depicted as capable of being depowered by conditions replicating a red sun.) The ranks of the other characters have been substantially thinned out by the conflict.

Despite sharing a lengthy history within DC Comics’ continuity as friends and colleagues, the dialogue between Batman and Superman is cold and full of contempt. This is not mischaracterisation on the writer’s part, but a natural evolution of the relationship between these two heroes as a result of the brutal events depicted in the “Injustice” series.

Here, we get a glimpse of Superman at his lowest – both physically and emotionally – as he breaks down and blames Batman for everything that happened. We see what happens when a man who trafficked in absolute power and control is left with neither. Superman resorts to emotional blackmail and tries to get a rise out of his former friend, even resorting to bringing up the death of everyone Batman cared about, including his own parents. The Batman mythos is grounded in the episode of a youth watching his parents be horribly murdered in an alley, and the young boy traumatised into avenging his parents as the grim but altruistic Batman. Superman is depicted as sinking to a malign, cold, indigo depth.

The exchange was overheard by Harley Quinn. This popular character is the former sidekick of Batman’s nemesis The Joker. In this storyline, Harley Quinn has joined the insurgents. The relationship between Batman and Harley Quinn is interesting. Batman keeps Harley Quinn close because she is too dangerous and mentally unstable to be given free reign. But this desire for proximity is misconstrued by the former villain as dependence, trust, and an indirect invitation to become a sidekick of the Batman.

The whole exchange between Superman and Batman serves as springboard to “Injustice 2″’s storyline. Nature abhors a vacuum, and so with Superman’s regime gone, something has to take its place. Superman mockingly assumes that this will be Batman and his confederates.

But the cliffhanger ending points to something else. A longstanding morally ambivalent character named Amanda Waller abducts Harley Quinn.

Amanda Waller is a key part of a title called “Suicide Squad”. Recently made into a very successful action motion picture, the premise of “Suicide Squad” is that costumed villains are shanghaied into secret government military missions. This issue implies that the Suicide Squad, in this alternate universe, is being rebuilt.With Batman keeping a close eye on Harley Quinn, writer Tom Taylor ensures that Batman and Amanda Waller will engage in confrontation.

It is not surprising that the popular Suicide Squad is to be brought into the story. “Suicide Squad” is one of DC Comics’ franchises that has crossed over into mainstream appreciation via the recent movie adaptation. But it is not a very interesting development narrative-wise. Given that the members of the Suicide Squad are a motley crew of B-level villains that are dysfunctional at best, the inevitable conflict is likely to be underwhelming. It is difficult to believe that this group would be able to replicate the paramount degree of threat as that of Superman and his regime. As intimidating and Machiavellian as Amanda Waller can be, Batman, long-depicted as a tactical genius and the world’s greatest detective, would in any fair story make short work of the threat that Amanda Waller represents.

Hopefully, the reformation of the Suicide Squad is a red herring – a small part of a bigger threat.

Our disclaimer for this review is comprehensive enjoyment of this title series requires familiarity with the original “Injustice” prequel or the first videogame. But we can recommend “Injustice 2” as a decent mini-series that treads the well-worn path of alternate reality deconstruction linked with subversion of superhero moral codes. The writing is taut and engaging.