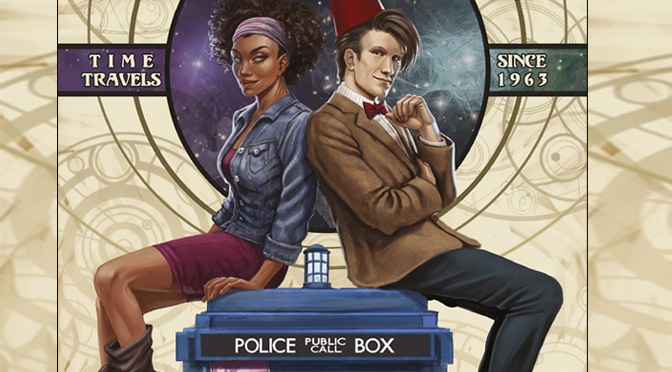 Doctor Who is a United Kingdom science fiction television show which has, rather than consistent commercial success, at the very least established a solid obsessive fan base. These fans collect Doctor Who-related paraphernalia which includes this comic book series.

The premise of the show is that the lead character, the Doctor, an alien called a Time Lord, travels about in a vehicle called the TARDIS through both space and time. The Doctor thereby engages in various adventures with a variety of mostly human and female sidekicks. Whenever an actor playing the character leaves the show, the Doctor undergoes a dizzying metamorphosis whereby the previous actor is replaced by the new actor. It is a somewhat odd mechanism for replacing the lead cast member but which has become an exciting feature of the series: fans indulge in speculation as to the temperament of the new incarnation of the Doctor, and have their favourite versions. As a consequence of the inherent mechanism of time travel, some of these incarnations occasionally meet but act as if they are different people.

This issue is otherwise concerned with a battle sequence, where giant gods called Cyclors are busy killing a race of people called the Overcaste – “seeking ascension via genocide!”. The War Doctor comes up with a solution: a device called a Psilient Songbox which destroys people’s belief in gods. It is a thoughtful concept from the writer, Rob Williams: to kill a god, one must cease believing in the god.

The highlight of the issue however is the stalking of a supporting character called Alice Obefune by a disturbing robot of a group or organisation or robot species called the Volatix Cabal. The robot mutters away to itself as it navigates a cave.

“Friends! We create! We build! We take apart and make new dripping things!”

The robot laments at one point that it wishes it had a nose so as to better track the scent of its human prey, resolving to take and wear Obefune’s nose so as to acquire that ability. It is a creepy sequence, the horrified silence of Obefune, hiding in order to avoid being sliced up by the murderous robot, in contrast with the robot’s macabre chattiness, all written with finesse.

Some of the plot is going to be impermeable to casual readers. When a squadron of Gallifreyian star ships attack one of the gods in a “prydonius formation”, the War Doctor furiously and pointlessly shrieks at them to stop: only a reader who understands the very convoluted backstory will know that these starships are from the Doctor’s home planet. At one point the War Doctor tells a supporting character not to call him the Doctor: only someone who has watched the 50th anniversary television show will know that this character eschewed the title. And some of the dialogue is eyebrow-raising:

“Paradox! It’s a paradox!! Here! Now! And its reacting to the Psilent Songbox – all of our minds, connected. All of the possibilities: like pouring napalm onto a fireworks factory! Past – future-now – all collapsing into each other! No timelines. All the timelines! Complete chronal meltdown!”

For those of us who do not dwell in the maze which is the Doctor Who mythos, it is nonetheless an entertaining enough story.