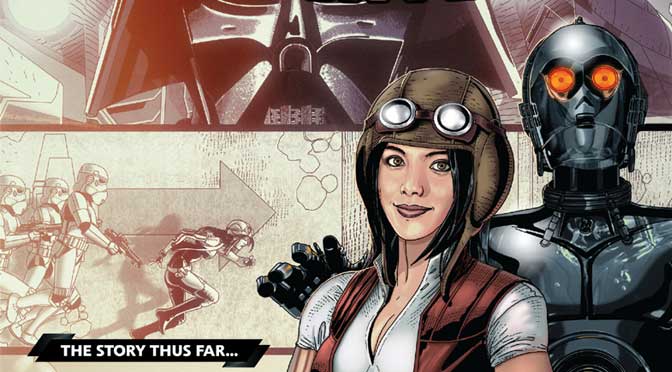 “Doctor Aphra” #1 marks the start of a new ongoing series from American publisher Marvel Comics’ line of “Star Wars” comic books (facilitated by multinational entertainment company Disney’s ownership of both Marvel Comics and Lucasfilms Ltd, the latter being the corporate vehicle for the Star Wars properties).

The title features a female character created originally as a side character in the recently published “Darth Vader” comic book series. The character is, curiously, a rogue archaeologist (which should be a concept overflowing with potential, given the setting). She is characterized as a technological and mechanical savant, an above average marksman, and a risk-taker only kept alive by quick wits and willingness to commit morally dubious acts. Despite (or perhaps because of) the conceptual similarity to the “Lara Croft: Tomb Raider” franchise, Aphra stands out as one of the few likeable antiheroes in a franchise full of characters that only deal in moral absolutes.

Aphra had an intriguing professional relationship with the psychologically unstable (and as theorized by psychiatrists and psychologists from Tolouse University Hospital in France – suffering from borderline personality disorder) villain Darth Vader. Aphra impressed Vader by fulfilling her tasks exceptionally well while acknowledging her expendability, going so far as to request death by lightsaber once she outlives her usefulness (in order to secure a quick, painless death.)

It evolves that this is part of a ploy by Aphra. The introduction in “Doctor Aphra” #1 did not provide specific details, but it is made clear that Aphra left Vader’s employ by faking her own death. The new series follows Aphra, a pair of homicidal droids, and a Wookie Warrior named Black Krrsantan as she tries to make a living hunting down rare artifacts across the galaxy, all the while staying clear of Vader and the government for which he works, the Empire.

Setting aside “Lara Croft: Tomb Raider”, it is also hard to avoid comparisons between Aphra and Star Wars’ iconic smuggler, Han Solo. On the surface, Aphra is a female version of the character made famous by actor Harrison Ford. Aphra is accompanied by a Wookie, and has a couple of droids that could be mistaken for R2-D2 and C3P0 where it not for their color. She even has her own trade mark ship, the Ark Angel. And as the first issue shows she has outstanding debts to shady gangsters and mob bosses across the galaxy. All of these elements borrow heavily from the Han Solo property.

Though to her credit, Aphra seems to genuinely want to avoid causing unnecessary harm. She saves herself from a loan shark’s goons with Black Krssantan’s help, but prevents the Wookie from killing anyone, even offering to come back and increase her payment in order to cover the damage they caused during the inevitable tussle.

The two droids are very loyal to Aphra, but are autonomous and would protect her even if it means withholding information and doing things without her permission. The droids decide upon themselves to follow the loan shark back to town and assassinate him, while telling Aphra that they are only going to look for supplies.

The main theme for the series so far seems to be Aphra wanting to start fresh and stay out of trouble, while dealing with the consequences of mistakes and morally questionable actions committed in the past. The cliffhanger ending has Aphra failing to cash in on her loot after getting her archaeology doctorate revoked (revealing that she only became a “doctor” by cheating).

We can recommend “Doctor Aphra” #1 to fans of the Star Wars franchise, especially those looking for a new and intriguing character to follow rather than the old names which have been well-explored particularly in novels and cartoons. Full appreciation of the story will require familiarity with the backstory established in the pages of the “Darth Vader” comic, but this first issue does a serviceable job of introducing the character to new readers. Additionally, the burden of existing continuity is not as heavy given that the general trajectory of the story has Aphra purposely avoiding major elements of the franchise’s main story.