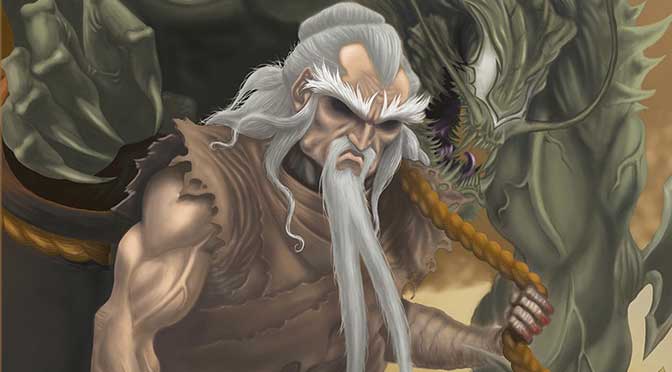 Many independent comic creators have turned to the fundraising site Kickstarter.com for investment, with varying degrees of success. Thomas Sluzalek, the writer and artist of this new title, “Shaolin Grandmaster Killer” is one of them.

Notwithstanding the grandiose and Chinese martial arts-inspired title, this story is submerged in a decidedly British comic book ethos. By this, we refer to the off-best science fiction- themed comic books published by 2000AD Comics, the influence of which is a monolithic shadow over the British comic book scene since the late 1970s. This is most evident within “Shaolin Grandmaster Killer” upon examination of the denizens of a dystopian establishment, a lawless, futuristic and decadent black market, located on the back of a flying and “tamed” kaiji called Megara. People with 1980s mirror shades, spikes for hair, and a total absence of civility occupy this haunt. Undiluted violence and gore abound. Drugs, alcohol, slaves and sex are the stock in trade, but also, quirkily, classic action figures. It would not have been out of place in this morally toxic but oddball habitat to have stumbled upon Captain Skank, a cyborg foe of 2000AD Comics’ Judge Dredd, or 2000AD’s Strontium Dogs.

The plot is straightforward enough: a hungover and disgraced kung fu master (borrowing directly from the martial arts classic motion picture, “The Drunken Master”) needs wine, and stumbles into the flying black market seeking to quench his thirst. Inevitably the master comes into conflict with a criminal cartel called the Black Axe Gang, who run the market. Thugs are slain with gruesome ease, and at the conclusion the protagonist is recognised by a character who has just bought the notorious master’s action figure.

But there is much more to this comic which is genuine and novel, and that is mostly to do with the protagonist. The grandmaster’s name is Gu. Readers first meet him lying in pain upon the lap of a statue of Buddha, in a scene entirely reminiscent of Ruben’s classic, “Prometheus Bound”. Gu is surrounded by death and dust. “A graveyard which looks like a desert. It’s hot and dry and smells burned. Hell can’t be much worse.” This is Gu’s legacy. The character brought death to the Shaolin Grandmaster (with the unlikely name “Bruce D. Dharma”) and his followers, and in doing so cast humanity into the pit.

In fiction, when evil triumphs, the victor is ordinarily bathed in the spoils of power. But Gu is not gleeful, arrogant or tyrannical like most villains. Instead, he is an alcoholic, living amongst the bones of his victims, suffering from nightmares, hallucinations, and agoraphobia. Gu appears to be tortured by a schizoid inner voice which manifests as a demon: “Yesss! That’s the way! Kill everything in your path! Shut up! I just hate snakes is all.”

Gu lurches into the market and happens upon a violent scene. A penniless old man has been caught trying to sneak into a wine shop, Gu’s destination. The Black Axe Gang resolve to beat the old man for their own amusement. A slimy but well-meaning pimp tries to save the old man and for his efforts the pimp loses the top half of his head. Gu’s involvement is more or less accidental. He tries to gruffly bypass the thugs, to no avail. After a slowly heating interaction whereby the arrogant gang members sneer at Gu, the aged grandmaster is finally taunted as a hero. This is the tipping point. “I am no hero!” thunders Gu as his paramount Shaolin powers manifest in a terrible glow of energy.

In this regard Gu is an inspired concept. Gu is no classic villain. Having achieved what he wanted through treachery and the malevolent use of his powers, Gu is haunted and finally provoked by the accusation of what he is not. Profound guilt, not evil, rests in his tortured soul.

The text could use some polish (surely a “Kung fu boom” would be better worded as “the proliferation of Kung fu mastery”: “You are a rockstar! A rockstar of death and destruction that is.” is eyebrow-raising when delivered by Gu’s demon). This is a perhaps inevitable consequence of the absence of editorial insight which besets many independent publications. But at the same time other monologues constituting the skeleton of the backstory are counterintuitively inspired. This, from a dreamt flashback to a poignant time when Gu had a forlorn victim as a lover, a statement of adoration wrapped in a brutal character assessment, delivered in a nightmare:

“You’re wicked and ruthless. A wild and untamed animal. More beast than man. That’s why I fell in love with you.”

In what appears to be a slightly self-effacing interview at the comic book’s conclusion, Mr Sluzalek says that he gave up on the genre some years ago because of his assessment that his drawing was not up to scratch. In that self-judgment, Mr Sluzalek overlooks his obvious strength: characterisation.

This comic is available from Kickstarter.