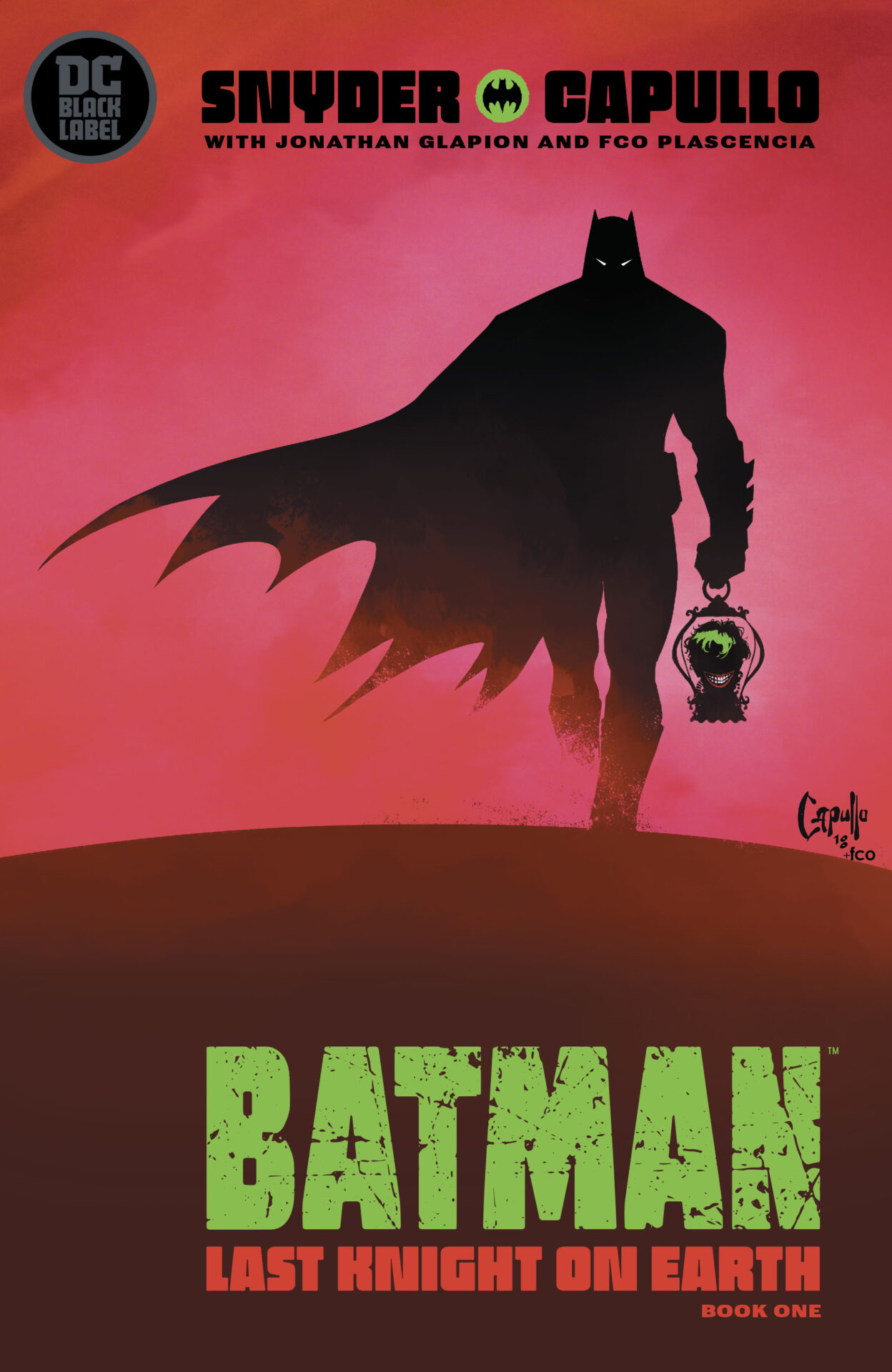 Too many parents with babies know that crows like exploring old diapers. The birds have a bad habit of getting into garbage bins, left on the roadside for emptying by sanitation workers, with the lid ajar. A crow will strew the contents down the street. Diapers replete with baby poo make for poor content for your kerb. It’s an embarrassing, disgusting mess which you are reluctant to clean up, but must, and quickly. Anyone familiar with this concept will nod with recognition upon reading Batman: Last Knight on Earth.

Writer Scott Snyder dishes us up his fan fiction mimicry of Marvel Comics’ Old Man Logan by Mark Millar, or perhaps Mark Waid’s Kingdom Come. It has the finesse of a dog slobbering on a dried pig’s ear. Determined to ensure that superhero comics are a creative slum of contemporary American literature, Mr Snyder drops as many obscure DC Comics references as possible in conveying just how bad the apocalypse of his plot had become. Instead, he demonstrates just how bad his plot is. An Easter egg mash-up is no substitute for good writing.

And so as Batman and the disembodied head of the Joker travel across America, just like Wolverine and Hawkeye in Old Man Logan but by hang glider instead of by beach buggy, we see concepts such as Wonder Woman with a mohawk haircut and a facial scar leading an all-female team called the Amazons: the Flash and other DC Comics speedsters helplessly caught in a Speed Force vortex: the Spectre’s green cape laid out as a geographical feature: Batman’s Commissioner James Gordon as a long haired hippie: and innumerable references to the likes of the Clay Wars (Clayface is a Batman villain), Grundy pits (Solomon Grundy is a Justice Society villain), imp deathgrounds (a reference to Superman’s nemesis, Mr Mxyzptlk), the Plains of Solitude (a variation of Superman’s Fortress of Solitude) and and so on, all to add to the tediousness.

It had started with such promise. Batman investigates a chalk outline at Crime Alley, the location of his parents’ murder, and finds a boy on his knees, resembling a young Bruce Wayne. But the boy is long dead, horribly decomposing, and Batman faces a trap. A radio-controlled mechanism caused the dead boy’s arm to raise and shoot a startled Batman at point blank range. Batman awakes to find himself in Arkham, an insane asylum located in fictional Gotham City. In a plot twist reminiscent of the excellent motion picture Shutter Island, Batman is told he was never Batman and that he is, hopefully, finally cured of the delusion. The story then draws upon the equally good movie Inception. A remarkably striking match cut scene has Batman abruptly climbing up and out of red dirt, leaving the fake Gotham for a desert, wearing his cowl and a straight jacket. But it is this particular page which is compelling:

At that point, however, the story transforms into a train wreck. It just happens that Batman has popped up next to the Joker’s head in a glass jar. How the Joker’s head is in a jar is not revealed. The Joker provides some narrative guidance at the beginning of the story (we are led to believe that this might instead be the voice of Batman’s loyal butler and father figure, Alfred Pennyworth). By the end of the story, the Joker’s head is somehow affixed to a robot Robin body featuring machine guns, and he has a dirty rag as a mask wrapped around the glass jar. The only thing we have ever seen on par to this is Geoff Johns’ Justice League where Mr Johns weaponised a baby.

On the other hand, the art in this title is dynamic and vibrant. Batman has never been depicted better. We are reminded of the story that when actor Guy Pearce was filming in The Time Machine, he would periodically give the camera man a signal using his fingers. The number of fingers would indicate the age group the motion picture was now aimed at, and it was a declining figure as production grinded on. We wonder whether artist Greg Capullo had the same sensation as the comic progressed and the quality of the script collapsed.

We understand that in China counterfeit calamari (sliced squid) is made from pigs’ anuses, and that they are virtually indistinguishable from each other. Here, instead, we know what we are chewing is a pig’s anus and, really, we should never return to the vendor. If DC Comics’ quality of contemporary output have dropped to this new low, we should just review classic titles.  For the benefit of the people at ComicBookRoundup.com www.comicbookroundup.com , we give this collected volume one out of ten. The one represents the first twenty-three pages. Beyond that, it has no value.