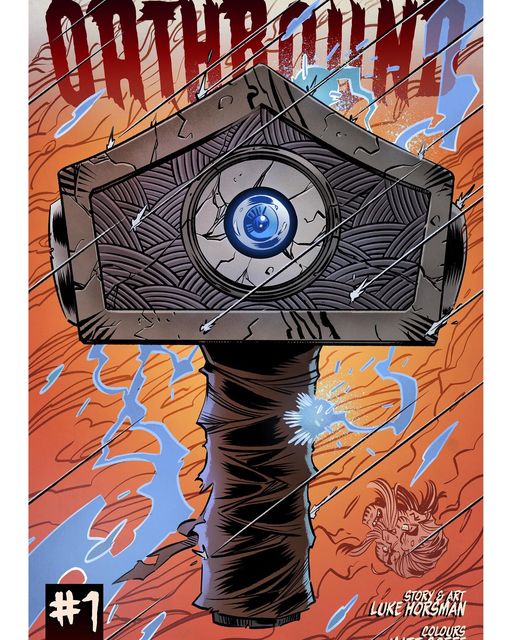 The tagline to this title is “Norse Saga inspired tales”. We seem to be reaching the tail end of a trend towards Scandinavian folklore, perhaps initiated by the success of Marvel Studios’ Thor motion pictures, beginning in 2011, and perpetuated by Neil Gaiman’s 2001 novel American Gods being adapted for television in 2017, followed by Mr Gaiman’s 2017 best-selling book on Norse mythology. Norse trickster god Loki is often found in CW’s evergreen television series Supernatural. In 2018 author Joanne Harris wrote the popular novel The Testament of Loki, the second of her novels about the character, following on from 2014’s The Gospel of Loki.

If the trend is reaching exhaustion, then this comic, Oathbound, lets it go out with a glorious and vibrant bang. Writer and artist Luke Horsman is an experienced comic book campaigner, having worked for iconic British comic book publisher 2000AD. You can quite clearly see that experience reflected in the beautiful art. The sails of Odin’s longboat, the character rendition of players such as Loki, and the stunning rendition of the creation of the universe cause the eye to pause over the detail.

The plot to an extent is already set by the mythological traditions contained in the Prose Edda, composed in the 13th century by Snorri Sturluson, and the Poetic Edda, a collection of poems from earlier traditional material anonymously compiled in the 13th century. But there is room to manoeuvre, and especially in respect of the dialogue. Loki is cold and haughty, and Odin is furious and astonished that his missing eye has somehow been “misplaced”. The disembodied head of Mimir gets the best comedic lines, telling Loki to trim his fingernails while being held aloft by the cheeks, and blaming his loss of memory of the loss of his body: “You’d be surprised what having your head severed from your body will do to a man”. Readers of 2000AD’s titles will recognise the droll, dark humour.

Our only complaint is that this issue, for being so entertaining, is too short. We could have sat and read it for hours. The title is available for purchase on Mr Horsman’s website: https://littlerobotdesign.co.uk/shop-page/