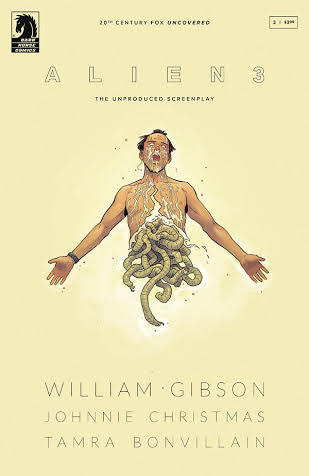 A few months ago, we became so excited about the prospect of William Gibson’s “lost” (or at least, neglected) script for the third Alien movie being turned into a comic that we did not wait to write a review. Here is that belated critique.

The comic does not disappoint. Mr Gibson continues the tradition of borrowing indicia from Joseph Conrad’s novels (the interstellar freighter Nostromo shares its name with one of Mr Conrad’s novels, and Sulaco is a town in the same novel: the warship Sulaco appears in the second motion picture). Mr Gibson introduces a character called Kurtz. Kurtz is the out-of-control colonialist in Mr Conrad’s classic novel Heart of Darkness (and is the name of Marlon Brando’s character in the motion picture Apocalypse Now, which is based on Heart of Darkness).

Alas, this Kurtz does not have much of a speaking role. Upon boarding the Sulaco, Kurtz is a victim of the titular alien. Due to a navigational error (later revealed to be deliberate – the sinister corporation Weyland-Yutani is up to its old tricks), the Sulaco enters the territory of the Union of Progressive Peoples. Kurtz and his colleagues from the UPP scout out the Sulaco and he is infected and left behind. The android Bishop, torn in half in the second motion picture, is hauled away.

Most of the action takes place in a space station called Anchorpoint. It is being wound down as non-viable. Weyland-Yutani, having used the Sulaco as platform for a biological strike, contain the xenomorph (the term used to describe the now infamous nasties) with Anchorpoint. The inhabitants of Anchorpoint work that out too late in the piece.

There is one aspect of the comic which dates it. The Soviet Union and the People’ Republic of China may have merged as the UPP in this particular future, if the surnames (Chang, Nevsky, Kurtz) are any indication. Mr Gibson notes in the preface to the twentieth anniversary edition of his novel Neuromancer that, writing in the early to mid-80s, sweeping the Soviet Union under the carpet was a bit of a stretch. No one could have guessed the collapse of the Warsaw Pact from 1987 to 1991, and writing science fiction which did not feature a Soviet Union was unbelievable wishful thinking. Thus we have an interstellar extrapolation of the Cold War.

This comic is a fine read. Mr Gibson clearly devoted enormous thought to the script. We have previously noted that Mr Gibson’s skills in descriptive text do not translate well into comics. It now seems that we were incorrect in that assessment. Even having read the original script, we look forward to the conclusion of this comic.