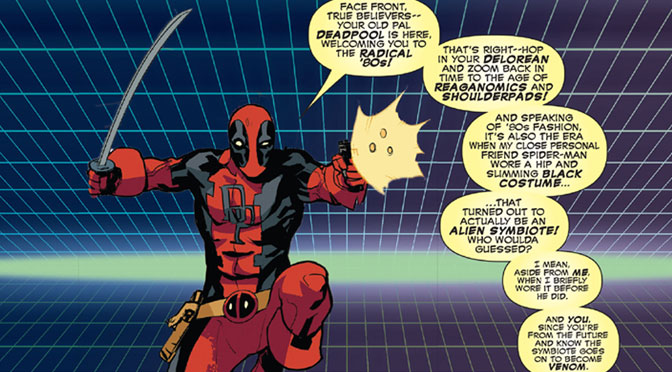 The character “Deadpool” occupies a unique space in American comic book publisher Marvel’s rich portfolio of properties. While Deadpool is part of the continuity shared by all of their mainstream properties, the character is given the ability to break the fourth wall in a humorous way, but attributed to schizophrenia.

It is unfortunate that a serious mental disease is used as a vehicle to give writers freedom to tackle subject matters that would otherwise not be possible when held to a stringent editorial direction (in 1989, American comic book writer John Byrne in “Sensational She-Hulk” had the characters address the reader without the need to explain why).

But in any event, as a result, Deadpool’s participation in any story usually takes on a satirical tone that is just as likely to poke fun at the narrative as easily as it would call out the idiosyncracies inherent in the American comic book industry.

“Deadpool: Back in Black” #1 reveals an untold tale regarding Deadpool’s purported history with a black alien symbiote which for many years served first as Spider-Man’s costume, and then Spider-Man’s nemesis, called Venom. Told through flashbacks, this history is inserted before the events of the 1984 Marvel Comics crossover event “Secret Wars”, where Deadpool apparently managed to get a hold of the costume first before rejecting it after realizing that it wants to “bond” (enter into an immersive parasitic relationship) with its host. Deadpool’s recollection of events also reveal that the symbiote eventually found its way to him in his time of need, after Spider-Man rejected it (again, out of fear of the symbiote’s tendency to bond with its host.)

For those concerned about such things, given the “Deadpool” comic’s satirical format and Deadpool himself portrayed as, at best, an unreliable narrator, “Deadpool” #1 is not to be taken seriously and probably falls outside of Marvel Comics’ governing continuity. It is possible that the comic itself is canonical to Marvel’s mainstream continuity, but the events depicted are a fabrication of Deadpool’s hyperactive imagination. The comic in general does a good job of limiting reliance on past continuity – there are expository scenes that provide a semblance of context to the more obscure references. Further, there are also fake continuity citations that poke fun at this over reliance on past issues. Writer Cullen Bunn to his credit does not hesitate to put muddy footprints all over continuity concerns.

“Deadpool: Back in Black” #1’s story may not have a lasting effect or a significant purpose on Marvel Comics’ massive shared continuity, but it offers a light, enjoyable read for “Deadpool” fans. The story is full of the franchise’s trade mark irreverent humor with a smattering of somber scenes (the comic portrays the symbiote costume as a sympathetic creature akin to an abandoned pet, instead of a vicious alien monster.) We can recommend this comic to readers looking for a fun comic to read, albeit with the disclaimer that familiarity with the Spider-Man franchise and the Secret Wars crossover will be a requirement in order to enjoy all the references and in-jokes.