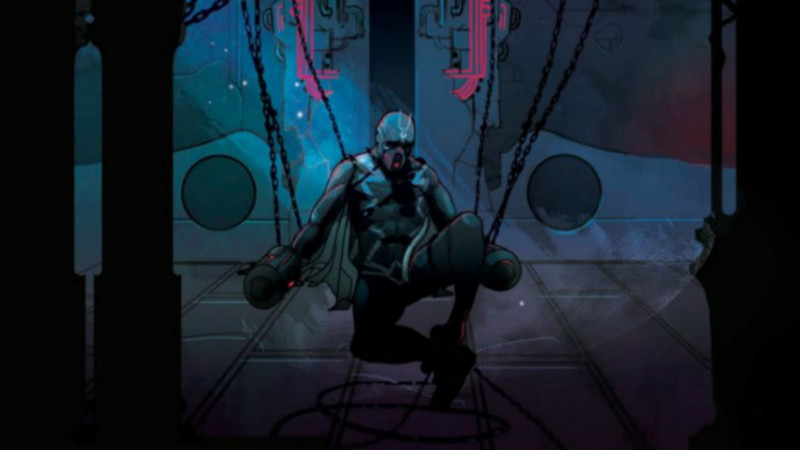 “Black Bolt” is a new comic book series from American comic book publisher Marvel Comics. It centres on the title character, the crowned king of a fictional race of enhanced humans called “The Inhumans.” Black Bolt is notable for being voluntarily silent because his superpower – the ability to harness vast stores of energy – is linked to the speech center of his brain. The slightest attempts to use his vocal cords results in “quasi-sonic screams.” These screams are catastrophic. For a character in the medium of comic books, where half of the story is traditionally conveyed in word balloons, it presents almost unique predicaments for the character’s writers.

The story of “Black Bolt” #1 has the protagonist waking up in a mysterious prison designed to hold beings that possess powers. Black Bolt himself is fitted with a muzzle that prevents use of his primary abilities. Since the character is perpetually silent, a huge part of the story relies upon thought captions to provide context. This title is an instance where that sometimes lazy and cliched approach of an inner monologue, made too popular in American comics by Frank Miller’s “Dark Knight Returns” (1986), is warranted. Having said that, reading the adventures of Black Bolt as the character explores the hallways of a mysterious alien holding facility, while his actions and musings are constantly narrated by thought captions, would have been tedious. Fortunately, the action picks up when he happens across, first, a female prisoner being burned alive, and second, the super villain called the Absorbing Man, which he subsequently fights before meeting the Warden of his prison.

The choice of using the Absorbing Man as the issue’s primary villain is uninspired. The character is a Marvel supervillain most often pitted against the superhero Thor, and who has the power to mimic characteristics of any material he touches. But as it turns out the character is also a prisoner and thus his power has been deactivated. The fight is consequently bog-standard and uneventful, given the fact that the Absorbing Man is a fairly uninteresting character sans powers and has no history at all with Black Bolt. The fight serves a singular purpose – a punch from the villain broke the muzzle inhibiting Black Bolt’s mouth. However, as further proof that the Absorbing Man’s threat is trivial, Black Bolt chose to defeat his enemy without using any of his immense powers. But the cliffhanger ending reveals that Black Bolt’s destructive ability has been deactivated. The character is promptly subdued, and returned back to his cell by his captor.

The main problem with “Black Bolt” #1 is not the quality of the writing, but that the issue is not a serviceable vehicle for writer Saladin Ahmed’s skills as a storyteller. “The Man in the Iron Mask” premise is generic. It has been done before in countless other works of fiction. Worse, the events depicted in the issue can only be understood if the reader is familiar with a complex series of events that happened in other comic book titles, an endemic problem with Marvel’s current crop and the fault of the publisher’s 1990s-type sales strategy. Finally, there is no real mystery being built. The reason for Black Bolt’s imprisonment is stated plainly, several times within the comic.

It is difficult to discern what Marvel Comics’ goal is for this comic. It is a suboptimal tactic to boost the popularity of the “Inhumans” franchise (soon to be a major motion picture) by relying on an ancillary title that is on the one hand inaccessible to new audiences, and on the other hand generic and uneventful to longtime readers.