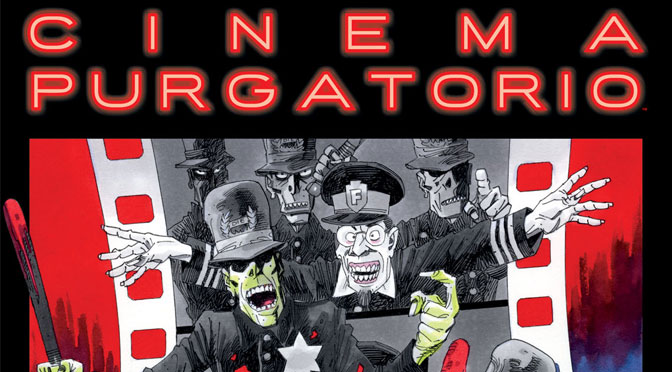 In its introductory pages, “Cinema Purgatorio” #1 essentially describes the strange existence of the cinema-goer: divorced of everyday reality, watching the realities of someone else but unable to intervene, somewhere in-between. It is a state of powerlessness and disconnectedness. If purgatory exists, then the existential ambiguity of the movie theatre would most likely describe it.

On 9 September 2016, the man behind “Cinema Purgatorio”, acclaimed British comic book writer Alan Moore, announced that he was retiring from writing comic books.

What does that mean for this title?

But first, let’s examine the concept at hand. One of American comic book publisher DC Comics’ most innovative titles was “Wasteland” (1987-1989). Written by John Ostrander and Del Close, it was a diamond lost in the effervescent froth of 1980s superhero comic books: a mature horror anthology, and amazingly, issued by a large publisher of superhero comics. (It was avant-garde in the literal sense of being far before its time, and is well-overdue for collection under DC Comics’ “Vertigo” imprint.)

Mr Moore appeared to want to follow down the same path as “Wasteland” but without the need for the big publisher’s backing. In this instance, Mr Moore went directly to the public. According to online project micro funding website “Kickstarter”, “1,621 backers pledged $110,333 to help bring this project to life.” The reported target was $9000. The mystique and cracking track record of Mr Moore was always going to ensure the success of this anthology publication, although Mr Moore’s caustic pitch was also an eye catcher:

“In a world of used ideas spun out into unending single-premise sagas and told in full cyber-enhanced Technicolor, unapologetically we offer up CINEMA PURGATORIO, a black and white horror anthology which reaches for something both new and startling beyond the endlessly recycled characters and concepts of the 60s and the 70s. An anthology, to let its authors exercise the discipline and the invention that only short stories can provide – and out of which the vast majority of today’s memorable franchises were created – and black and white in order to impose that selfsame discipline upon its artists by removing the alluring camouflage of colour and requiring the same values that the classic comic illustrators made their byword….Varnished with blood and Brylcreem, in our razor-collared cutting edge collection we restore the broken-bulb emporiums where, in the creaking backseats, modern terror and monstrosity were shamelessly conceived. In our worn aisles and glossy pages the most individual and inventive talents in contemporary comics are delivering a landmark midnight matinee in monochrome, intent on pushing both the genre and the medium beyond their stagnant formulas and into shapes that suit the unique shadows and disquiets of our present moment. “

This floral prose contains a plain attack on large American publishers. Mr Moore’s relationship with DC Comics is complicated at best. (It did not start off like that.) This relationship has included an allegation by Mr Moore that DC Comics have been creatively dumpster diving in respect of Mr Moore’s throwaway concepts in his 1980s stories for “Green Lantern Corps”:

“I was noticing that DC seems to have based one of its latest crossovers in Green Lantern based on a couple of eight-page stories that I did 25 or 30 years ago. I would have thought that would seem kind of desperate and humiliating, When I have said in interviews that it doesn’t look like the American comic book industry has had an idea of its own in the past 20 or 30 years, I was just being mean. I didn’t expect the companies concerned to more or less say, “Yeah, he’s right. Let’s see if we can find another one of his stories from 30 years ago to turn into some spectacular saga.” It’s tragic. The comics that I read as a kid that inspired me were full of ideas. They didn’t need some upstart from England to come over there and tell them how to do comics. They’d got plenty of ideas of their own. But these days, I increasingly get a sense of the comics industry going through my trashcan like raccoons in the dead of the night.”

But when Mr Moore invited some friends to contribute to “Cinema Purgatorio”, we heard the midnight rattle of cans. This is a summation of those efforts:

a. A dull self-harming vampire tale, by Garth Ennis;
b. A cringeworthy post-apocalyptic Pokemon-Go, by Kieron Gillen;
c. A Civil War epic by Max Brooks (by far the best story in the compendium);
d. A cliched kaiju tale by Christos Gage – essentially a thinly-veiled comic book version of the motion picture “Pacific Rim” sans the giant robots, and with the absence of a suspenseful build-up to the appearance of the monster.

Mr Moore seems to have washed his hands of editorial direction in the title. And as for Mr Moore’s story, it is kind to say that Mr Moore’s substantive contribution to the first issue was creatively lean. It consists of a psychotic version of “Keystone Kops”, zaniness sliding into craziness, punctuated by the murmurings of a dreamer protesting against its wrongness.

In his announcement of retirement, made during the launch of his book, “Jerusalem”, Mr Moore made the following observations:

“I think I have done enough for comics. I’ve done all that I can. I think if I were to continue to work in comics, inevitably the ideas would suffer, inevitably you’d start to see me retread old ground and I think both you and I probably deserve something better than that… The superhero movies – characters that were invented by Jack Kirby in the 1960s or earlier – I have great love for those characters as they were to me when I was a 13-year-old boy. They were brilliantly designed and created characters. But they were for 50 years ago. I think this century needs, deserves, its own culture. It deserves artists that are actually going to attempt to say things that are relevant to the times we are actually living in. That’s a longwinded way of me saying I am really, really sick of Batman.”

There is no denying that being a jockey for the “Batman” franchise might be mind-numbing. The never-ending fisticuffs by an almost omnipotent super-detective might be its own wasteland. But “Cinema Purgatorio” shows little promise of originality, either.

Mr Moore has a body of work within the American comic book genre (which, not ironically, includes the brilliant Batman story, “The Killing Joke”) has no peer save perhaps for Frank Miller. But now Mr Moore seems to have been sitting in a state of powerlessness, of disconnectedness, his own Purgatorio, in respect of his creative output in the comic book format. He is in transition from one genre to the other, leaving his previous existence as one of the world’s most accomplished comic book writers behind. Psychopathic “Keystone Kops” is no capstone to a paramount career. But neither is Mr Miller’s “Dark Knight Returns III” (which we have so far reviewed twice), a Batman epic entirely lacking in the raw firepower of Mr Miller’s “Dark Knight Returns” of 1987. Mr Miller does not seem to know when to call it a day. Mr Moore does. We most sincerely thank Mr Moore for his almost unparalleled contribution to the genre, and we wish him all the very best.