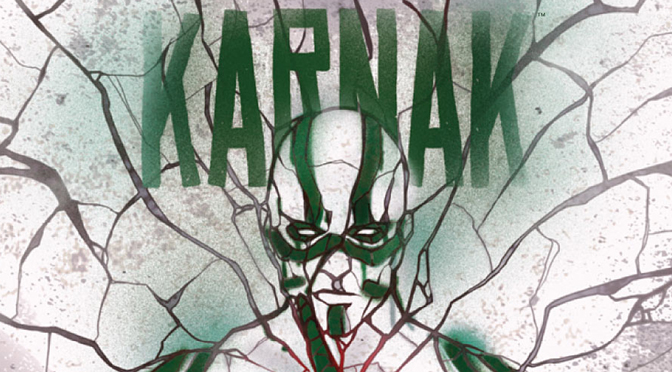 Acclaimed British comic book writer (and occasional novelist) Warren Ellis has a knack for writing droll curmudgeons. These characters are usually male (but not always), socially ill-adjusted, confrontational to the point of being violent, and clever. When Mr Ellis writes comic books featuring teams of characters, often multiple members of the cast exhibit these traits.

Mr Ellis is most commercially successful when he writes superhero comics. There is some irony to this as Mr Ellis has for many, many years expressed his dislike of the genre. A contemporary of Mr Ellis, comics writer Grant Morrison, has lamented the distaste Mr Ellis exhibits for the subject matter with the annotation that Mr Ellis is the paramount writer in that field. That is high praise from Mr Morrison, who is no slouch when it comes to raw creativity. But perhaps it is more accurate to say that Mr Ellis simply has a winning formula.

Mr Ellis is presently writing a new series called “Karnak” for Marvel Comics. This is an obscure character from a super-powered group called The Inhumans. This package of characters was created in 1965, and is slated to appear in a film in 2019. Marvel Comics have publicly stated that Mr Ellis was engaged to write the series given his track record in revitalising other Marvel Comics assets. It is a natural assumption that the work Mr Ellis does here is likely to shape the character in preparation for the motion picture. In that regard, Mr Ellis does two jobs: write the comic, and engage in pre-production character treatment specifically relating to the motion picture.

Mr Ellis has turned to his usual bag of tricks. First, he has removed the costume from the character (a good thing: the costume would not have been misplaced on a Seaworld-themed striptease performer). Mr Ellis has rarely called upon the archetypical costume conventions of the superhero genre: capes and masks are reserved for his parodies only.

Second, Mr Ellis has injected his standard mix of sardonic humour and mysticism (Karnak departs from his home, an isolated tower, urging his followers to consider the timelessness of the stones, the ephemeral nature of human life, and to “clean the latrines”). Mr Ellis does this laconic juxtaposition often and with finesse.

Third, Mr Ellis has his characters quicker, more observant, and more knowledgeable than the supporting cast. In this Mr Ellis takes a page from Arthur Conan Doyle’s Sherlock Holmes – everyone plays the role of Dr Watson. Infallibility can be a little tiresome in any text, but usually Mr Ellis makes this work well.

Fourth, Mr Ellis has made his protagonist both callous and violent. The violence Mr Ellis has his characters indulge in is usually gruesome and torturous. In the underacclaimed and brilliant “Desolation Jones” (Wildstorm Comics, 2005), the title character kills an antagonist by poking a finger through an eyeball and piercing his brain. In the highly acclaimed “Planetary” (DC Comics, 1998-2009) the main character tortures a captured and bound supervillain by forcing needles into his eyes. In “Jack Cross” (DC Comics, 2005), the title character shoots a captured terrorist in the knee in order to extract information. In “Black Summer” (Avatar Press, 2007) a protagonist spits alcohol into the face of a looming goon, sets fire to it, and glasses the bad guy in the groin. In “Red” (Wildstorm Comics, 2003) the protagonist kills his enemy’s wife and children in order to make a point. In “Iron Man: Extremis” (Marvel Comics, 2008) the title character (albeit very reluctantly) blows off the head of an adversary at point blank range.

Superhero violence is ordinarily highly ritualised and clinical. It typically depicts an exchange of punches or kicks, or blasts of energy, leading to unconsciousness without lasting trauma. If there is any blood, it is usually trickling heroically from a character’s split lip. Mr Ellis eschews this fantastical, harmless convention: his protagonists often have little hesitation in engaging in very brutal violence if it suits the character’s purpose.

“Karnak” is no different. The title character causes a captured soldier’s knee to shard and rupture, for the purpose of extracting information. It underscores the title character’s nihilistic lack of respect for human life.

Mr Ellis clearly walks a well-trodden path when writing these sorts of characters. But it never gets tired. This series should unfold in Mr Ellis’ formulaic, but brutal and entertaining, manner of story-telling.