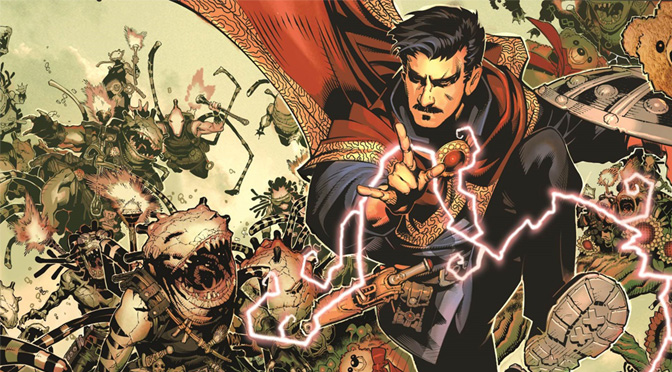 Many years ago, The Comics Journal published a critique of Marv Wolfman’s work on Adventures of Superman. The critique noted that Wolfman’s characterisation of Superman was off-kilter: Superman was prone to bursts of anger and was an easily manipulated pawn of the evil Vandal Savage. It would be as odd, noted the reviewer, as Doctor Strange being portrayed as street-wise and jive-talking.

In this iteration of the title, Doctor Strange still has his original 1950s moustache but otherwise has been “transmogrified” (Doctor Strange’s term) from a stodgy, slightly inaccessible character into the vehicle for a fun read. One night argue that this character transition has been happening for some time (notably as a foil to Deadpool’s zaniness), but this version has gone beyond “droll” to “quirky”. The initial battle with the “monastic tribe of ultra-dimensional soul-eaters” leads to the title character:

a. Sneakily determining by spell that the chief monster (a combination of snake, octopus and supermodel) is attracted to him;
b. Defeating the soul-eater champion and making out with the chief monster;
c. Causing disconsternation to his patient’s parents (“Was he just making… kissing sounds?”)
d. Being mocked by his peers, a clique of wizards who meet in a door-less bar, for his romantic interlude with a monster (The Scarlet Witch calls Doctor Strange a “dog”).

It would be difficult not to thoroughly enjoy Doctor Strange #1. Quite antithetically to traditional Doctor Strange fare, some of which features as a backdrop to the first page, the story rarely takes itself seriously. And when it does, it does it very well: asked by grateful parents as to the cost of his successful exorcism of a child, Doctor Strange replies, “Your neighbour is despondent. I can feel the heat waves of his aura reverberating through the walls. He has a birthday coming up and dreads the thought of spending it alone. Bake him a cake and buy him a goldfish and consider your debt paid.” Doctor Strange has just overcome mortal peril but is concerned about the depression of an off-panel character. This piece of dialogue, alone, paints Doctor Strange, surrounded by the weird and inhuman, as entirely grounded, human, and likeable. Mr Aaron, the writer, closes the circle on this episode with admirable skill.

Doctor Strange is not jive-talking, but this new iteration is street-wise. The character lives in Bleecker Street in Greenwich Village in New York where he has always been, but seems to have become a little trendy so suit his locale. The character’s cape transitions into a stylish scarf. The grey at the temples has been washed out. Doctor Strange does not look strange at all: you would pass the character in the street without noticing anything untoward. It is refreshing.

The stroll through Manhattan however is from Doctor Strange’s perspective. He seems what we cannot: a kaleidoscope of parasites, worms, leeches, ghoulish fauna, and weird beasts infesting the crowd on the street in, for the most part, a quite ordinary way. The lurid colours and the slimy threats, the looming monsters and the arcane spells are reminscent of Marty Pasko’s run on Doctor Fate as a backstory for The Flash in 1984 (and collected as a singular work entitled “The Immortal Doctor Fate” by DC Comics). But Doctor Strange does what Doctor Fate would never do: he botches a spell. “By the Vapors of Valtorr and the Icy Tendrills of Ikthalon, by the Power of the Ten Moons of Munnapor… Twelve! Twelve moons!”

Mr Aaron weaves an enchanting and captivating spell. This is probably the best first issue we have seen from Marvel Comics this year.

No Magic: Dr Strange and the Sorcerers Supreme #1