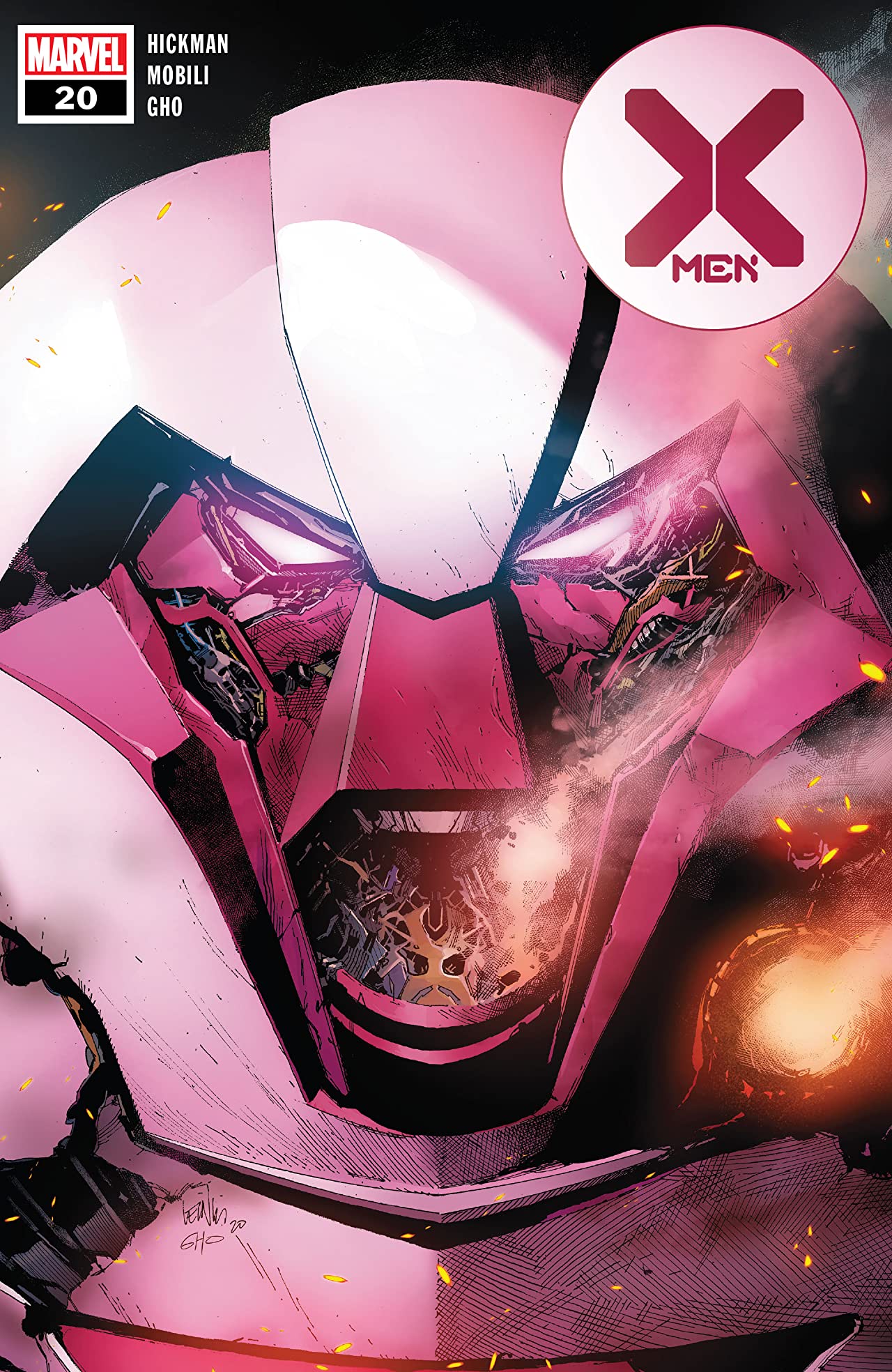 This very recent issue of X-Men, a comic about mutant superheroes from American publisher Marvel Comics, adds a level of danger and desperation not seen in the title for some time. Writer Jonathan Hickman and artist Francesco Mobili have been on various tangents since setting the stage for the future of humanity, mutants and sentient robots in the House of X / Powers of X titles. That future has been repeatedly lived by Moira X, a mutant who is repeatedly reincarnated and repeatedly has failed to stem the tide of the robot revolution.

One of the key milestones in the farewell to meatware on the planet is the development of the mutant hunting robot Nimrod. We have talked about Nimrod in our review of House of X / Powers of X back in October 2019 – see https://www.worldcomicbookreview.com/2019/10/02/powers-of-x-1-3-and-house-of-x-1-4-review-a-tale-of-civilisational-evolution/ . In this issue, Nimrod finally manifests.

Nimrod’s creation is not something the leaders of mutantkind, harboured on the island of Krakoa, can tolerate. Two of Krakoa’s leaders, the telepathic Professor Charles Xavier, and Magneto, the ultimate wielder of magnetism, deploy the shapeshifting mutant Mystique to deal with the threat. Mystique is not a mutant to be messed with. Of ambiguous morality and almost entirely self-interested, Mystique is perhaps the X-Men ensemble’s most interesting characters. She is a formidable fighter and as a shapeshifter is a master of infiltration. Mystique started her existence in 1978 as the cold leader of the descriptively named Brotherhood of Evil Mutants. Over the years she has become a sexual partner of the popular mutant fighter Wolverine, Professor Xavier, the bloodthirsty villain Sabretooth, and others. The cold personality has over the decades been transformed into something layered, but wilder. Mystique has, it is fair to say, a cult following amongst the X-Men‘s readership.

Mystique cuts a deal with Professor Xavier and Magneto. She will destroy the orbital platform named Orchis which is the birthplace and home of Nimrod, in exchange for the resurrection of Mystique’s wife, a mutant named Destiny. To that end, Mystique visits another X-man called Forge.

Forge is another morally ambiguous character from 1984. Like a true 1990s superhero, Forge has a cyborg arm and wears a belt with pouches. Created originally as a foil and love interest to another mutant, Storm, Forge is the X-Men’s armourer. Forge has on occasion veered into madness and been presented as a villain, but here, is content to hang about on Krakoa and build weapons.

Mystique commissions Forge to build an anti-matter grenade. Nonchalantly, Forge asks for a few weeks to create the device. This is the first time your reviewer can recall an extended, philosophically-driven interaction between Mystique and Forge, and with the benefit of hindsight it seems well-overdue. The interaction between the two, one refusing to accept responsibility how his creations are used by those who wield them (the classic moral stance of an arms manufacturer), and the other seemingly having never thought about the consequences of her actions (a mercenary who thinks the ends justify the means), is intriguing.

Mr Hickman injects his trademark philosophical musings by the characters at several points in this issue. These monologues are always thoughtful, and occur so often we wonder how Mr Hickman stops them from becoming stale. Mr Hickman, it is fair to say, overused this technique of the spoken insight in his otherwise excellent comic East of West (from Image Comics – see for example https://www.worldcomicbookreview.com/2016/08/11/east-west-26-review/ . The insights have become tighter in this title, and more serrated. Here we have the creators of Nimrod trying to understand why mutants desire their destruction:

These panels are quite beautiful in their depiction of advanced technology. One of artist Francesco Mobili’s many skills is to convey the grandeur of the subject matter, and especially when it comes to how the void of space is tamed by machines. The art of the machines – structured, symmetrical – is starkly contrasted by Mr Mobili with the inherently organic nature of Krakoa.

Mystique’s mission is a failure. Given Nimrod was depicted in House of X / Powers of X as capable of dispatching a very powerful mutant like Apocalypse, perhaps this was inevitable.

Magneto and Professor Xavier are unforgiving. Much has been ventilated on online forums, such as ours, about Charles Xavier’s personality’s transformation from benign father-figure to the shrewd chess player. Xavier not revealed his face since his physical appearance was re-drafted by Mr Hickman and Mr Mobili into that of a man in a black bodysuit topped with an alien-esque helmet. (Sometimes it is difficult to discern who are the heroes and who are the villains in this title, and indeed, it is better for it. the plot is about competing visions of evolution, not altruism.)

Is this indeed Xavier? Or could it be Xavier controlled by Nimrod’s creators by the helmet, in such a way as to ensure the X-Men’s losing streak in their ongoing battle with Orchis?

Magneto and Xavier are stone cold, refusing to honour their promise to Mystique to return Destiny from the dead. The final page foreshadows “Inferno”, perhaps a return to the vast storyline from 1989 in which demons invade New York City. Demons involve magic, and perhaps the only way in which the artificial machine intelligences plotting the inevitable downfall of humans and mutants can be stopped is by the intervention of sorcery. Mr Hickman picks up pace with this excellent issue, and so we suggest that the answers are a mere sprint around the corner.