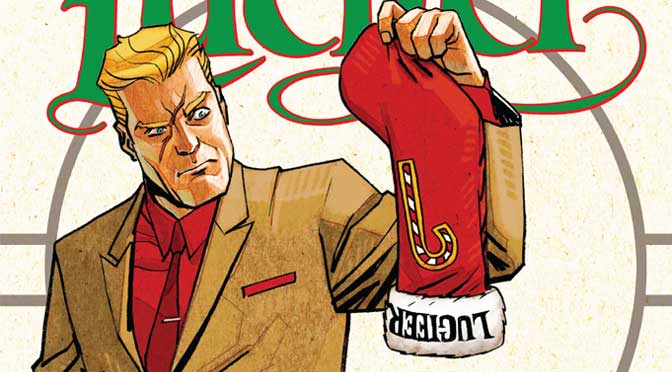 We reviewed the 1st issue of DC Comics’ 2016 relaunch of the Lucifer comic book series a year ago. In that first review of the first issue, we were of the opinion that the relaunch itself is inherently problematic by virtue of bringing back Lucifer (in so far as the character’s story was already told and wrapped up neatly in the pages of Mike Carey’s 2000-2006 series, leaving very little room for a new story, much less one that carries similar overtones). But we found no fault in the quality of the writing itself. New writer Holly Black’s Lucifer was consistent with Mike Carey’s Lucifer: the plotting in Ms Black’s renaissance of publisher Vertigo Comics’ most intriguing character – the Devil, as imagined in John Donne’s “Paradise Lost” (1667) but engaging in machinations both quiet and loud in contemporary times – is both solid and interesting.

Lucifer #13, on the other hand, is neither. This is a holiday issue consisting of two standalone yarns. The first is called “KrampusNacht,” a story that introduces a holiday in Los Angeles called “Krampuslauf,” where people roam the streets wearing Krampus masks and costumes. To the uninitiated, Krampus is a half-goat, half-demon figure from medieval folklore that comes out during the Christmas season and punishes naughty children. Festivals associated with Krampus still occur in Central Europe and northern Italy.

Despite being used in the title, the Krampus mythology does not feature heavily in the story. Two bored young men decide to rob a pawnshop using Krampus masks to hide their face. Unfortunately, one of the items they took is a briefcase containing a precious coin. This was the coin cursed by the demon Saul in the pages of the original series. (Saul is a thing called a “Jin En Mok”, a creature that has existed before creation and had no form, instead unpleasantly borrowing the shape of other creatures that it has eaten.)

The operational parameters of the curse provides that the coin “hurts to look at” and provides both intense pain and pleasure. The coin compels people to look at it, with both the pleasure and pain increasing incrementally until the person dies.

“KrampusNacht” manifests a drop in quality from Ms Black. The story itself is uneventful, and its connections to the Lucifer concept are at best fleeting. The use of plot elements from the original series may add texture, but appreciation will be exclusive to readers familiar with the original series. It does nothing for new readers or those who have forgotten the somewhat minor antagonist Saul and his use of the coin in a very ancillary and petty cursing of a cafe waiter.

The second story, written by Richard Kadrey, is entitled “Secret Santa”. It features Lucifer and his employees at his piano bar, Ex Lux, celebrating the holidays. The Kris Kringle festivities are sabotaged by a couple of unnamed demons with a gift that summons a monster. Help comes by way of a gift sent to Lucifer by Rachel Begai.

Rachel Begai is another character that will be familiar to readers of the original series, a native American girl who Lucifer manipulated into killing a pantheon of prehistoric and nameless wish-granting gods.

But “Secret Santa” is more of the same – a non-event referencing plots and characters from the original series. This wobbly nod to the past glories of the original series is worse than that in the first story, because Rachel’s gift comes off as just an amateurish convenient plot device. And further, it is an unnecessary one at that given that nothing about the monster indicates that it could have posed any serious threat with both Lucifer and the demon and Lucifer adherent Mazikeen present.

What is worse is the characterization of Lucifer. Mr Kadrey has written a jovial Lucifer that is markedly removed from Mr Carey’s and Ms Black’s portrait of the embodiment of ruthless Will (noting that Ms Black has taken mis-steps: in the first issue, Lucifer describes to a bored bartender his time in a nebula with the awe of a first-time tourist in New York. For a being which lit the stars on God’s command, this was odd).

It is a sketch done poorly in crayon. We see Mr Kadrey’s Lucifer show concern over his employees, participate in a $25 kris kringle, punish a potential date rapist, and use highly uncharacteristic verbiage (“golly” and “ho ho ho”). This from the character who, burned to ashes by aggregated foes and with his consciousness trapped in limbo, angrily threatened Death in issue 26 of the first series?

Lucifer: I intend to survive this. Anything you say ought to take that into account.
Death: You know, I told my brother once, that if you kill the messenger, in the long run, you just get less mail.

Behind the winsome riposte, Death took the threat seriously enough to not carry out her task of collecting Lucifer. In this issue, “golly” is a clanger.

We think that if Vertigo Comics wishes to invoke the plot elements of the 2000 original series then it should remain true to the 2000 (or is it 1667?) characterisation. Lucifer #13 is divorced from the fine-milled writing that Ms Black has otherwise brought to bear for the 2016 relaunch. These stories are standalone and do not contain any major plot elements related to the main story arc. Given the abrupt implosion of quality, missing this issue leaves nothing lost.