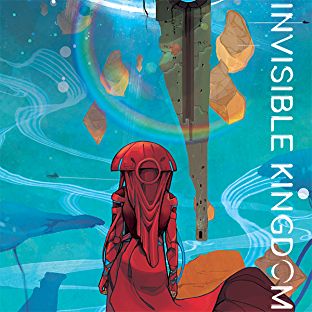 Invisible Kingdom is a science fiction epic set nowhere near Earth, involving humanoid aliens. Looking back through our various reviews over the past four years of our site’s existence, we cannot find an example of a review where we applaud the colourist. That changes with this critique. Digital technician Adam Pruett does a literally incandescent job of rendering the art in this comic more than vivid: it is positively lurid, a combination of bizarre neon flares and shadowy depths which add strangeness and beauty to the worlds created by writer G. Willow Wilson and artist Christian Ward.

The plot follows two quite different characters: Grix, who is the capable and quick thinking captain of a small merchant vessel called the Sundog, and Vess, who is a newly anointed “none” in a church called the Monastery of the Siblings of Severity. The word “none” is an entendre. In entering the Monastery, the acolyte adopts a Franciscan Christian or Sufi Muslim ascetic of the foregoing of material possessions – the Renunciation.

The road to the Monastery of the Siblings of Severity as the name suggests is long and hard: those aspiring to the church must come from light years away, barefoot and blindfolded, abjuring food. And the person who enters the church becomes the equivalent of a nun – one of The Professed. The nones all seem to be female, although is described as being of an entirely alien gender.

Vess is an admirable sort. Though she discovers that the Renunciation is corrupt, she does not see that as reason to discard her vestments and give up her faith. As all religions should be, the concept is bigger than the institution. But as with too many religions, The Renunciation has a (male) militant wing – the Hammer of the Path – who chase Vess down when she escapes.

Vess is in marked contrast to Grix who is, essentially, part of a highly regulated logistics chain of the powerful corporation, Lux. There is strong social commentary in the book about consumer obsession. Readers will recognise in Lux the commercial promise of Amazon and its ilk in delivering packages of consumer goods upon demand and payment.

Invisible Kingdom this takes place on an interplanetary scale. The workers in Lux’s logistics chain struggle under the pace and conditions of their work. They are locked into oppressive contracts through an imbalance of negotiating power, and are watched over by a Lux minion who, at least initially, seems akin to Soviet political naval officers of the 1980s.

Writer G. Willow Wilson bridges the parallel stories with dialogue boxes that carry the themes of one plot into the other, weaving them backwards and forwards. This is hardly a novel technique, but it is done here with finesse. As the threads of the two plots start to narrow, that interweaving activity accelerates. Finally, by the conclusion of the first chapter of the first volume, there is barely any daylight between them. The art, by Christian Ward, applies the same direction through echoes of the two major character’s poses. There is a pacing, poco a poco, to the story we very much envy. At the conclusion of this volume, the inversed mirrors of asceticism and consumerism blur as we discover the church and Lux may be one and the same.

As the volume progresses, we encounter more players: the furious Hammer of the Path captain, the amusingly facile captain of the Lux warship with his designer-branded helmet, and the wavering bureaucrat Marq. We also have additional social commentary, this time on the state of contemporary affairs: “People don’t want the truth. They only want information that supports what they think they know already.” It is a sobering insight.

1. The apparently all-female church, an influential sect fueled by proselytism and a sense of superiority, and with a Mother Superior, will remind Mr Herbert’s adherents of the Bene Gesserit. Vess is akin to Dune’s Lady Jessica Atriedes, both wayward acolytes.

2. As for Lux, it seems to us that, save for absence of trading in Arrakis spice, that this could be the Dune universe’s trading corporation CHOAM, whose flag changes direction with the winds of money.

3. Are the aliens In Invisible Kingdom truly alien? The characters, aside from odd skin tones, do not seem very alien at all – they have very human motivations. Dune is set tens of thousands of years in the future, and yet over that time, society has changed but people are just as horrible, petty, and human as ever.

4. Dune has an exordium at the beginning of every chapter, quoting faux- historical or philosophical texts, in a clever world-building exercise. Invisible Kingdom adopts a similar tactic, where the action is overlaid by scriptures from the Renunciation’s code. Even as the Renunciation is hollowed out, the texts hold truths. Both the late Mr Herbert and Ms Wilson are aware that influential texts can be pervasive, last thousands of years, and underpin societies. Ms Wilson’s wisdoms are, helpfully, less delphic than those of Mr Herbert.

(This comparison is hardly a criticism: the original Dune novels are revered and brilliant. If the talented Ms Wilson inadvertently provides readers of Dune with what could be interpreted as, finally, an excellent sequel, then who can complain? And indeed, in a postscript, Ms Wilson acknowledges her debt to Dune.)

This title has strong characterisation, fantastically strange artwork, striking colouring, and an intriguing plot. As such, it is not surprising that the title is published by the eminent Karen Berger of Berger Books (an imprint of Dark Horse Comics).