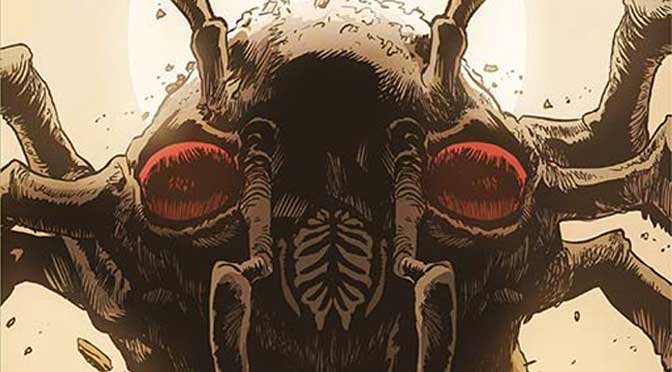 “Centipede” #1 is the start of a new comic book mini-series created in partnership between American comic book publisher Dynamite Entertainment and American software developer Atari, Inc. The comic is based on the fixed shooter arcade game of the same title, released in 1980 by Atari for a wide variety of video game platforms. The game, as is common of video games of the time, had no actual story. It put players in the role of an elf (sometimes depicted as a garden gnome) who, in an activity best described as “combat gardening”, fires laser shots at a giant digital centipede roaming a field of mushrooms. For a game centred solely around pest control, it was surprisingly popular. (For those now in a nostalgic mood to play “Centiepede”, here is a free online version).

The “Centipede” comic provides a more substantial and drastically altered backstory to the game. The story is told through the perspective of a man named “Dale Trell,” of the planet STY-REK. This planet was populated by beings that look similar to Earth’s humans, but possess more advanced technology. That technology, according to Trell, was mostly inspired by stories and broadcasts that they have gathered while listening in on other planets. Earth is said to be one of their favorite planets for media content.

The comic starts with Trell as the last surviving natural inhabitant of STY-REK. The planet has been attacked by a giant, genocidal centipede. Most of the pages are devoted to Trell breaking the fourth wall and talking directly to the reader. The explanation is that in order to stay sane, the survivor relies on conversing with an imaginary friend, cleverly serving as a proxy for the reader. The first issue tries to set up the plot through Trell’s dialogue, as he retells his backstory. Trell finally decides to go out and take his revenge on the creature. The issue ends on a cliffhanger as he comes face to face with his nemesis.

We at WCBR have reviewed several of writer Max Bemis’ works (“Foolkiller”, and the “Worst X-Man Ever”). We have praised Mr Bemis’ ability to seamlessly blend humor and morbid themes, while still crafting an engaging plot. “Centipede” #1 must be an off-day for Mr Bemis. The comic is neither engaging nor funny, and the dark subject matter of planetary-wide destruction at the hands of a giant monster is, remarkably, delivered in a way which is uninteresting at best.

One of the key problems is the decision to set the plot in an alien planet that is lifeless at the start of the story. The flashbacks are not effective at making a reader care about the planet and its deceased population. This is especially true as they are presented from the perspective of the socially-inept protagonist, who is as much of an outsider as the reader. Editorial direction might have corrected this, by introducing the aliens to the reader before their deaths, so as to elicit an emotional response from the reader. A post-apocalyptic introduction misses the mark.

Another problem is that Trell, as far as protagonists go, is unlikable, unrelatable, and frankly boring. Mr Bemis is no stranger to unlikable protagonists, but in the case of “Foolkiller” and “Worst X-Man Ever”, the presence of ancillary characters allowed the author to flesh out the protagonists and craft interesting situations. Readers may not like the protagonist, but they are invested in how the scenes play out. That’s not the case in “Centipede”. The one-man show that is Trell struggles to hold attention. And without any effective foil outside of the silent reader proxy, any attempt at humor also fails.

While we should not be expecting much story potential from a 12-kilobyte arcade shooting game from the 1980s, we have seen enough from Mr Bemis’ past works to know that he has the talent and skill needed to craft something substantial out of the franchise. However, nothing in this first issue so far inspires confidence. The story feels like Mr Bemis just needs to pay the bills. We think that it is no coincidence that this comic is published months after the release of the Atari Centipede board game.