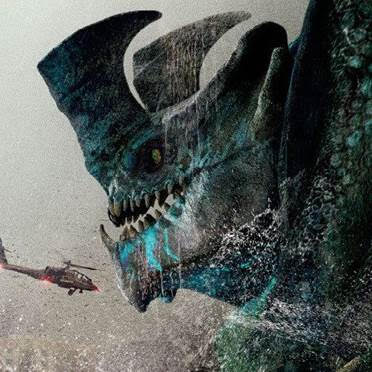 The motion picture “Pacific Rim” (2013) (see the image introducing this article) featured kaiju fighting giant robots piloted by humans. “Pacific Rim” is described as director Guillermo del Toro’s “180-million love letter to the kaiju movies he loved growing up”. The cult success of the movie within the United States has been attributed to its novelty, at least within the United States, of giant robots fighting giant monsters. This newfound obsession in American pop culture aficionados seems to have inspired the large American superhero comic book publisher, Marvel Comics, to buy into the trend with the recent released of “Monsters Unleashed”, which we have previously reviewed.

But kaiju have been appearing in Western comic books for decades. Not all of them resemble enormous dinosaurs, but then, in the Japanese shonen manga tradition, not all kaiju resemble giant dinosaurs either. Here are our top eleven (originally ten, but with the late inclusion of Nemesis) examples of the most fearsome giant monsters in both manga, and also Western comic books.

Godzilla is the most iconic of all pop culture monsters, and the character’s omission from the beginning of any list of this nature would be an unforgivable oversight.

As eloquently put by Mark Jacobsen in Vulture.com:

“Godzilla transcends humanist prattle. Very few constructs have so perfectly embodied the overriding fears of a particular era. He is the symbol of a world gone wrong, a work of man that once created cannot be taken back or deleted. He rears up out of the sea as a creature of no particular belief system, apart from even the most elastic version of evolution and taxonomy, a reptilian id that lives inside the deepest recesses of the collective unconscious that cannot be reasoned with, a merciless undertaker who broaches no deals. He arrives alone, the ultimate gunslinger, with a free will all his own, the greenest thing ever seen…

“The idea of Godzilla as exclusively an Atom Age metaphor would have been premature in the Japan of the early 1950s. It was less than a decade after the war. The Japanese eugenic project, aimed at establishing a ruthless hegemony of superiors over the nonentities to the West, had failed. The emperor was deposed, stripped of divine status. The homeland islands were occupied by a massive, doughy race of loud-mouthed, baseball-loving lugs that propriety demanded be treated as rightful victors. Still, this time of national guilt and humiliation produced some of the greatest movies ever made in Japan, or anywhere, films like Kurosawa’s Stray Dog and Ikuru. Honda’s first Godzilla, featuring Takashi Shimura as a fearful archeologist (a Kurosawa favorite, he’d play the lead in the sublime I Live in Fear), is in line with these inwardly turned post-war films and perhaps the most brutally unforgiving of them. Shame-ridden self-flagellation was in order, and who better to supply the rubber-suited psychic punishment than the Rorschach-shaped big fella himself?”

There has been much written about how Godzilla represents nuclear weapons. Indeed, in the original 1954 film, Godzilla was awoken by bomb tests in the Pacific Ocean. And like nuclear energy, the monster is, in circumstances, strangely and inhumanly benign.

Whether Godzilla was a representation of divine punishment or self-flagellation for Japan’s wartime behaviour and conquests is a different issue. American air raids, coordinated by the notorious American air force general Curtis Le May, napalmed great swathes of Japanese cities, especially Tokyo, where the intensity of heat led to civilians seeking refuge in rivers being boiled to death. Immediately after the war, Japan was beset by widespread famine as well as American occupation. Japanese culture was shaken by the famous photograph of a casually dressed General Douglas MacArthur standing next to the diminutive Emperor Hirohito, at a time where Hirohito was akitsumikami (a manifest deity), and Japanese citizens were taught to avert their eyes from veiled portraits of the Emperor. Communism was on the rise and the Americans were keen to silence Communist propaganda and stifle Communist agitation in case Japan became aligned with the Soviet Union. Godzilla was instead perhaps a representation of the ongoing seismic and crushing changes occurring in post-war Japan.

Godzilla is most famous for the innumerable motions pictures. In addition, “Godzilla, King of the Monsters” was published by Kodansaya Comics in 1992.

Godzilla’s foes tend to also be kaiju. By way of colour and movement to our topic, here is a size chart by well-known American comic book artist Art Adams, drawn in or around 1992.

Perhaps a surprise inclusion given the character is an enormous alien dragon from the planet Kakaranathara, which wears purple pants, Fin Fang Foom has most regularly been an opponent to Marvel Comics’ god of thunder, Thor, and the superhero Iron Man. Fing Fang Foom is a property of American publisher Marvel Comics, with a first appearance in Strange Tales #89, 1961.

But it was in the parody title “Nextwave: Agents of H.A.T.E” (Marvel Comics, 2006) that the murderous menace of Fin Fang Foom was revealed: a penchant for human meat. This was a consequence of humans filling themselves with MSG, sugars and fats. As writer Warren Ellis put it, humans are junk food for monsters.

There is, curiously, a Fin Fang Foom Appreciation Club thread, with one lonely person contributing images and enthusiasm, at the Comic Book Resources message boards!

In the Japanese manga classic “One Piece” (chapter 802, Episode 751) (which we have previously reviewed), a giant, thousand year old elephant called Zunisha is so large as to be a habitat for an island full of animals and people sitting on its back. Zunisha has a symbiotic relationship with a group called the Mink Tribe.

This alien creature is a perennial foe of American publisher DC Comics’ paramount superhero team, the Justice League. The creature’s first appearance was in Brave and The Bold #28, 1960. Starro is usually represented as an enormous one-eyed starfish. The creature communicates through telepathy. It is capable of spawning enormous numbers of hand-sized starfish, which can attach themselves to a person’s face and take control of their body.

Starro was created long before the facehugger in the “Alien” movie franchise, and despite the 1960 Silver Age pedigree conveys a contemporary creepiness reminiscent of Robert Heinlein’s 1951 novel, “The Puppet Masters”. By 1988, the character had creatively evolved so that its parent, the “Star Conqueror”, was so large as to envelope Europe, and which, horribly, enslaved humans while they slept.

“Neon Genesis Evangelion” was a long running manga, first published in Japan in “Shōnen Ace” in December 1994 and concluding in June 2013. The cult classic anime was based upon the manga.

Neon Genesis Evangelion involved giant robots being deployed to fight “Angels”, giant beasts (sometimes in strange geometric forms rather than as traditional monsters) which periodically rise from the depths to destroy cities (uncannily like “Pacific Rim”). Angels have names which would easily be mistaken for characters from the Old Testament Bible. Depicted above is the eery-looking “Sachiel”. Below, from left to right, are:

a. Gaghiel, being killed by the giant robot Evangelion Unit-02 while standing on the deck of an aircraft carrier;
b. Shamshel in combat,
c. Ramiel, hovering over a city; and
d. Israfel.

Nemesis is a giant monster which carves a path through the American landscape, first appearing in American Gothic Press’s title “Project Nemesis”, October 2015 – June 2016. Our review on “Project Nemesis” captures the essence of this malign beast.

This enemy of Marvel Comics’ Asgardian superhero Thor, Jormungand first appears in Marvel Tales #105 (1952). Notionally, Jormungard, also called the Midgard Serpent, exists in an ethereal state wrapped around the Earth. In addition to the powerful benefits of its size, Jormungand spits fire and poison, can generate illusions and, as depicted above, is remarkably chatty for an enormous serpent. Thor has killed Jormungand twice within Marvel Comics’ continuity, but almost inevitably and in the tiresome tradition of American superhero comic book publishers, Marvel Comics’ editors manufacture the character’s return from the dead.

In 2008, the motion picture “Cloverfield” was released by Paramount Pictures. The film purports to be a cinema verite documentary of a barely seen giant monster attacking and systemically destroying New York.

The subtitle Kishin (鬼神 lit. “Demon[ic] God”?) was chosen for the manga spin-off, “Cloverfield/Kishin”, released exclusively in Japan and published by Kadokawa Shoten from January 2008-May 2008. The manga’s storyline pre-dates the movie’s storyline, and depicts the monster marauding the Tokyo coastline. A human character is emotionally linked to the monster through a convoluted plotline involving the creature’s DNA.

This monster appeared in the science fiction mecha manga series “B’t X”, written and illustrated by Masami Kurumada and published in “Shōnen Ace” in Japan from 1994 to 2000.

The plot of this series is very convoluted and instead of wrestling with it in this commentary, we instead direct you to this summation.

The B’t is a biomechanical creature, created by the fictional Machine Empire based in the Gobi Desert. Each B’t is based on a mythological beast. The ultimate B’t is called Raffaello, which threatens to devour the earth. It is eventually stopped by the one thing which can destroy the monster – a piece of the Sun – in the publication’s conclusion of the six-year saga.

God is a monstrosity which first appeared in Wildstorm Comic’s “The Authority” #9, 2000. Created by Warren Ellis, this enormous pyramidal creature is described as the original inhabitant of the Earth. After tens of millions of years elsewhere, God returns to the Earth determined to eject its present primary occupants, humans. The initial way of doing this is to cause long-dormant monsters vaguely resembling black semen to emerge from beneath the surface of the Moon. These slimy, inky creatures cross the void to the Earth and begin to attack organic life, including and especially humans, as a precursor to terraforming the planet into a ball of organic primordial waste.

The superhero team called The Authority travel into space and their fifty mile long spaceship called The Carrier enters God through what is in essence a pore. Fighting off God’s autoimmune system and avoiding confrontation with a sentient race of parasites, The Carrier reaches God’s multiple brains. The Authority’s leader Jenny Sparks uses her ability to generate electricity to electrocute God’s brains, at the cost of her own life.

What is not made clear is what happens to God’s corpse within the continuity of the story. We assume it floated in space in orbit around the sun, like an organic planetoid.

In 2012, writer Tim Daniel published “Enormous”, a graphic novel and then ongoing series released by Image Comics. In this title, humans are extinction as a consequence of being “bottom of the food chain” (to quote Mr Daniels in an interview with Comic Book Resources http://www.cbr.com/tim-daniel-hits-it-big-with-enormous/ . Giant predatory creatures called The Enormous have smashed the global population. The lead character, Ellen Grace, leads a search and rescue team trying to save children from death by monster.

Mr Daniel’s writing, and his timing having regard to the success of “Pacific Rim”, is impressive. In February 2015 it was reported that Fox and New Regency Television were developing the title into a television series.