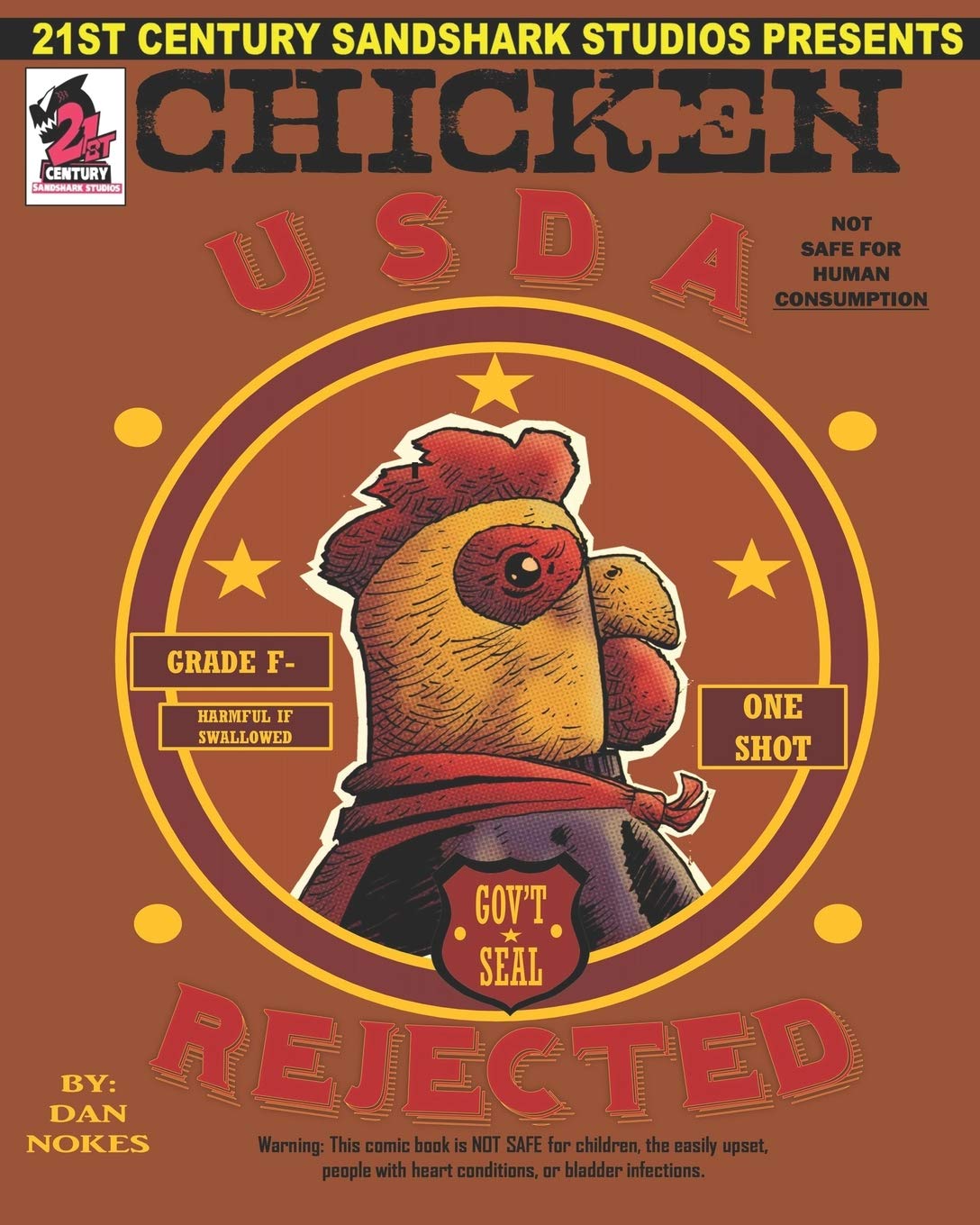 “As serious as a stick of dynamite at a Zippo convention”. This comic, with the unlikely title of Chicken USDA Rejected, created by Dan Nokes, has one of the most amusing adults-only warnings we have seen:

We laughed and laughed from beginning to end. We thought this would be silly, and it is not at all what we expected. The internal monologue is fluid, erudite, and barbed. Not too many comics begin with a high brow insult to the reading audience: “It was late into day one of a two day comic and fan show. A sad and pathetic gathering of late stage capitalism, consumer identity, and broken and sick man-children, trying to validate their own existence, through fetishising their own rose-coloured nostalgia. bunch of deluded bastards, every last one.” The target demographic of this title, we thus assume, is not the ComicsGate crowd.

(If this comic’s assessment is correct, comic book conventions seem to be exercises in existentialism of the doomed and futile variety. So much for any ambition for the World Comic Book Review to one day host a stall at Comicon. )

The story is surreal. Mr Nokes inserts himself into the comic as a “king of passionate delusionals” at a comics convention in Baltimore, and the narrator is a small and apparently toy chicken, sitting to Mr Nokes’ right. Chicken is not kind to Mr Nokes, nor to any of Chicken’s critics.

Your reviewer has a very robust sense of humour. This particular series of panels provoked snorts.

It is hard to pick and choose which of Chicken’s internal monologues triumph over others. They are almost all sensationally good. Mr Nokes continues to be battered by Chicken as the story progresses: “I felt a forced narrative flashback of exposition overwhelm me, like my mind had been taken over by some tropish hack writer.”

After dark, Chicken stops pretending to be a stuffed animal and, like some world-weary nemesis of Woody from the motion picture Toy Story, cautiously checks to see if the coast is clear and arises from his perch to pad outside through an emergency exit. The surrealism continues. As Chicken emerges from the convention centre, Mr Nokes involves the cinematic magic of The Wizard of Oz and the art shifts from monochrome to colour. Yet Baltimore is apparently no Munchkin Land. Chicken revels in the ambience of homeless drug addicts, criminals on the lam, and brazen prostitution. Chicken is met by his “spiritual advisor and tax attorney, Monsieur Larry”, who is somewhat worse for wear, a melange of Dr Gonzo (Hunter S. Thompson’s attorney in Fear and Loathing in Las Vegas) and Garth Ennis’ Preacher:

From there, Chicken is hardly moves of his own volition, nor even bawks much. He is the eye of the hurricane, the action swirling around him, with superlative comedic effect. Chicken finds himself draped with a bra while frequenting a strip bar; in a clandestine meeting with Vladimir Putin and Donald Trump (with the code names, “Shirtless Bear” and “Orange Eagle”); reuniting with the lost love of his life Lolita Le Jezzebelle; avoiding the danger of a Russian exotic dancer assassin who killed a man in Budapest “with novelty Ping Pong balls and a half-empty tube of lube”; a passenger in a sidecar motorcycle which leaps over Baltimore’s police riot squad; and is confronted by the malevolent president of the Arkansas Battered Chicken Corporation, named General Aloysius Crabtree Beauregard (no doubt a rival of Colonel Sanders and Kentucky Fried Chicken). In a fight with the evil giant chicken, Poultron, Chicken, again barely moving, summons the spirit of The Midnighter in Mark Millar’s The Authority:

Like the classic motion picture Casablanca, there are only broken hearts and a lifetime of regrets by the conclusion. But never fear, for there are also a few gratuitous dick jokes.

Mr Nokes has a sardonic wit which is less rapier and more broadsword in its arc of parodic destruction. Good comedy is very hard to write, and especially where the writer endeavours to invoke the spirit of Voltaire’s Candide. Mr Nokes achieves this with apparent effortlessness.

(PS: the metatags for the review of this comic were very hard to work out.)