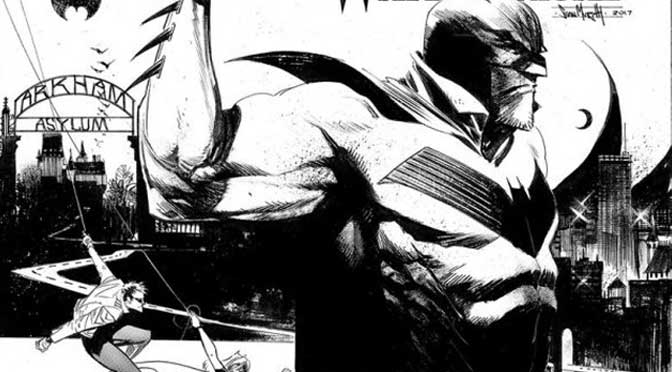 We continue our meandering excursion through the present promulgation of titles associated with alternate universe-versions of Batman. This exercise is vaguely akin to considering the pop art works of, say, an Andy Warhol, whereby each iteration of the image has different hues and focus. Batman: White Knight is one of these: a new comic book miniseries from American publisher DC Comics. It focuses on their paramount property The Batman and his nemesis, the psychopathic clown villain The Joker. The miniseries is fortunately not part of the continuity imposed by the publisher over its mainstream titles. This means the story is able to tackle subject matters that would normally run in conflict with the established Batman mythos, as well as the current ongoing Batman-focused cross-promotional event called Dark Nights: Metal.

Batman: White Knight works as a meticulously crafted inversion of the dynamics between the Batman and the Joker. The comic opens with an unexpected scene—The Joker’s alter ego Jack Napier accompanied by a police escort, visiting an incarcerated Batman and asking for his help. Many comic books, both official ones from DC and subtle thematic explorations from other publishers (notably, Mark Millar’s 2010 title Nemesis, published by Icon Comics) have already told stories in which the vigilante Batman is portrayed as the villain. But White Knight innovates upon the formula by presenting the reversal of roles organically. Barring the editorial mandate to maintain the status quo, one could easily see the events in White Knight as a natural progression of the Batman and the Joker’s stories.

Recent portrayals of the Batman have already shown the vigilante to be singularly obsessive about his crusade against criminals and, despite having a strict moral code, is still operating outside of the law. This comic highlights this conundrum of vigilantism frequently glossed over by DC Comics and its writers, travailing the consequences not just for Batman, but for his allies as well.

First, we see Batman recklessly endanger civilian lives (having Batgirl and Nightwing around to save civilians from harm is beside the point) and damage both public and private property in his pursuit of the Joker. The chase scene culminates in the Batman, in a fit of rage, forcefully shoving an entire bottle’s worth of psychoactive drugs inside The Joker’s mouth while Commissioner Gordon, a group of policemen, and the Batman’s sidekicks watch in horror.

Worse, the incident was caught on camera and the resulting footage went viral, making for a massive PR disaster for both Batman and the entire police force, and all the while earning public sympathy for the brutalised Joker.

This comic is one of the best recent portrayals of the Joker, and in more ways than one. While it does not try to glorify or justify the actions of the psychopathic mass murderer, it delves into the topic of just how much of his horrible deeds were a side-effect of his obsession with The Batman-and, in pursuance of Alan Moore’s exposition in the classic 1988 Batman story, The Killing Joke – just how much they define each other. The Joker, during their tussle, attacks Batman with a pointed fact: Gotham City is so terrified of the Joker that they are willing to look the other way when the Batman, without any degree of accountability, takes the law into his own hands. Without the Joker, Batman would be the villain in people’s eyes.

The next twist in the comic is that the medication Batman recklessly and viciously fed to the Joker resulted in the villain being “cured” of his mental illness, after waking up from a lengthy coma. During a visit by the Batman, the Joker (who now prefers to be called by his real name, Jack Napier) admits to being misguided in his hatred for Gotham City and the Batman, while also revealing the motivation behind his lengthy career as a criminal.

Furthermore, Jack Napier has shown himself to be now emotionally stable and in possession of above average IQ, using public access to the library as a means of educating himself enough to represent himself in court and actually winning. Napier then decides to sue the Gotham Police force. US criminal law has a fundamental concept on evidence called “the fruits of the poisoned tree”. That phrase describes the inadmissibility of illegally obtained evidence, and writer Sean Murphy cleverly uses the dictum here. It turns out that in all of the years that the Joker and the Batman fought each other, there really was no court-permissible evidence that would convict the Joker of anything but armed robbery. But the Batman is documented to have violated numerous laws (driving an unlicensed weaponized tank in public, assault and battery of numerous individuals, destruction of public and private property, and of course attempted murder by lethal dosage.) The Gotham City Police Department is complicit, with the GCPD’s Bat Signal being presented as evidence.

The biggest surprise is that Jack Napier seems genuinely sincere in his new crusade, wanting to get rid of perceived GCPD corruption and the Batman (for being a catalyst for many of Gotham’s ills) as a means of redeeming himself after his many deeds as the Joker. And he is doing everything by the book, using legislation and the courts instead of any murderous tactics that people would normally expect from the Joker.

We admit that we were initially not too hopeful about Batman: White Knight, no thanks to DC oversaturating the racks with Batman-related titles these past few months and the somewhat subpar comic books that came out of the Dark Nights: Metal cross promotional event. But we welcome the surprise that Batman: White Knight is an exceptional read that can be enjoyed both by traditional and cynical (or both) fans of the Batman.