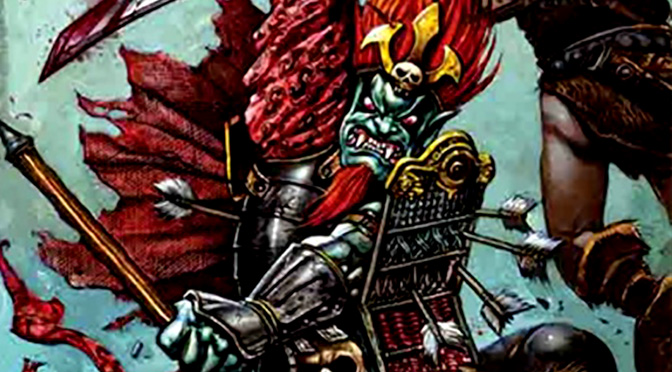 Promotional tie-ins between comics and various goods and services are commonplace. Most usually these tie-ins are linked to toys or movies. Some of these have been exceptionally successful, for example, “Transformers”.

“Alpha King” is an unabashed promotional tie-in. The goods promoted by the comic, however, are novel: a microbrewery called 3 Floyds Brewing Company uses the comic to promote the brewer’s pale ale in the context of an interdimensional war involving sword-wielding demons. This is as ridiculous as it sounds. The plot begins with an amusing-enough gag: some soldiers in an army of ogres discuss Tolkein, before being rallied to a siege. The story then jumps to a bearded brewer in modern day America, who encourages kids to slip around the corner of the vat and sneak in consumption of the beer.

Moral or legal issues concerning the encouragement of minors to drink alcohol aside, it is a jarring change of pace from a pending siege by monsters to a quiet day making beer. And then it is followed by another shuddering plot twist: the brewer is confronted by three monsters who, after beating up the brewer and threatening to rape his girlfriend, is dumped in the beer vat. Arising from his imprisonment in the vat, the brewer, mottled and bleached is considered to be a god- anointed warlord and decides to rescue his girlfriend.

It has shades of the English comic book medium’s enthusiasm for bloody gallows humour best seen in 2000AD’s publications (no doubt Simon Bisley’s influence): even the front cover depicts a decapitation, a head bloodily spinning through the hair with an unsubtle aerial blood trail. Very disappointingly, American writer Brian Azzarello’s very witty banter is entirely missing from this story. Instead, we are treated to clichés and It is a terribly executed extended advertisement, dressed up in blood and gore.

“We raze a fortress. We burn a king. We taste revenge.” This is very far from the nuanced realism of Mr Azzarello’s work on “100 Bullets (Vertigo Comics):

For Image Comics, a publishing company which has done so well as an enduring home for high quality work over the past few years, this is a dreadful slip-up in their titles approval process.