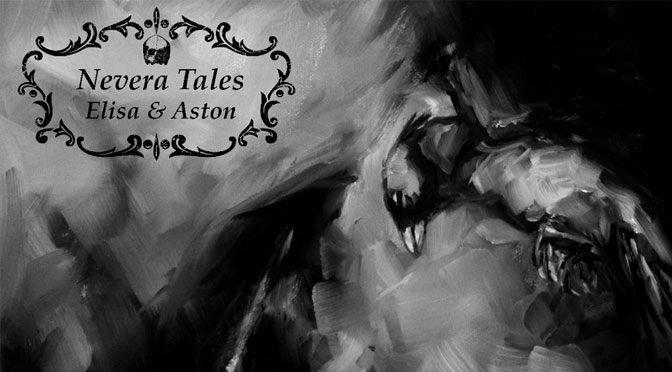 “If you live long enough, you will know that it is pointless to ask mortals what they want, the answer will always be shallow and inauthentic. Simply listen to the music in their voice, where their eyes wander, and where they keep their eyes from wandering.”

This extract from “Nevera Tales: Elisa and Aston” is indicative of the quality of writer Daniel Bishop’s skills. This comic is set out as a series of panels mirroring a monologue of a captive vampire named Aston. Aston rots in a mine. The manner of his capture isn’t clear, but we see him cast into the abyss, his face covered in a mask to deprive him of blood so as to deactivate his formidable powers. Aston is surrounded by other diabolical horrors, controlled by a necromancer. But even crippled, Aston cannot be controlled and has some autonomy in his tunnel life.

The dire isolation of Samuel Taylor Coleridge’s The Rime of the Ancient Mariner pervades this text:

“Seasons pass far above me, I do not know how many.”

The story is entirely stained with spiritual desolationand decay. “Her name was Elisa, although I forget how I came to learn this.” Time passes like a fog of splintered glass. Aston was captured by a nobleman, Lord James Kanares, and upon revolution reaching out of the tunnels and bringing down Kanares’ citadel, Aston is a grim observer of Kanares’s death:

“…. now old and decrepit, fling[s] himself from one of the top windows to avoid being turned into an abomination.”

The stifling desolation and subdued delight in atrophy is matched only by the unavoidable macabre themes. When Kanares’ daughter pushes a guard into the pit, the description is both pitiless and harrowing:

“His screaming and thrashing as he tumbled was almost as delicious as his flesh would be…. he was pulled apart in a matter of moments by the clawing horrors that shared the tunnel with me.”

This sickening recantation of events extends into creepiness: Aston even deep in the mine can smell the afterbirth of Kanares’ son, and also when Elisa has her period.

Mr Bishop raised $2846 on a target of $2500 in a Kickstarter campaign to create this comic, which is available online and will be released in print in January 2017. Given Mr Bishop’s manifest talent for horror we are surprised he raised so little. This story is deliberately and carefully smeared with foulness. We applaud Mr Bishop’s tradecraft.