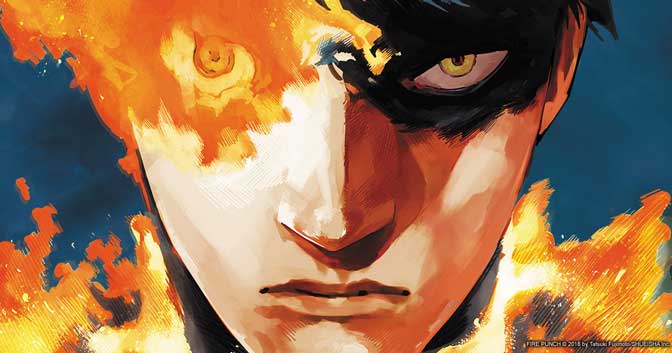 This dystopian tale has been released this month in English by Viz Media. Viz Media’s promotional copy for the manga, which appears on its website, is brief in the extreme and does no credit to the quality of the conclusion of the series:

In a frozen dystopia where inhabitants eat flesh to survive, can the destructive powers of fire bring salvation?… In the not-too-distant past, the Ice Witch blankets the world in snow, starvation, and madness, leading the inhabitants to seek their salvation in fire. With that, an unusual destiny unfolds for two young orphans, Agni and Luna, blessed with the ability to regenerate. But will this ability prove to be more of a curse than a blessing?… Hundreds of years into our future, the world is a vastly different place. The landscape is now blanketed in snow and ice, and the starving and sometimes crazed masses will do anything to survive. But it isn’t only the landscape that has changed, so have our future generations. You see, in this world, there are people blessed with special abilities, and when power and a desperate need to survive mix, the line between good and evil sometimes blurs.

Cannibalism features as a theme:

From the Viz website: After being found in the snow near death, orphans—and two such Blessed—Agni and Luna are taken in by a nearby village and nursed back to health. To show his gratitude, Agni uses his regenerative abilities to provide the village with fresh meat…his own…. Unfortunately, soldiers from Behemdorg—the kingdom seeking to defeat the Ice Witch it believes is causing all the world’s suffering—are nearby, and it isn’t long before they find the village, ransacking it to replenish their supplies. And as they do, they stumble upon the stores of meat Agni’s been providing them.

Doma—a soldier blessed with flames that won’t extinguish until its fuel has perished—takes it upon himself to cleanse the village of its sin, burning everyone and everything to the ground. With Luna’s last words still ringing in his ears, Agni fights for his own survival, vowing revenge against the man who destroyed the only life he ever knew. Eight years pass, and Behemdorg continues enslaving any physically capable person, regardless of age. Because Blessed have special abilities, they are highly sought after, which forces many to hide their abilities out of fear of being captured or killed. Desperate, the people seek a savior. And when one arrives engulfed in flames, it appears their prayers have been answered. But can a man who burns only for revenge save this world from itself?

The starting point for the plot is laid out in this summary. And thus begins a typical manga teen fantasy, this time involving the control of ravaging fire. Shonen manga are a child psychologist’s playground, filled with expressions of the desires, frustrations, and fears of children transitioning into adulthood. Indulging for a moment in psychoanalysis, here they include:

a. The ability to punish bullies (a particular concern in Japan, where bullying is a staple part of teen culture);
b. Revenge – the childhood desire to lash out at those who have wronged them;
c. Invulnerability – children struggling and resenting being physically hurt, and in the fantasy are rendered beyond that;
d. Accession to divinity – the teenaged perception that the universe revolves around him or her – and that eventually family and peers will realise that, thus reversing the power imbalance;
e. Uncontrollable destruction – teens’ frustrations exploding into inescapable wrath. But further, like Godzilla (as discussed previously), apocalyptic scenes in Japanese manga call upon cultural memories of the devastation of World War Two.

How do these themes this play out in this title? First, the main character, Agni, is impervious to harm:

In chapter 28, Agni uses his abilities to avenge his dead sister, and, typically, vengeance is proven to be sour solace.

By chapter 41, Agni is considered to be a divine being:

By chapter 45, Agni has gone on an apocalyptic rampage, in an elevation of power and a devastating manifestation of his full abilities:

These themes echo so many other shonen-type manga to the point of being entirely stereotypical in their delivery of teenage power fantasies.

But it is towards the end that the writer, Tatsuki Fujimoto, changes direction in a very remarkable way. The penultimate chapter, chapter 82, is a vision of millennia, of time passing without count. It is a thoroughly daunting sequence.

The protagonist has lost his identity, and his purpose for existence. The only sensation of time’s passage is the destruction of the Earth by a celestial body, barely worthy of notice: what the Earth actually is has become entirely lost to him.

Tens of thousands of years pass. We as readers observe, and are chilled by the sense of the passage of time. The consideration of the passage of time, and the existential consequences of such contemplation, are well-beyond what we expect of shonen manga, and unexpectedly elevate the subject matter of this title.

Chapter 82 is a remarkable piece of writing. The tile concludes with Chapter 83. Fire Punch is available in English from Viz’s website.