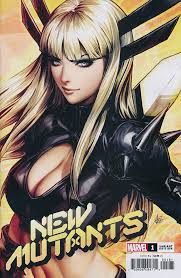 This title is refreshing. There is a breezy fun to New Mutants #1 that has not been seen in Marvel Comics’ often-grinding X-Men titles for many years.

The New Mutants are a junior superhero team – “junior” in the sense that all of the characters are teenagers and they are trainees under a senior team. Marvel Comics’ major competitor in the American superhero genre, DC Comics, has had such an ensemble going since 1966 in the form of the Teen Titans, and then another grouping called Young Justice. Marvel Comics has an occasional superhero team called Young Avengers which since 2005 have occupied a similar niche (and a bunch of even younger superheroes, called Power Pack, which had their own title in 1984). The New Mutants first came into publication in March 1983, created by legendary X-Men scribe Chris Claremont.

Mr Claremont wrote the characters as kids. They were often plainly out of their depth, not at all resembling the confident and self-assured adults of the X-Men, and occasionally reluctant participants in adventures. Particularly memorable is Uncanny X-Men Annual #10 (1986) where the X-Men have been kidnapped and suborned by the trans-dimensional villain Mojo, and the New Mutants done their graduation costumes as a prelude to a rescue mission. They are scared and unsure of what faces them. The inexperience of the players is a pervasive theme of the title.

In 1991, as superhero titles were increasingly adopting military themes, The New Mutants stopped being teenage adventures with soap opera crushes and became soldiers, under the brand X-Force. The romances still blossomed but now they seemed subsidiary to combat missions. Mr Claremont’s sense of fun was drained away.

This new chapter by writers recaptures that spirit. The characters are all relaxed and very familiar with each other. They are a happy bunch of friends, delighted with the new sanctuary for mutants (see our review of HoX/PoX – https://www.worldcomicbookreview.com/2019/10/02/powers-of-x-1-3-and-house-of-x-1-4-review-a-tale-of-civilisational-evolution/ )and who hang out and talk about who they don’t like (a fearsome mutant named Apocalypse, unsurprisingly). They decide to track down their colleague and leader, Cannonball, who is in deep space inside the alien Shi’ar Empire. They hitch a ride with (sort of) friendly space pirates, the Star-Jammers and end up in trouble on a large but mostly empty Shi’ar space station called Benevolence. Little wonder this story line is blithely entitled “Fun in Space”.

The art, by Rod Reis, is visually appealing, and reminiscent of Bill Sienkiewicz’ pencils on the original version, underscoring a desire to tap into the themes of the original series.

Characterisation of the young mutants is all in synch with previous portrayals, except for that of Magik. Magik is a Russian mutant who can teleport, but further, as a consequence of a bleak adventure as a child, is also a very powerful sorceress. Magik has recently been depicted as an insightful character with enough experience to be a professor at the X-Men’s school. In this title, Magik chugs coffee and threatens murder to anyone who comes near it. Later, in a combat exercise with an alien cyborg named Raza, she slices off his arm with her sword. The self-assured swagger has been replaced with something slightly angry – possibly a prelude to another dive into demonry by the character.

HoX/PoX foretold a future with a large mutant population contained in a space station within the Shi’ar Empire, and we wonder whether this almost idle road trip is the beginning of the colony. HoX/ PoX noted that 8,000 mutants live on Benevolence within 100 years, described as a colony on the edge of Shi’ar space and territory controlled by the feral Brood. Another 2,000 lived in a colony on Chandilar, the Shi’ar homeworld, as “warrior stock” for the super-powered Imperial Guard. these are the only populations left of Earth mutants. Will the New Mutants never return to Earth? From such an inauspicious lark with friends might come a monumental outcome.