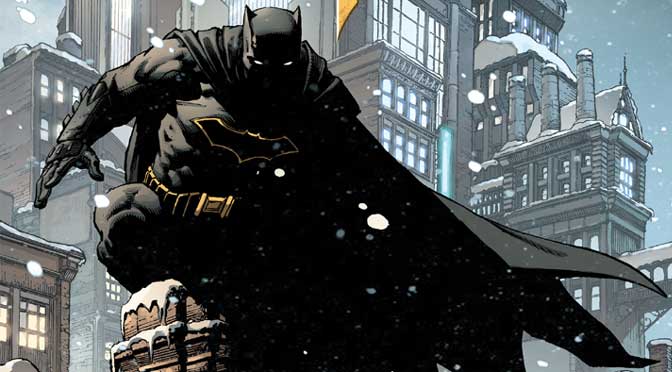 The quintet of stories that collectively make up the 40-pages of 2016’s Batman Annual #1 all have the holiday season as their unifying theme, showcasing an impressive lineup of scribes that had a hand in shaping the classic and modern versions of the Batman character. With only a limited amount of pages allotted for each story, it is understandable that none of the stories can be considered an example of each of the writers’ best work. Fortunately all of the stories, save for one (which we address below), are meant to be lighthearted and tonally appropriate for the holiday season, and so quality of writing happily gives way to Christmas cheer.

The first story, from writer Tom King, is easily the strongest of the batch. It functions as a modern take on the origin of a character called “Ace the Bat-Hound.” This character property is a relic of a bygone age when American superheroes had pets in costumes. It is also the most positive story of the bunch. And so it is curious that the story starts with a bloody full-page visual of Ace biting Batman on the neck, while the laughter of Batman’s adversary, the Joker, fills the background.

Mr King’s story provides a tragic backstory for Ace the Bat-Hound, portraying him as part of the Joker’s experiment in creating a dangerous group of playing card-themed dogs, only to leave them starving in a ditch when he lost interest (Batman’s butler, Alfred, posits that this abandonment was an intentional act by the Joker and meant to be a sick gag.)

The second story, penned by Scott Snyder, may come off as boring to some readers. That would be missing the point: the story shows that even in Gotham City, the bleak imaginary American metropolis in which Batman resides, where crime is endemic, there are still nights that are genuinely quiet and peaceful. It gives Batman a chance to slow down and appreciate the natural beauty of Gotham City and its people in winter, without forgetting that it is not in the nature of the (borderline paranoid) character to be complacent – the fact that nothing is amiss makes the Batman uncomfortable.

The third story is from Paul Dini. This is an apt choice as this is more of a Harley Quinn story than it is a Batman story. (Mr Dini co-created the villainous Harley Quinn character for the “Batman: The Animated Series” cartoon). In the story, Batman catches Harley Quinn attempting to break into the Gotham City Police Department, which she claims to be doing just to deliver cookies, candy, and a plate of pudding (which Batman discovers to be rigged with a bomb.) The story is muddled due to the confusing panel-work, and most readers may wonder what is actually going on in this story, outside of Batman and Harley’s banter inside the batmobile.

After that is a story from Steve Orlando, which seems out of place considering the somewhat upbeat tone of the other stories. It features Batman tussling with a winter-themed villain that attacked a winter theme park, after considering it an insult to his gimmick. The story features a gory climax and a cliffhanger ending, leading the reader to assume that it is a setup for a future storyline. This is superficial and violent, easily the weakest story in the annual.

Finally we have Scott Bryan Wilson’s story, which unfortunately failed to end the annual on a high note. Mr Wilson’s story is about an inmate of Arkham Asylum who breaks out of prison in order to spend the night with her true love, Jonathan Crane – the alter ego of the villain named Scarecrow. It is an interesting premise, but suffered from the twin flaws that it could have used more pages, and a mischaracterization of Batman as an overly talkative, snarky vigilante.

Batman Annual #1 is far from being a must-read. We recommend it only to fans looking for a lighthearted read during the festive season about their favorite character. There are certainly parts of the whole that are solidly written. But the quality is inconsistent and lacking – a disappointing holiday read for anyone other than dedicated Batman aficionados.