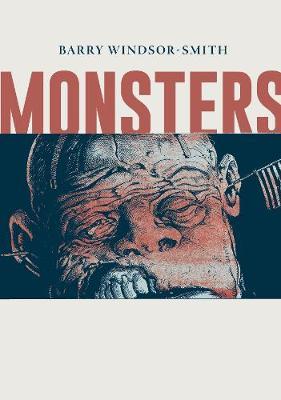 One of my favorite Marvel comics of all time is Barry Windsor-Smith’s Weapon X, a comic that tells the story of Wolverine’s origin in an interesting and creative way, avoiding many of the tropes that had plagued “origin story” superhero comics since their very conception. You can imagine my joy when I was told Mr Windsor-Smith had finally finished Monsters, his twenty-years-in-the-making masterpiece that started as a rejected Hulk story. The wait was worth it. This book is one of the best contemporary graphic novels I have read.

Monsters tells the story of Bobby Bailey, who joins the US Army in hopes to follow on the steps of his deceased father. Bobby is a very quiet and visibly disturbed young man who has problems communicating with others. Bobby seems to have no documentation, no friends and no close relatives. He is fooled into joining a top-secret army project called the Prometheus Initiative, that sees him turn into a horrifying creature, a supposed super-soldier.

This is just the beginning of the story, though. Most of the book is spent on flashbacks about Bobby’s youth, his life with his parents, and his childhood trauma. Those are the parts I will not spoil, as I believe they make up the core of the narrative.

On a purely visual level, Monsters feels great to read. The art is clean and very detailed. The fact that there is no color helps the art shine even brighter. Too much color can make it difficult to appreciate the details of a book such as this (see the colored version of Akira, for example).

Mr Windsor-Smith being both the artist and the writer allows the dialogue bubbles to be arranged in very creative ways, manipulating the reader’s perspective, and guiding their eyes through each panel and each page in a way that only Smith would be able to pull off. The way the dialogue bubbles are placed has to be my favorite thing about this book. It is very creative while never truly being distracting. The dialogue bubble placement even manages to catch important details in locations that the eye wouldn’t naturally wander off to, giving the reader extra information without really having to point it out. As a consequence, conversations never feel boring or overly long, even if sometimes they would be in any other comic, because they’re arranged in interesting and dynamic ways that force the reader to pay attention and be an active participant in what is going on.

The story does a great job at criticizing many aspects of American culture that were shaped by war and exceptionalism. Mr Windsor-Smith tells its story from different points of view, with very little indication about who will be the main character. The first real protagonist is my personal favorite character in the book: Sergeant McFarland, the man who initially recruits Bobby into the Prometheus Initiative. McFarland becomes worried about Bobby after realizing just what kind of project he has gotten the boy into. McFarland’s story crosses over with a few of the other characters, and he and his family play a very important role in the endgame. But McFarland’s most important moments are around the first half of the story, which discusses racial heritage, the belief in God, and the role of black American soldiers in a post-WWII world. McFarland is a catalyst: he is the one who allows Bobby to remember his past and push the plot forward.

The second half of the story is mostly composed of flashbacks, which introduce Bobby’s mother and father into the plot. It explores the horrors of war and their consequences on American family values, with most men coming back traumatized and hurting their families in turn. The story then changes protagonist again, as Bobby’s mother Janet takes over. Her story is how her husband became more and more paranoid since he returned from the war, as well as her struggles to protect young Bobby from an increasingly abusive parental figure.

How Bobby got to that point is much more important to Mr Windsor-Smith than what happens after. The plot threads that were established in the present are slowly unraveled through these flashbacks, giving the reader conclusions to many of the ideas set up at the very beginning of the book and resolving all of the mysteries in a very satisfying way. Bobby was being turned into a “monster” of sorts a long time before the Prometheus Initiative experiment took place. The capitalist world tends to ignore or ostracize vulnerable people instead of helping them, and only allows them to participate in society once they become useful. Bobby is a modern Frankenstein monster, manipulated and fooled by the elites into becoming an asset for them, and then discarded once he became useless.

Monsters also relies on classic superhero tropes to tell its story, although the story more a subversion than a deconstruction. The super-soldier cliché is explored in a cynical way. Captain America comics can be seen at McFarland’s house long before Bobby’s transformation, paradoxically foreshadowing the boy’s fate.

McFarland is also a black man with latent magical abilities. This is discussed in-universe at length, acknowledging the condescending and xenophobic ideas that gave birth to it. Monsters goes above and beyond the clichés of American comic-books and re-analyzes them in a very refreshing way.

by way of elaboration, at first I rolled my eyes at the hackneyed idea of ex-Nazi scientists being the ones behind the project. But the book does a very good job at demystifying Nazi science and expose their incompetence. (This is a breath of fresh air after books like Captain America portray Nazi inventions as revolutionary and incredibly advanced for their time, even achieving sci-fi levels of technology, in order to create a genuine threat.) People understand that Nazis are evil, but it is past time to read a book which addresses how their ideology fuelled the malevolence of their science. The project in which Bobby gets involved transforms him into a grotesque monster instead of the supposed super-soldier he was designed to become. It is not that the project went wrong, it is just that the science behind it was impossible and nonsensical, and itself grotesque, to begin with.

It would be easy to dismiss Monsters as yet another anti-war comic book that does the bare minimum to make its point. But the truth is that it is a complex book with many layers of commentary on American culture, violence and the nature of humankind. I recommend this book to anyone looking for a new twist on an old story, or anyone who enjoys a cerebral and dark story that is not overly cynical.