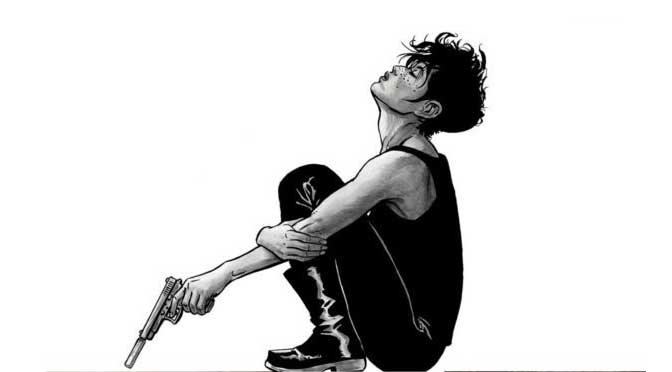 Beautiful Canvas from American publisher Black Mask Studios opens with a dead body looking directly at the protagonist. “You’re overthinking it,” the corpse says, blood still exiting the bullet wound in his head. His words are as prophetic for the reader as they are for the main character. Beautiful Canvas is a debut that is strange in many ways. Some of these oddities are intentional and effective, while others are more difficult to reconcile.

The main thread of this series is coherent enough. Lon Eisley, a hitwoman whose services are retained by a nefarious billionaire, is beginning to unravel. The stress of her work is intensified by news that her girlfriend is pregnant. Lon’s breaking point comes when she is hired to eliminate a mother and her child at the behest of her employer. Rather than kill Alex, the boy, Lon leaves with him, and the two hit the road as she attempts to protect him from her boss and superpowered mercenaries. By the end, Lon discovers the Alex himself perhaps poses a greater danger than anyone.

This main plot of a killer encountering a super-powered child covers some familiar ground, most clearly reminiscent of the 2012 American film Looper. Writer Ryan K Lindsay cites the film’s influence openly, noting the film’s soundtrack in his Afterword. Though the plot is familiar to readers, its arrangement bears the mark of another cinematic influence touted through the issue. Most notably, the issue’s title and first page contain references to The Bird with the Crystal Plumage, a 1970 horror film by famed Italian director Dario Argento.

The comic’s evocation of this particular film provides a window into understanding its structure. In her book, Broken Mirror, Broken Mind (University of MN Press), film critic Maitland McDonagh describes the habit of other Argento films to make images “juxtaposed with extreme close-ups” of objects in the environment. Beautiful Canvas emulates this juxtaposition. Throughout the issue, artist Sami Kivela adds panels that tightly zoom on objects in the environment. Used frequently throughout the issue, these moments highlight Lon’s perspective, showing a box of Chinese food or a bag of money through her eyes. The last page, a foreboding close-up of her gun, is an effective signal to further violence.

The close-up’s disorienting quality figures into the story’s progression. The issue features rapid jumps in chronology whenever comments or images in Lon’s present trigger hallucinatory flashes to an earlier conversation with Asia, her girlfriend, and a previous hit. As with the close-ups, the juxtaposing points in time are stylistically impressive and, more importantly, demonstrate the inner anxieties that drive Lon as she adopts a strong exterior for Alex’s sake.

While the main plot featuring Lon is propelled by the structural forces of this issue, the tangents along the way have far less drive. Segments that cut to Lon’s boss, Milla Albuquerque, attempt to build her as a threat. Unfortunately, the danger depends on a bizarre “murder-is-art” philosophy (we noted a similarly ineffective gimmick in another review for DC Comics’ Mother Panic). Rather than threatening or particularly funny, scenes with Milla and Moore (the “wannabe Lynch” who films murders for Milla) are grating against the comic’s whole.

Equally ineffective is a two-page scene between unknown players Eric and Keely on a Ferris Wheel. Readers learn little in this section besides that Eric has been imprisoned on this island for a number of years. He then announces he can escape before tossing an object of unknown significance toward Keely, leaving him dead on the ride. While ambiguity is a great strength in storytelling, the scene is so without context that it reads as superfluous rather than intriguing.

The issue attempts to add some information in the form of supplementary material, an in-universe newspaper article which explains that Eric is a secret agent who committed some kind of treasonous act. The inclusion of this material feels rushed, reusing a drawing of Eric from earlier in the issue to provide some context for a scene that just doesn’t quite work.

Many readers will likely miss the article, as it follows both the afterword and a three-page interview between Mr Lindsay and his editor, Dan Hill, where they discuss the work of American science-fiction writer Philip K. Dick. Why is this inclusion of Philip K. Dick featured? How does it relate to this work? To paraphrase the corpse at the beginning of Beautiful Canvas, it seems that readers are expected not to overthink it.

Like the interview itself, much of the material in the first issue fails to land, especially in its floundering attempts to establish threats for the next three issues and develop its supporting cast. Yet the main throughline provided by the character of Lon and held together by some interesting structural choices are enough to carry interest into the next installment.