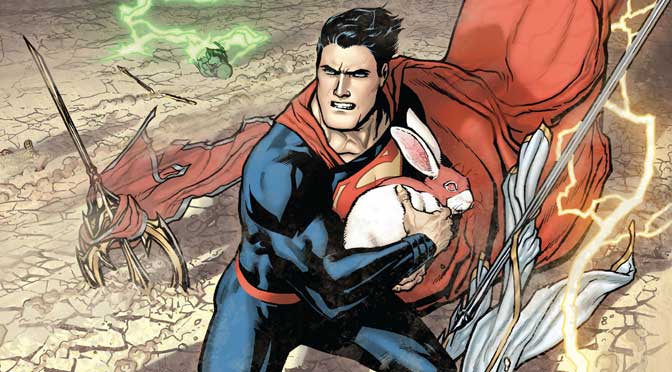 Superman #15 (review)
DC Comics, March 2017
Writer: Peter J TomasiThe cover to this issue of “Superman” depicts the globally-famous caped and omnipotent superhero clutching, all of all things, a masked rabbit, and resolutely facing into a powerful wind. Around him are the damaged indicia and equipment his apparently defeated colleagues. These absent ones are other superheroes, residing within American publisher DC Comics’ common ecosystem of characters, created so as to allow all of them to interact with each other.

Those innumerable points of interaction are both a significant attraction and the very fabric of the publisher’s shared universe of long-established and iconic properties. These characters are intangible assets, which together make up the precise value of the publisher.

Superman is surely the most valuable of these. Movies, merchandise and other forms of mass media for many decades now have been extracted in the process of commercial exploitation of the character.

But because the character Superman has inexhaustible abilities, writers have trouble rendering the character as the first amongst equals. How not to portray his co-stars as insignificant? Superman is depicted as superhumanly fast like DC Comics’ speedster the Flash: he is colossally strong like DC Comics’s property Wonder Woman; he can fly like Hawkman, a long standing character in the panoply; he projects intense beams of energy from his eyes as another significant character property of DC Comics, Firestorm, does from his hands. So, the irrelevancy of the character’s peers in most scenarios involving threat or danger is hard to avoid.

In this issue, writer Peter J Tomasi appears to want to distinguish the uniqueness of Superman in ways other than what the French call “hyper puissance”. However, Mr Tomasi has done this by borrowing heavily from another American publisher, Image Comicsand its title “Supreme”, a comic which was from 1995 to 1997 penned by celebrated English writer Alan Moore. “Supreme” was a title concerned with a white-haired carbon counterfeit copy of Superman. Mr Moore took this shabby and purloined concept and created from it a corps of “Supremes”, existing in multiple dimensions. The plot’s paradigm was that each universe has its own Supreme which serves as guardian and protector of that particular version of the Earth. Mr Moore’s storyline was very much a homage to the work of writers on 1950s-1960s “Superman” titles. It earned Mr Moore the accolade of the Best Writer Eisner Award in 1997.

In “Superman” #15, the story begins with an alternate reality in which various superpowered characters are banded together as the “Justice League of Assassins”, a grim collection of variants of DC Comics’ character properties armed for the most part with futuristic firearms. They are all slain by a seemingly endless invading force of zombie-esque aliens, called “Gatherers” by their master. The assassin Superman counterpart (who, beneath an armoured shell, appears to be flayed) is apparently captured.

In the meantime, a collection of other superheroes from various dimensions, led by a female version of seafaring superhero Aquaman, meet with Superman to explain that they are a police force for cross-dimensional threats. It seems that a Chinese version of Superman (which we have discussed previously) has disappeared and the interdimensional nature of that has attracted the attention of the coalition. An alarm sounds, and the group are alerted to the capture of the assassin-variant of Superman.

Divining that Superman-variants from multiple universes are being kidnapped, the team decide to cross interdimensional barriers and approach those versions of Superman who have not yet been defeated by the mysterious foe.

And so we witness the adoption of Mr Moore’s award winning work on “Supreme”. For next, Superman meets otherworldly doppelgangers of himself: a version where he is US president, a version where he is an American Indian and wears a buffalo scalp as a mask, a version where he is a hellish demon (called Etrigan, a longstanding denizen of DC Comics’ continuity) and what appears to be a Nazi version of Superman. Some of those interactions prove violent, and others are much more reasonable. It is apparent that Superman is, actually, not so unique and all-powerful. Dozens of versions of the character render him one amongst many, albeit with that many divided amongst parallel worlds.

Superman uses this motley collection of Supermen in a plan to lure their adversary out into the open. But Superman dupes his doppelgangers by teleporting them out of harm’s way just as the enemy appears. Interestingly, Superman himself is not recognised by the evil collector as “a” Superman. This suggests that the other Supermen are not Kryptonian, or that there is some other criteria which renders Superman different from his interdimensional counterparts.

The plot is a tricky knot for the uninitiated but Mr Tomasi nonetheless does a respectable job. Mr Tomasi seems to be using this story to head down the path of giving Superman a distinct identity and point of difference in a crowded universe.

Unfortunately, the issue further evidences that DC Comics continues in what Alan Moore has described most disparagingly as akin to dumpster-diving:

“But these days, I increasingly get a sense of the comics industry going through my trashcan like raccoons in the dead of the night.”

DC Comics first rattled the cans at night with Mr Moore’s old “Green Lantern Corps” stories. A handful of Mr Moore’s very short stories in the 1980s were reanimated by writer Geoff Johns as the skeleton and organs for “Green Lantern” plots in the late 2000s and early 2010s. Then, in mid-2016, DC Comics decided, horribly, to begin to integrate Mr Moore’s seminal work on “Watchmen” (1986-1987) into the publisher’s mainstream continuity (no doubt leading to pointless and facile stories about whether Batman can defeat the Comedian). Geoff Johns is currently in a role as creative director at DC Comics.

Now, in 2017, it seems that DC Comics has decided to mine Mr Moore’s work again, but this time the writing he did for Image Comics. It begs the question: having gone through a mid-life crisis in the 1980s, has DC Comics entered now a period of late-life corporate senility, engaging in the creative equivalent of stealing the cutlery at the buffet breakfast? (Senility would certainly explain the odd cover, which has almost nothing to do with the content.)

Perhaps the proper and less histrionic analogy instead is that DC Comics presently has no compass in respect of fresh thinking and new ideas. Directed by editors caught in an inwards spiral, Mr Tomasi, an experienced writer, does his best nonetheless.