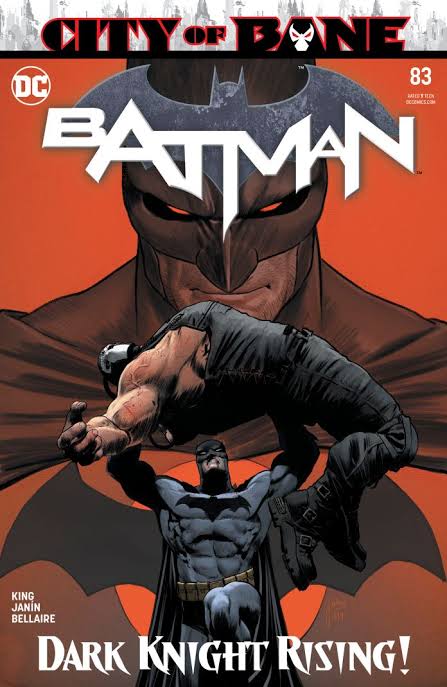 The reason for the controversy? In Batman #50, which we reviewed some time ago, Batman and his former enemy Catwoman were to get married. They didn’t: Catwoman stood Batman up at the altar.  In this issue, we see Catwoman walking the gauntlet of Batman’s legion of allies – sadly, all under the mind-control of the supervillain Psycho-Pirate. Regardless, there is a feminist swagger to the movement of Catwoman through the panels which is reminiscent of the somewhat iconic photograph of Alexandra Ocasio-Cortez’ entrance to Congress, but has even greater intensity. Artist Mikel Janin has created his own iconic sequence and particularly captures the self-assurance and even defiance of Catwoman.

But the issue is instead actually about a different sort of grief than heartbreak.

You asked me once, as you fell from the sky… Would this be a good death? Would your parents be proud? At the time, I gave you the answer you needed. As I did today, I lied. But now please forgive a man at his end a touch of the truth. There are no good deaths. Not for parents. Not for children. But there are good lives. And you, my son, are living one.

These are amongst the last words of Batman’s oldest confidant and father figure Alfred Pennyworth, who has been murdered by Bane. Bane ranks amongst the most dangerous of Batman’s many adversaries, and is perhaps most famous by Batman’s readership for breaking Batman’s back, as depicted in Batman #497  (1993). (Curiously, Bane does not feature in much of the overall story-arc – the real villain seems to be Batman’s – previously deceased – father, Thomas Wayne.)

Pennyworth has died in comic book storyline’s before. In 1984, acclaimed writer and editor Archie Goodwin, in the introduction to the collected edition of Manhunter, wrote about his choices in 1973 in taking on the authorial chores of Detective Comics, a very long running series featuring the adventures of Batman. Mr Goodwin ruefully notes that he could not go down the path of killing of the main supporting character to add some octane to the title, because Alfred had already been recently killed off and brought back.

This time however the death seems very poignant. Writer Tom King does not use much in the way of dialogue in this issue, and for the most part relies upon a monologue – a recording by Pennyworth made to Batman before his death. It is an intimate recount of Pennyworth watching his son in all but name become a man. Death of a family member is always a deeply personal matter, and as a reader we are so entranced by the monologue and Batman’s grief such that it seems an intrusion. Here, we see Batman struggle with the reality of never being able to say goodbye to the man who raised him after his parents were murdered. This is the death of the third parent – the real parent.

Pennyworth’s words allude to Frank Miller’s classic Batman sorry, The Dark Knight Returns (1986). Clearly harbouring a death wish, Batman is shot in the chest, and is falling from the sky.

“A fine death.” But Pennyworth’s words decry that. There are no good deaths. There are only good lives.

b. ” this story relies on a “shock death” that feels decidedly unshocking, given it will be undone with yet another crisis looming, and that dulls any emotional impact this might have. That’s something the creative team can’t really control, save that it was their choice to kill a character.” – https://geekdad.com/2019/11/review-batman-83-a-final-goodbye/

c. ” Tom King may have the strangest sense of pacing in the DC stable, and it alternates between fascinating and frustrating, especially in reading Batman #83.” https://geekdad.com/2019/11/review-batman-83-a-final-goodbye/

But in our view, the melancholy notes in this issue are extremely well-executed. Any doubts about his technical prowess at this stage in his writing career should be negated by this issue.