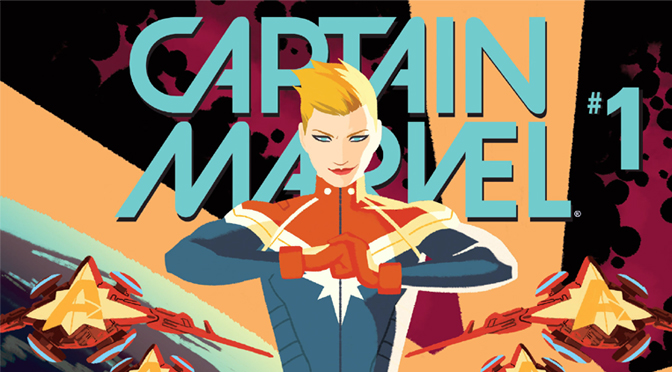 Captain Marvel #1 is part of American publisher Marvel Comics’ ANAD (All New, All Different) campaign, which is a relaunch of many characters and books apparently in order to attract a new generation of fans and give writers a clean slate in character development and reinvigoration. The other ANAD titles are clearly aimed at a younger demographic, full of fresh new faces, and premises that will be relevant mostly to teenagers.

The new title “Captain Marvel”, on the other hand, is an outlier. This character has a particularly strident cadre of fans which style themselves as “the Carol Corps”. Marvel Comics have been understandably keen to maintain the attention and affections of this group, to the point of including the name “the Carol Corps” (the name derived from “Carol Danvers”, Captain Marvel’s alter ego) in the title of one of their publications. This adoration and the announcement of a Captain Marvel movie for 2018 has attracted mainstream interest from Time Magazine to women’s haute couture magazine Marie Claire.

Marvel Comics have also carefully cultivated the idea that the character “deserved” more prominence within its pantheon of characters. This marketing initiative was partially based on the reasoning that the character which contained within its name the publisher’s house brand should be a flagship character. It was also perhaps motivated by Marvel Comics’ Director of Content and Character Development, Sana Amanat, noticing that Marvel Comics, unlike its traditional rival DC Comics, had no top tier superpowered female lead, discussed further below.

By way of a brief background, Captain Marvel started as a supporting character to an alien superhero called “Captain Marvel”. Upon gaining superpowers and a 1970s feminist revamp, the character came to be called “Ms. Marvel” and later “Warbird”. The character was not popular enough to support its own title for long, but frequently fulfilled important but ancillary roles in plots contained in various “Avengers” titles published by Marvel Comics (including one miserable story written by David Michelinie and edited by Jim Shooter in 1980 where the character was in essence drugged and raped and then ran off with her interdimensional rapist).

“Captain Marvel” #1 starts with the resolution of the character’s decision to move forward and start taking more control over her life, which included leaving the superhero group called the Avengers and, curiously, getting a shorter haircut.

The shorter haircut has been very controversial. It is seen by some fans as an attempt to make the character look masculine. But the short hair is only one aspect of Marvel Comics’ effort to de-sexualise the character. As “Ms. Marvel”, the character is an attractive, busty blonde which flew into peril wearing what was essentially a tight-fitting swimsuit. The character’s breasts are large and full. Long locks of hair functioned in the same way as a cape on other flying characters – so as to indicate movement, particularly direction and speed. But long hair also conveys sensuality and this accentuated the character’s role as a sex object.

In story, the character explains the new look as a reflection of both a military background, and practical reasons – fights are generally easier if you do not have a whole head of hair covering your view all the time. And the new costume resembles a flight suit – appropriately for an Air Force colonel.

But there is no denying that the character has undergone enormous visual changes as part of its transformation from a sex object to a nascent feminist icon. Here is a picture of the character as drawn by Frank Cho, compared to a more recent depiction:

This was the outcome of the redefinition of the character by writer Kelly Sue DeConnick. In interviews summarised in an article on the character appearing in Time Magazine on 4 November 2014, Ms DeConnick notes the dearth of strong female protagonists in contemporary Western fiction. The fan base of “the Carol Corps” was at the very least facilitated by Ms DeConnick, tapping into a female readership’s (if not feminist) ready acceptance of a superhero character which was at the upper end of the spectrum in respect of superpowers, was not a female distillation of a male character, and which had the swagger to match. Ms DeConnick has specifically stated that the character is meant to have the demeanour of test pilot Chuck Yeager. This is a deliberate breakaway from what Ms DeConnick describes as the typical patriarchal power fantasy repeatedly manifest in superhero comics.

And it works. In this first issue, Captain Marvel says her goodbyes to her former team mates in the Avengers as she is transported to the Alpha Flight Space Station, where she is to serve as its commander. This is an indication of the series’ new direction, as it looks like the character will start dealing more with threats above Earth, dealing with enemies that are more suited to the alien superhero group called the Guardians of the Galaxy than the Avengers.

When Captain Marvel arrived at the station, the character gets the same anxieties and treatment as anyone who has ever been transferred to a new department or new job. First, we get the greetings from familiar faces who like her (including the creepy ones from the pint sized hero Puck) and the intimidating treatment from the stoic Agent Brand. Agent Brand is a creation of writer Josh Whedon when he was involved in his fun stint on “Astonishing X-men” (2004), one of the more forthright and ruthless characters in that series.

The next few pages deal with Captain Marvel’s boredom over what constitutes her tasks, which is to negotiate with extraterrestrial contractors in charge of the space station’s sanitation and maintenance. The negotiation is soon interrupted by an alert over an approaching asteroid, which is not really the station commander’s job but is a perfect excuse to get out of a boring meeting.

The asteroid is of a minor burden for Captain Marvel, whose powerset includes flight, durability, and super strength. But the potential asteroid strike is not an accident. There was no collision that would have sent the asteroid flying towards the space station. Its trajectory was set by an explosion caused by a spaceship originating from the same planet as one of the sanitation contractors.

Before Captain Marvel is able to interrogate the alien sanitation contractors, another space ship appeared on a path towards the station. The issue ends on a cliffhanger: the ship is from an unknown origin, and completely empty save for desiccated corpses and a scratched door bearing Captain Marvel’s own starburst insignia.

“Captain Marvel” #1 is a great example of what Marvel Comics can do with their ANAD publishing campaign. It sets an established yet underrated character on a new path, starts out with the character acclimating to her new environment, adds a couple of pages of action, and ends with a teaser for a bigger story.

The writing is snappy, and has a few bits of witty banter between Captain Marvel, her coworkers, and some guest stars, but none of it feels forced. Unlike other Marvel Comics’ titles, and surprisingly given the very vocal Carol Corps, there is no blatant attempt at pandering to a specific demographic. Things could change over the next few issues, but Captain Marvel right now feels like it is a comic that was written for the purpose of telling a good story.