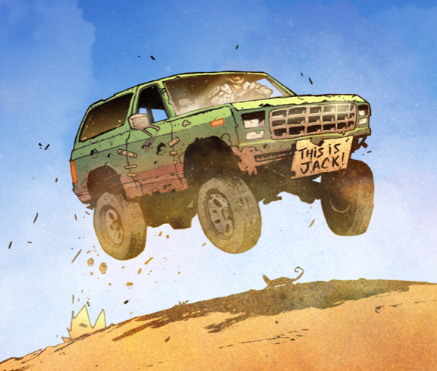 The hook to this title is the droll comedy. The issue opens with Jack holding up a bar on some remote planet, gravelling away to an awkward and silent audience of one overweight man in a trucker cap. Jacks talks to the resilience of mankind in the shadow of the Four Horsemen of the Apocalypse, how humans improbably withstood civilisational collapse prior to alien contact, and coins barfly poetry such as, “A beacon piercing through evil’s satisfaction” and learned but off-timed mixed metaphors such as, “The narrative was woven. The pieces fell into place.” In the background, a bumbling card game has evolved into a messy shoot-out. “Make sure to get the jibblets!” screeches someone off panel to a person jockeying a bloodied broom. This comic could consist of nothing but Jack’s solemn pontification with gallows humour bar fights in the background, and we would snort with laughter from beginning to end. Writer Cody Fernandez has the impeccable absurd comedic timing of Monty Python.

Jack descends into the pathos of a flashback. We see the coming of zombification of humanity in the year 2000, featuring a somewhat chilling personification of plague addressing the stained seats of the United Nations General Assembly between wheezes from an oxygen tank – a jarring intervention in the story. The story reads for a time like a Mad Max sequence: in the flashback, cannibalistic “joyboys” attack Jack and the girls he has saved from starvation or worse. “What’s that tasty smell in there, pretty boy?” snarks a joyboy from the roof of Jack’s car. “Gunsmoke!” snarls Jack between gritted teeth, without even so much as a wink to the reader, as he blows the bad guy’s head off with a shotgun.

Towards the end we visit a mystic alien telepath who resembles a Native American shaman, and Kitty the thoroughly intimidating Sheriff. This comic has a splash of Judge Dredd, a shot of The Umbrella Academy’s zaniness, and a big pour of Grimjack’s Munden’s Bar. Jack Irons: The Steel Cowboy #2 is chaotic, anti-erudite, and enormous fun.

The title will soon be available on Comixology. Here is a link to issue 1: https://www.comixology.com/Jack-Irons-The-Steel-Cowboy-1/digital-comic/762994