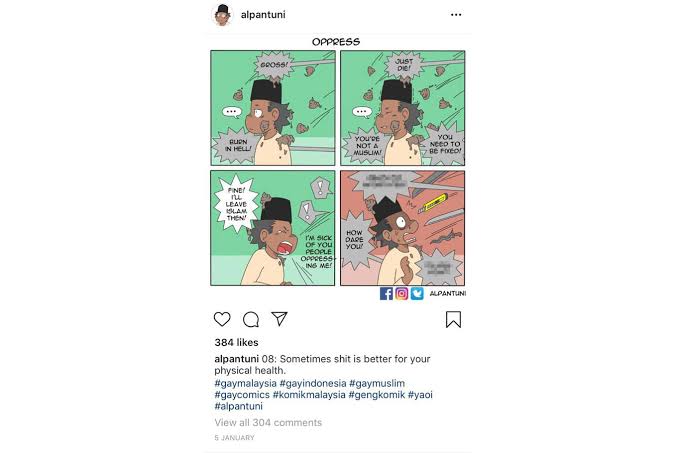 An Instagram account, @Alpantuni, appeared in January 2019. It featured the description “Gay Muslim comics for people who are able to think.” The account promoted a Bahasa Indonesian comic with themes to do with homosexuality and Islam.  It did not hold back in depicting Islamic homophobia: in one story, the major character being told to “burn in hell” with faeces thrown at him by his tormentor.

On 2 February 2019, Indonesia’s Information Ministry wrote to Instagram. It alleged that the account violated an Indonesian law on distributing pornography. The Ministry threatened to block Instagram from being accessible within Indonesia. This news broke on the website Coconuts.co/Jakarta.

The New York Times has observed:

“Some characters in the comics are criticized by others as “stupid,” “uncivilized” and “godless” for being gay. The Coconuts report said that the comments on the strip’s Instagram account were “overwhelmingly hateful (and a pretty accurate reflection of the L.G.B.T. haters depicted in the comic itself).”

One critic wrote, “If you want to be a Muslim, don’t be gay.”

“It’s your right to be godless, but do not be both Muslim and gay,” wrote another. “That is just greedy.””

Instagram is reported to have refused the Ministry’s demand. But the comic and its content has become a torrid subject in Indonesia, at a time when politicians within the normally tolerant country are courting conservative Muslims in the lead-up the the next election. Perhaps @Alpantuni decided, amidst the controversy, to quietly disappear.

Diplomatic Dispute between Japan and Mongolia over Gengis Khan Manga