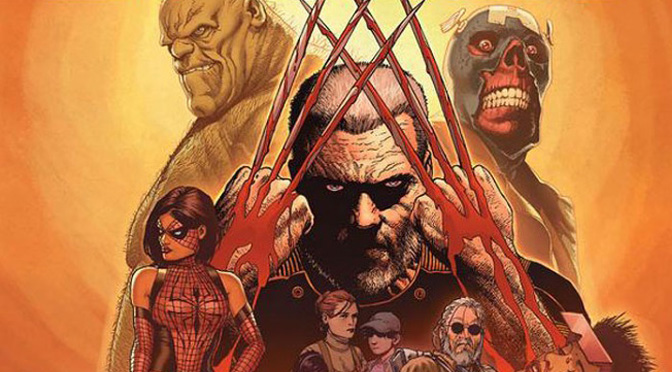 Under the moniker “Secret Wars”, Marvel Comics have recently and confusingly sewn together several of its character continuities in a way which is utterly impenetrable to the casual reader. The idea is entirely and brazenly commercial: to ensnare readers into buying more than the one regular series by smearing the plot amongst many series. For those who do not succumb to this, plots of individual comics are turned to staccato mush.

One of the most commercially successful of the continuities which have been intertwined in the “Secret Wars” mix is from “Old Man Logan”, a story penned by Brian Michael Bendis in 2012. The plot of “Old Man Logan” extrapolates a global victory by Captain America’s arch enemy, the Red Skull. The Red Skull divides the United States amongst his allies and sets up a Nazi state around Washington DC. The Red Skull’s leadership and coordination of likeminded supervillains has resulted in the death or disappearance of most of the world’s super-powered champions. One of Marvel Comics’ most successful characters, Wolverine, is portrayed as a beaten old man, engaging in subsistence farming out of the dust. Wolverine reluctantly joins a blinded archer, Hawkeye, on a transcontinental adventure which guides the reader through the various conclusions to Marvel Comics’ cast list, with a bleak outcome. Wolverine only returns to his usual, brutal self when his family is killed by the cruel offspring of another formidable character, the Hulk. Wolverine in turn kills the Hulk, and kidnaps the Hulk’s infant orphan, intending to raise the baby as his own son. It is a conclusion to Wolverine’s story, with the character literally riding off into a dusty sunset on a motorcycle at the story’s end.

For the devout, tales of the conclusion of a continuity have an irresistible appeal. The mainstream publishers’ most valuable intellectual property assets are the characters and they are rarely permitted to extinguish. The regular reader is left with knowing certainty of perpetuation, with no real prospect of a conclusion to the adventures. Like James Bond, Ridge Forrest, and Archie, Wolverine will outlive us all.

The mainstream publishers have seen that various stories over the years which invoke an ending to a character, but without the need for the publisher to commit to that ending, sell well with readers. Marvel Comics have revealed many futures for Wolverine ranging from contented husband to incinerated corpse. But the attraction of the 2012 storyline for “Old Man Logan” was that evil triumphed. Wolverine was duped into killing his fellow X-men, and it left him suffering from pronounced post-traumatic stress disorder. Mr Bendis’ efforts on that story were a poignant, violent blend of Clint Eastwood’s Unforgiven, and Mad Max. It received significant commercial success.

This 2015 storyline is entertaining but, sadly, predictable. Wolverine kills a post-apocalyptic warlord. The dead man’s little boy swears vengeance. The infant Hulk, being raised by both Wolverine and Danielle Cage (in mainstream continuity, a baby born of two superheroes) is left in his crib while Wolverine endeavours to climb the walls which separates continuities. Mr Bendis telegraphs the plot, disappointingly for a writer of his talents: as time and space have been twisted by the complicated overarching plotline of Secret Wars, Wolverine will no doubt return to his own continuity in a future where Danielle Cage is middle-aged, the infant Hulk is an adult, and the warlord’s son is old enough to enact his revenge.

There are some editorial spills, too. In the 2012 storyline, one of Marvel comics’ premier superhero characters, Thor, is described as murdered by two villains. In the first issue of the 2015 series, Wolverine is plainly aware that perennial villain Doctor Doom is the omnipotent overlord of the Secret Wars melded-universe, and that “the Thors” (various characters who have held the title and powers of Thor over the years of Marvel Comics’ continuity) are compelled to be Doctor Doom’s enforcers. But in the second issue, Wolverine is baffled to see a version of Thor patrolling the wall: “Why are you dressed like a dead man?” he screams at the Thor before being struck with a bolt of lightning. Whether the characters are or are not aware of what lies beyond their respective walls is not clear, but may be part of the overall Secret Wars plot superstructure.

In any event, Wolverine and a telepath named Emma Frost (the version of which Wolverine was familiar with had just died) are “absolutely baffled” by each other. The search for explanations encompass cloning, time travel and psychosis, and no one thinks of alternate realities despite their mutual and very significant experience with this concept.

It all reads weak. Mr Bendis’ forte is quick-paced, entertaining dialogue. When Mr Bendis was writing for one of Marvel Comics’ leading publications, “All New X-men”, his photorealistic dialogue worked well with the cast of youthful characters. Stutters conveyed bafflement or slow comprehension, rapid fire chatter conveyed raw and unfiltered fear, and crowded dialogue contained in multiple word balloons in a panel, with many characters trilling at once, projected confusion and chaos. Mr Bendis’ skills in this regard are second-to-none in his genre.

But in this 2015 version of Old Man Logan, there are no young or humorous foils. (Hawkeye, his relentless optimism and jokes shining against Wolverine’s glum defeatism, was shot in the head in the 2012 storyline.) Mr Bendis thankfully avoids the laziness and pathos of inner monologue to drive the plot. But there is little opportunity of Mr Bendis to play to his strengths: dialogue and humour.

“Old Man Logan” promises to pit Wolverine against one or more inter-dimensional doppelgangers no doubt with his usual success. We also have the looming plot twist of an aged Wolverine returning to face his aged cast. Sales of the series have been very strong. Let us hope the audience sees something more substantive before the end of the series and the deconstruction of the Secret Wars plot structure.