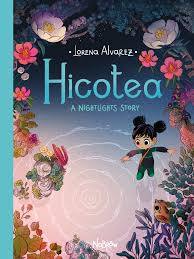 NoBrow Press, purveyors of artisanal graphic novels, describes the writer and creator of Hicotea: a Nightlights Story this: “Lorena Alvarez was born and raised in Bogotá, and studied Graphic Design and Arts at the Universidad Nacional de Colombia.” Having read this comic, we assume she was the paramount artist within her class.

Hicotea: A Nightlights Story is a sequel to Nightlights. We have not read Nightlights, and we did not find that a barrier to enjoying this comic. The main character, a little girl named Sandy, attends a Catholic school, herded by semi-amused nuns. A field trip to a nearby wetland sanctuary finds Sandy and her friends poking about. A wonderful two page /one panel scene, rendered in meticulous detail, follows Sandy as she meanders through the wetland. It reminds us of the sort of map which would have been drawn by a child of a parkland.

The text borrows from C.S. Lewis’ Alice in Wonderland. Sandy fossicks about and finds an empty turtle shell. But the shell is bigger on the inside than the out, and in she tumbles.

Within the shell is a turtle named Hicotea. Hicotea has a passing resemblance to the turtle from the Disney motion picture Kung Fu Panda, although that might be a natural inclination to depict a wise and spiritual turtle in a certain, wizened way. The interior Hicotea’s shell is a grand Victorian era cabinet of curiosities, with framed relics, oddities, and specimens lining the walls. One picture, ostensibly of the wetlands, is blank, and Sandy finds herself entering it as she would a window, a dream within a dream.

The interior of the picture is a place of erasure. Only a small cave houses the survivors of the wetlands. They lament that Hicotea has turned away from the world, and that they are being hounded by a monochrome adversity. Colour is an important aspect of this comic. Most of the pages are reminiscent of an illuminated manuscript, or a brilliant cathedral stained glass. When Sandy enters the blank window, the differences between the worlds is stark: one is glorious with colour, and the imperilled plane is bleached.

There is a psychological aspect to this story which is only apparent on a second read. Sandy’s innocence manifests as a happy childhood. But the older kids at the school are a contrast: they talk about cheating in class assignments, sing about wearing short skirts (to the mild horror of the nuns), and one of them, literally mucking up a dissection of a frog in class, dumps the frog corpse into a waste bin without a second thought. Sandy peers in to look at the frog’s body. The frog is devoid of any expression, but there is nothing pretty about its demise: the frog’s abdomen has been opened, its skin pinned back, and its organs tumble out of its body. Part of this story is not just the entertaining, epic fantasy of saving the wetlands. It is about how a little girl processes a stark vision of a horrible death.

On a more superficial level, this is a beautifully illustrated book and can be enjoyed just for that. It has always seemed to us that NoBrow has a refined eye for talent, and in that regard, this book is an appropriate addition to its stable.