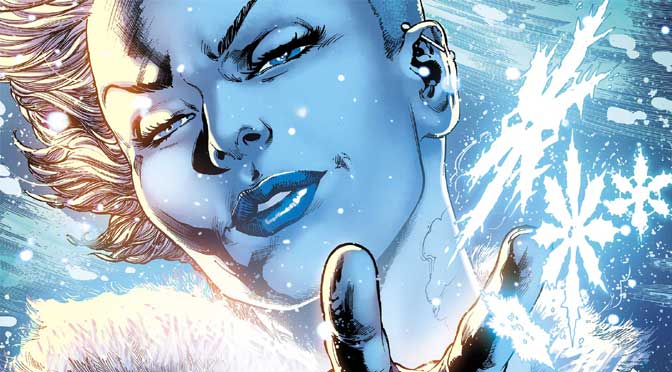 “Justice League of America Rebirth: Killer Frost” #1, is a new comic book from American publisher DC Comics that focuses on the fictional supervillainess Killer Frost. This character has frost/ice-based powers and is very frequently used as the main adversary for the superhero Firestorm.

In DC Comics’ continuity, there have been a number of fictional characters who have assumed the “Killer Frost” identity. “Justice League of America Rebirth: Killer Frost” focuses on the newest one – a former S.T.A.R. Labs scientist named Caitlin Snow, who has been transformed into a “heat vampire” through an accident involving a “thermodynamic engine” and a group of terrorists. Only in American superhero comic books would a character with the surname “Snow” be granted the power to create ice (and we have seen this before, in Warren Ellis’ “Planetary”, wherein the main character Elijah Snow controlled ice through “heat subtraction”.)

Unlike her predecessors, Caitlin Snow is not evil for evil’s sake. The character is only driven to criminal acts out of revenge, survival (she needs to absorb heat from living things), and a desperate need to find a cure for her condition.

This comic picks up after the events of the recent “Justice League/Suicide Squad” crossover story (the first issue of which we have reviewed recently), where Caitlin Snow “earned” a chance to be released after saving the Justice League from the villain Maxwell Lord. The issue starts with Caitlin Snow being taunted by Suicide Squad’s handler Amanda Waller, who does not want her to leave the Suicide Squad program: a government project whereby super villains are coerced into secret government missions in exchange for commuted prison sentences.

Waller has always been characterized as manipulative and willing to resort to inhumane tactics in order to get her dangerous and uncooperative charges in line. In the story, Waller uses government bureaucratic red tape as a convenient excuse to delay Caitlin Snow’s release from prison. The comic does not make it obvious whether Waller is doing this because she does not believe that Caitlin Snow has reformed, or because Waller simply does not want to let go of a useful asset.

But the method of extending Killer Frost’s time in prison is plain: keeping Caitlin Snow starved of heat and tempting her by making her share rooms with other unruly inmates, at some point even keeping her in the same room with heat-powered superhumans. This is very clever on the part of Waller (and writers Jody Houser and Steve Orlando). If Caitlin Snow breaks down and consumes her cellmate, nobody would then care about the loss of a murderous criminal and Waller would retain the services of a very powerful operative.

Additionally, Waller would then be able to position herself on the moral high ground and prove her point to DC Comics’ paramount (and seemingly omnipresent) superhero, and Waller’s intellectual and ethical adversary, Batman. Indeed, Caitlin Snow is being freed at the behest of Batman, who is recruiting the villain to be a part of the group of superheroes called the Justice League.

There is no action at all in the story, but it does not suffer at all from it. The main draw is Caitlin’s struggle to earn her freedom while defying both Waller and the public’s perception of the character’s murderous inclinations – the sobriquet “Killer Frost” naturally casts a poor slant on the character’s motivations. Adding complications to the story is her new cellmate Heatstroke, who is similar to Caitlin Snow in the sense that the character is not a career criminal and actually one of the few people in prison to have shown Caitlin a modicum of kindness. However, her abilities are fire-based, making her extremely tempting to the “hungry” heat vampire.

Waller’s final play involves sending a group of thugs who want to kill Heatstroke – so Caitlin now has to defend her friend from the thugs, who can be used as heat sources as well. Caitlin overcomes the need to consume and pulls through, merely disabling the thugs instead of feeding on them.

Like a vaudevillian devil, Waller confronts Caitlin Snow and taunts her again, only to be stopped by the sudden appearance of Batman, who demands the release of Caitlin Snow.

Batman’s appearance as saviour is not the twist of this issue, and the comic is all the better for it. In the final pages, Caitlin celebrates her freedom from prison interspersed with flashbacks showing how the character managed to pull one over both Waller and Batman: unknown to everyone except the reader, Caitlin Snow has been feeding herself by absorbing minute amounts of heat from everyone she comes across – from jail guards, to doctors, to her cell mates, and even Batman himself via a handshake.

The twist at the end ensures that the comic does not fall into a clichéd portrayal of a villain reforming for no real reason. Caitlin has not suddenly become altruistic. The character has retained a dangerous parasitic drive, but is depicted as having enough smarts to hide the fact.

Overall, we are surprised at how decent “Justice League Rebirth: Killer Frost” #1 turned out: we have not been kind to DC Comics’ other “Rebirth” sub-branded titles. This comic explores interesting concepts: management of addiction, resistance to temptation (with Waller as demon and Batman as angel), and ultimate redemption.