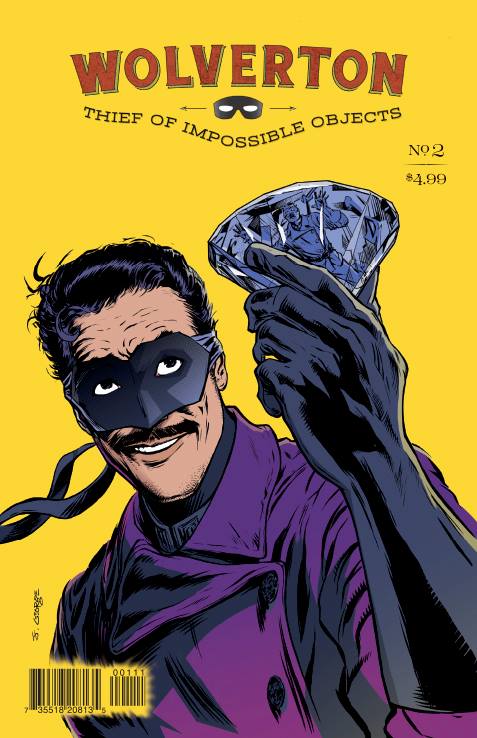 We have previously reviewed the first issue of Wolverton, an 1930s pulp adventure comic with shades of dark fantasy by writers Michael Stark and Terrell T. Garrett. That first issue focused on crime as a source of entertainment and distraction to a highly capable and apparently bored millionaire. The title was all about the heist, with some improbable magic thrown in for good measure. It needed little explanation beyond the fact that the title character, Wolverton, was a thief who wore a mask and went by the sobriquet “The Black Cat”. As such it was fun exploration of a gallivanting caper, with an utterly impossible outcome.

The second issue goes in a slightly different direction. In the first issue, the Black Cat stole at the apparent direction of a cranky priest. Now we see the Catholic Church as a bulwark against murderous sorcery, and the Black Cat is one of a long line of disposable thieves which the Church deploys to acquire relics which might trigger the destruction of civilisation. Wolverton now also has a larger supporting cast: the rival Inspector Henry Munroe of Scotland Yard; science fiction writer HG Wells as a mad inventor of robots and time machines; the ardent police inspector; the beautiful red-headed stage singer Isabella Conte; and Dorian Grey is further fleshed out as the ultra-vain villain.

There is some poor research at play here:

1. Mr Wells was a writer who was nominated for the Nobel Prize for Literature four times. Wells had no skills as an electrical engineer nor a robotics engineer. Wells certainly could never have manufactured the automaton sitting at the theatre, filling in for Wolverton has he goes off to steal the Hope Diamond.

2. Dorian Grey is the title character of Oscar Wilde’s sole novel, The Picture of Dorian Grey (1890).For those who don’t know the premise, Grey has pledged his soul to youth and vitality, and then indulges in all manner of distasteful hobbies, with the physical effects of this transferred magically to a canvas portrait. While Grey retains an artistic perfection, the hidden portrait slowly represents Grey as a disgusting and bloated devotee of “the new Hedonism”. Messrs Stark and Garrett have unexpectedly deployed Grey as the ringleader of a masked cabal of sinister devil-worshippers with plans to take over the world. Mr Wilde certainly never envisaged that Grey would want that level of responsibility and power, and would be too wracked with guilt and the awareness of the erosion of his soul to contemplate a rise to power. As as ambitious fiend in the shadows, Grey is the wrong choice of cast. We wonder whether Messrs Stark and Garrett have formed the wrong conclusion after watching the motion picture version of The League of Extraordinary Gentlemen.

But these are minor quibbles. Wolverton #2 retains the sense of light-hearted fun which we saw in the first issue. “Toodle pip, coppers!” yells the Black Cat as he utilises Mr Wells’ invisibility formula, strips down to nakedness, and springs away over rooftops. We laugh at Wolverton’s brazen antics, and at the same time sympathise with poor Inspector Munroe’s frustration and, later, heartbreak.

Oddly, the thing which strikes us about this book is the symbolism of the pencil moustache. Young-ish readers might associate the pencil moustache with Dave Gibbons’ rendition of the amoral character The Comedian in Watchmen. Before that, in the 1960s, artist Gil Kane used pencil moustaches to define villains: characters such as Sinestro, Krona, and Hector Hammond fought the smooth-faced Green Lantern. Before that, back in the 1930s and 1940s, pencil moustaches were neat and dapper adornments. Mr Stark has plainly alluded in tweets that the dashing, womanising Australian actor Errol Flynn is the inspiration for Wolverton, and without his pencil moustache, the Black Cat would perhaps not be as swashbuckling as he is.