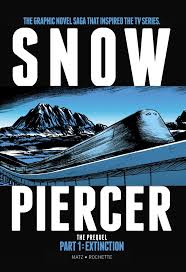 Snowpiercer is based on an original idea by Jacques Lob.

First off, full confession. I’m a HUGE fan of the Snowpiercer franchise. I loved all three volumes of the French graphic novel and the 2013 film was a brilliant reboot by a director that western audiences finally realise exists – Bong Joon-Ho. So far, I’m also enjoying the series on Netflix.

Here’s the blurb for those who haven’t read the graphic novels, nor watched the film or the tv series:

“Coursing through an eternal winter, on an icy track wrapped around the frozen planet Earth, there travels a train that never stops. This is Snowpiercer: one thousand and one carriages long. The last bastion of human civilisation. But where did it all begin?”

Intriguing right? Well, I’ve certainly always been curious about what type of world existed before the remains of humanity crammed into the Snowpiercer, so I was thrilled when I heard Titan was releasing a prequel. Prequels don’t ordinarily fare too well compared to the original properties, but I’m an absolute sucker for them.

The first sentence of Extinction: Part One immediately sets the tone for the book’s message – “Earth is being ravaged by a seemingly incurable disease – Mankind.” Here’s the video trailer from Titan:

The story is set just prior to the near-extinction of humankind and we’re presented with a society that has pushed Earth to the brink of complete environmental destruction. A good chunk of the plot deals with the struggles of a group of violent extremists who wish to speed along the extinction of humankind, in order to save the earth, while another group, led by the enigmatic Chinese billionaire Mr Zheng, rush to build the Snowpiercer as a means to save humankind from complete demise. We also witness the more personal story of a young boy, Jimmy, as he strives to win seats on the Snowpiercer for he and his father. I don’t want to spoil the plot too much, but part one ends just as a nuclear winter is about to be triggered and the Snowpiercer has set off on its cyclical journey.

While Matz’s story is quite simple, with not much nuance to its message, it was engaging, easy to follow and contained realistic dialogue and characterisation. Meanwhile, the underlying message makes us question our own role in the ongoing destruction of our environment. At what point will we as a collective decide we’ve had enough and finally cease our own contribution to climate change?

In addition to the more obvious message about climate change, the prequel also highlights the ‘your terrorist, my freedom fighter’ conundrum. We are presented with a brutal and unforgiving extremist group, and while we may not agree with their means, nor even their ends, most would probably agree on their cause. What extremes should we go to save our planet? This is a well-trodden conflict in media, but it did add a nice layer to the story.

The art team did a wonderful job bringing the story to life. Jean-Marc Rochette worked on all three previous volumes so it was nice to see him returning as the line artist for the prequel. I love Rochette’s work, and his rough lines, with loads of shadows, reminded me of Paul Acazeta’s art in one of my favourite modern comics – Outcast. Snowpiercer just wouldn’t be the same without Rochette. As for the colours, they were as gorgeous as expected. I’m a huge fan of José Villarrubia’s work. I’d read an accountant’s handbook if he coloured it. Lauren Bowes’s letters flowed effortlessly and ensured the dialogue and panels were easy to follow.

I liked that the lead characters were ethnically quite diverse, but I would have liked to have seen more women characters (there was only one). Also, I’m not sure why Titan split this volume into two parts, which probably means it will be more expensive to read than the first volumes. Not a huge gripe though.

I hope you all get a chance to read this comic. Not only is it a brilliant read, with beautiful art, but it’s refreshing to see a French comic book franchise thrive in the Anglophone-centric mainstream comics industry.