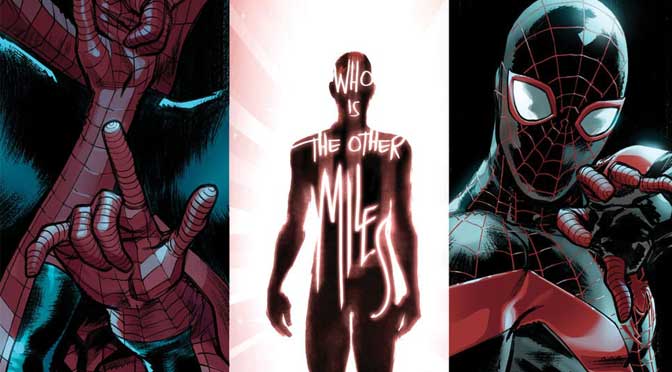 “Spider-Men II” is a new comic book series from American publisher Marvel Comics. It focuses on the two characters that are currently fighting crime under the Spider-Man alter ego, named Peter Parker and Miles Morales. The former, a character established in 1962, is well-known enough amongst fans of the superhero genre so as to forego introduction. But the latter version of Spider-Man is relatively new. The character’s alter ego is Miles Morales, an African-American teenager from a parallel reality called in Marvel Comics’ parlance Earth 1610 (the “Ultimates” universe, a quasi-imprint of Marvel Comics, established in 2000). This character developed arachnid-based powers after being bitten by a radioactive spider, and took over his universe’s deceased Peter Parker in the role of Spider-Man.

In 2015, after three failed re-launches, Marvel Comics ended its once popular Ultimates line. But some characters were popular enough with Marvel Comics’ readership or editors such as to make their way to Marvel Comics’ mainstream continuity’s reality (called Earth-616). Miles Morales was one of those who crossed over, and started fighting crime alongside the mainstream Peter Parker in Marvel Comics’s fictional version of Manhattan.

Since this is the first issue of this title, it is understandable that most of the pages are devoted to plotbuilding. But there is a smattering of mandatory (for superhero comics) fight scenes throughout the issue that serve to break up the internal monologue. As Tim Adams at CBR.com correctly notes, “All this occurs while Bendis packs in enough internal dialogue as the page allows, because if there’s one thing Bendis’ Spider-Man excels in, it’s having a one-sided conversation with himself.” This is true. Mr Bendis is a recidivist in equating teenage angst with uncertain monologue.

It also intersects, frankly, cringe-worthy dialogue exchanges between teenaged characters. A review at IGN broadly agrees: “There’s plenty of high school social drama to be had, as well as some fun banter between Peter and Miles as Bendis hashes out exactly what the two characters remember about the late Ultimate Universe. Solid material all around, but again, nothing terribly different from what we’ve been seeing in the ongoing Spider-Man comic.” Weirdsciencedccomics.com notes the issue “lingered a little too long on a few scenes in the middle of the book that didn’t feel overly integral to the story.” Liam Nolan at Adventures in Poor Taste correctly notes the introduction of a new supporting character, Barbara “feels a bit forced.” Mr Nolan then goes on to proclaim the comic as “almost perfect” – an overly enthusiastic assessment, we think.

A huge chunk of the issue relies upon flashbacks. This includes Peter Parker’s fight with a “guy dressed as a giant armadillo” and Miles Morales’ uneventful school life being disturbed by a “flaming piece of a giant robot” that mysteriously fell from the sky. This wreckage is later revealed to have spawned in a very Freudian way from a pink portal. Upon investigation by both Peter Parker and Miles Morales, the portal also spits out the anti-hero Taskmaster, who immediately threatens to kill both Spider-Men.

This flashback is framed by two key scenes. The first has Peter Parker and Miles Morales working together to catch someone who has just boarded a plane (an endeavor that they ultimately failed in). The other is relevant to the overarching plot: the confusing appearance of another, much older, Miles Morales.

Like so many American superhero genre publications, “Spider-Men II” has the problem of being burdened by the publisher’s massively complicated continuity. Any appreciation of the novelty inherent in having parallel reality conflicts and multiple Spider-Men is entirely reliant on above-average foreknowledge of several Marvel publications, making this first issue unfriendly to new readers. “This allows Spider-Men II to be it’s own thing without getting heavy into the confusing continuity of Peter Parker,” says Kevin Lainez at Comicbook Revolution. We disagree. Marvel Comics will not forgo its core readership by making this title easily accessible to new readers.

That pre-supposes that there is any novelty. There is nothing in the comic that has not already been tried in numerous other publications. Parallel realities are a well-worn yarn among Marvel Comics’ titles. The scenes depicting Miles Morales’ life at school are very standard and completely unnecessary at this point. The one saving grace of this series is that it is indeed intriguing that Peter Parker never once thought of determining whether his universe has its own version of Miles Morales. Doug Zawisza’s review at Comicosity repeatedly uses the word “potential”, with apparent churlishness. We agree with the sentiment. Despite our misgivings about the purpose of this miniseries, it is worth at least checking out the next issue if only to see how this mystery unfolds.