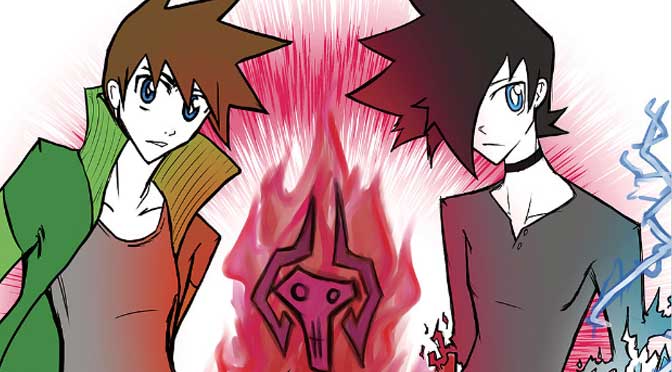 New South Wales is very far from Japan. But Australian creators Bradley Adan and Michael Milhan have immersed themselves in the type of manga genre called akuma shonen, and delivered a story which is clearly a cousin to a title such as “Tokyo Ghoul“.

The protagonist, a young man with the unlikely and off-putting name “Infector”, has the power to see the extent of life and death in a living creature, represented as an battery symbol floating adjacent to the creature’s head. “I can see how much time some of us have left,” Infector notes in an inner monologue, “… and how lucky some of us really are.”

Further, Infector can with one hand cause death, and with the other give life. In doing so, his hands and arms are transformed from the elbow down into skeletal bone encased in eerie fire. Infector is essentially the Angel of Death but embodied as a youth in a leather jacket and sporting a Shibuya haircut.

It is not clear, four issues in, why Infector has this power, and it may be that Infector himself is unaware of the source. Infector’s quasi-mentor, a zany scientist with the descriptive name “Professor Insanus”, serves two main purposes in the story: first, as the narrator of the parameters of Infector’s powers, which include the obligatory warnings to Infector about misuse and consequences.

But second, Insanus is somewhat irritating comic relief. By way of example, a bystander named Violette is discovered to be a science nerd, and she is transformed using a device called into Professor Insanus’ side kick replete with his bushy eyebrows. This is a droll. Still, the anime slapstick of Professor Insanus is a Shakespearean contrast to the otherwise grim and intriguing plot.

Seeking to assist a victim of a mugging, Infector is involved in a fight with a street gang. Infector finds himself outnumbered and in danger. He is saved by the sudden appearance of B.A., his best friend. Awfully, B.A. is beaten to death. Violette is a witness to the murder.

Infector inevitably uses his abilities raises B.A. from the dead. But as an ambulance arrives, Infector panics. He breaks the neck of B.A., killing him again, in order to preserve the secret of his powers.

B.A.’s sister, Eclaire, is a brooding character and early in the story demonstrates that she is a crack shot. Eclaire has done what B.A. would not do: follow their mother into the family business of government-sponsored assassination. When Eclaire learns that B.A. is dead, she is devastated, and is emotionally supported by Infector. “I wish I could have had just one more day with him, you know?” says Eclaire. Infector hugs Eclaire. It is wrong. This is a finely crafted scene.

And then it is revealed to Eclaire by her mother’s agency that Infector is responsible for B.A’s second death. Furious at being betrayed by a friend who is both the murderer of her brother and a false comfort in times of grief, she swears vengeance upon Infector. Bitterness is palpable. The execution of a plot involving such tangled and vivid emotions, the springboard for vendetta is very well done.

Infector (with the help of Professor Insanus) in the meantime exhumes his friend, and yet again raises him from the dead. B.A. initially seems unimpaired by the experience but justifiably angry at Infector for his horrible impulse. And then B.A. begins to exhibit behaviours which suggest something is not quite right.

Eclaire goes to the alley where B.A. was killed, texting Infector an invitation to join her. But Eclaire is confronted by the same street thugs who initially killed Her brother. She savagely beats them. Infector arrives, and is confronted by the pistol-wielding Eclaire. “You were his only friend. How could you betray him like that…” Eclaire says, but it is not a question. It is an expression of disgust.

And, in a genuine shock, Eclaire is suddenly shot in the neck by the street thugs and killed. B.A. arrives: his murderer recognises him and tries to shoot him. But B.A. transforms into something horrible. His face seems to burn as he transforms into a vicious demonic zombie. B.A., or whatever B.A. has become, brutally shreds the thug. Infector retreats from the alley, dragging Eclaire’s body with him.

Infector must then wrestle with the dilemma of reincarnating Eclaire knowing that she might follow in B.A.’s path of diabolic manifestation. And Infector, wracked with guilt, knowing that B.A.’s resurrection has imbued his friend with horror, keeps to himself the knowledge of B.A.’s corruption of the soul.

There is something fascinating at play here. Infector is playing at God. But he is a doubt-ridden, bewildered catalyst of life and death, a young man wanting to do the right thing, blundering into action, and torn by unexpected and hideous consequences. Infector is guided by his intuition and emotionally haunted by his actions. There are shades of Stephen King’s novel “Pet Semetary” (1983) and of Mary Shelley’s “Frankenstein” (1818) in this work. Being wrenched from death, doing the wrong thing for what seems to be the right reasons, is not without a quite foul price. Infector is not some infallible and self-assured celestial agent. He is flawed, stumbles, his well-meaning or frightened behaviour demonically corrupting his friend. Indeed, Infector morally corrupts himself in lying to and betraying Eclaire’s trust. In another story about existence after death, “Inferno” by Dante Alighieri (c.1700), the first circle of hell is reserved for betrayers. The good, fun friend with the stylish haircut and edgy urban wear, Infector, seems appropriately destined for such a fate. He is a complicated protagonist, both likeable but irredeemable by his actions. The writer, Mr Adan, paints this landscape with a subtle hand. To be frank, we were not expecting this level of sophistication in characterisation and plot in a comic with this title.

Which is why the title of this comic book is so baffling. Four issues in, there is no sign of any battle armour. Indeed, there are not even any hints as to where the battle armour might come from – no doubt it will be something flung together by Professor Insanus to deal with the demons Infector has summoned. We put the question of the absence of the battle armour to Mr Adan, who responded by email to the effect that there is a slow build-up to its appearance.

Plans to introduce this element, to fulfil the promise of the title, are a shame. With skill, Mr Adan has crafted a highly respectable akuma shonen tale, a creeping story with emotional nuance, albeit one with an unnecessarily saccharine frosting in the form of Dr Insanus. Why introduce an entirely alien element – battle armour – into a story imbued with weight? With refinement, this story has the potential to be a classic horror title. “What have you done?” a spectral dream screams at Infector in the opening sequence. Why spoil this chilling story? We hope it stays true to its course.