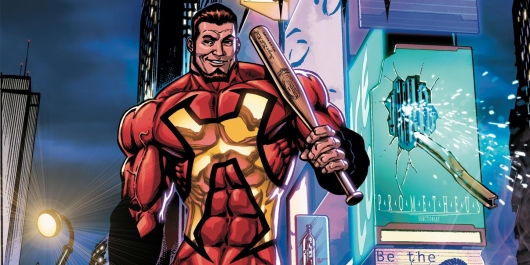 Demi-God is a new comic book series from IDW Publishing, published as part of a new line of comics created in partnership with Ominous Press, with its continuity dubbed the “Ominous Universe”.

Many readers will most likely come across Demi-God #1 because of the prestige of the name credited as writer: Ron Marz is a veteran American comic book writer that has produced a wealth of memorable work for most of the major comic book publishers, most notably for the titles Silver Surfer and, very controversially, Green Lantern.

Unfortunately for readers who are coming in with high expectations due to Ron Marz’ writing, Demi-God #1 will be a massive disappointment. The premise is as simple and as clichéd as one can get within the superhero genre. The lead character, Jason McAndros, is a scrawny self-professed slacker with self-esteem issues imbued with inhuman powers. From there, the comic cobbles together a story using as many worn-out gimmicks it can fit within 20 pages:

Readers who are expecting innovation will not find any in this comic. The disappointment is further exacerbated if the reader is aware that Mr Marz is the same writer who was brave enough (or in some versions of the gossip, compelled by his editor) to transform DC Comics’ popular mainstay superhero Green Lantern from a solid if bland intergalactic policeman into a mass-murdering supervillain. Demi-God, by comparison, is safe, unoriginal, and lacking any element that will make it stand out from all the super hero genre comic books released since the 1990s.

We at the World Comic Book Review have always given first issues of new titles a certain amount of leeway. We are fully aware that some stories need more than 20-odd pages to gain some traction. We are especially forgiving if there is a writer of Mr Marz’ caliber at the helm. But Demi-God #1 is beyond redemption. There is nothing in this comic that can be salvaged.