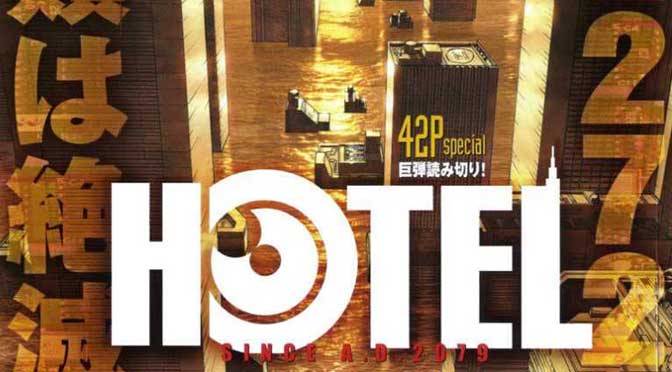 In 2004, South Korean Manhwa artist Mujik Park wrote and illustrated a sci-fi manhwa titled “Hotel: Since 2076” under the nom de plume “Boichi.” The manhwa told the story of an artificially intelligent tower tasked with preserving DNA samples of life on Earth, as the planet had become uninhabitable and all living things ceased to exist.

In 2006, Boichi’s “Hotel: Since 2079” was picked up by Japanese manga publisher Kodansha for its “Weekly Morning” magazine. An updated version was created as the first in a 5-chapter serial anthology under the “Hotel” brand. In addition to the updated “Hotel: Since 2079”, the serial also includes “Present”, “Subete wa Maguro no Tame data” (“It Was All for the Tuna”), “Stephanos”, and “Diadem”. Some of these stories reference events in “Hotel: Since 2079” but are not necessarily beholden to its continuity.

The first chapter in the “Hotel” serialization is essentially the same story depicted in the 2004 manhwa but features updated art, additional scenes, and a minor change in the ending. The story details the last days of life on Earth, as the greenhouse effect has increased the ocean’s temperature and caused it to release methane into the atmosphere. With no other recourse available, the last humans decide to create a space ship – inevitably dubbed the “Ark” – which preserves samples of human DNA, in hopes that other life forms can chance upon it and bring back the human race.

A separate project was started on Earth – a self-repairing and self-maintaining tower that would preserve DNA samples of every known living thing on Earth except for humans, along with the means to create new life from these DNA samples. This is very reminiscent of the Svalbard Global Seed Vault (built in 2006 and opened in 2008 – slightly after the original publication of the manwha).

Rarely has penance been so harsh. The tower’s human creators believe that as it was humans that destroyed the planet in the first place, therefore humans do not deserve to be present when the Earth becomes habitable again. The tower’s maintenance is handled by an AI, which one of its creators named after the musician, Louis Armstrong, due to the tower reminding her of the song “It’s a Wonderful World.”

The rest of the chapter then provides a broad brush overview on the struggles that Louis Armstrong endures for the next 27 million years, stoically weathering destructive environment changes, assault from desperate human survivors, and mechanical failure.

In spite of the bleakly depressing plot absent of any meaningful human characters, “Hotel: Since 2079” is a remarkably thoughtful piece with a very human protagonist in the form of the artificially intelligent machine Louis Armstrong learning to simulate, if not develop, actual human emotions through constant upgrades and repairs. This occurs out of necessity: as the harsh environment erodes the tower, the AI studies its memories of the humans, particularly the scientists that it considers as parents.

The development of sentience proves to be Louis Armstrong’s undoing. It eventually starts being aware of the futility of its task. Like its creators, the AI also starts making mistakes, including one that would ultimately lead to the tower’s failure. Fortunately, by the time the failure happened, the Earth has recovered and the Ark has returned. Louis Armstrong’s final act was to ensure that the DNA samples – including a human one taken from its “parents,” which is a direct violation of the machine’s prime directives done out of human sentiment – are preserved and ready for seeding by the Ark’s crew.

The manga remake and the original manhwa differ in the conclusion. The original manhwa had the Ark’s crew consist of angel-like beings descended from humans. But the manga remake has the Ark instead manned by winged sentient robots, who have failed to save the human DNA samples but can repopulate Earth with the human DNA sample that Louis Armstrong has saved. Both endings are ultimately positive, in the sense that the Earth gets a fresh start beyond apocalypse.

Notwithstanding the straightforward narrative structure, “Hotel: Since 2079” is a layered, engrossing read. The reader cannot help but feel sympathy for the protagonist, which was created and saddled with an insurmountable task, while also developing an understanding of the very human concepts of failure, regret, and loneliness. And it is also a disturbing glimpse of humanity’s possible future, odd though it might be that a manhwa contains lessons on long-term planning on global self-preservation.