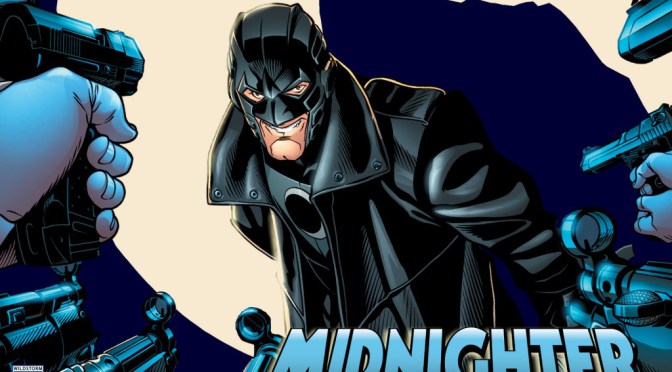 Midnighter # 1 (DC Comics, 2015), written by Steve Orlando and with art by Aco and Hugo Petrus, features a character who is very different from most of its superhero peers.

By way of example, Midnighter’s Grindr profile, set out on the fourth page of the first issue, is most amusing:

Name: M
Currently: Single
Looking for: Dates, friends, sparring
Interests: Violence (inventive)
Chronically new in town.
Computer in brain.
Superhumanly flexible.
Generally uses flexibility for justice.
Looking for other uses.
Have head butted an alien.
Whatever you are thinking the answer is most likely yes.
But with punching.

The American superhero scene is engorged with muscle-bound heterosexual altruists. This has been a state of affairs dating back to the late 1930s. Aside from a influx of militaristic cyborgs in the 1990s, superhero comics have generally featured straight bachelors, wearing clinging acrobat tights adorned with capes, with superpowers.

So the enduring popularity of the Midnighter as an openly gay superhero is a little unusual, especially because the character’s fan base seems to be unequivocally straight.

The character, published by DC Comics, is a leather-clad homosexual protagonist with a decided lack of altruism. The costume is important to the character’s essence, and more on that below.

This latest iteration of Midnighter sensibly brings the character as close to the version published under the Wildstorm imprint of DC in 2000-2003. The character at that time was a member of a team called The Authority. Created by Warren Ellis, Midnighter was the gay partner of a superhero called Apollo. The team of super-powered heroes met unusual but catastrophic global threats such as parallel dimension blue aliens with roots in the Italian Renaissance, an army of cloned supermen from South-East Asia who destroyed Los Angeles, and a pyramidal space god out to turn the Earth into a primordial soup.

As written by Ellis, Midnighter dealt with these with tactical precision and insight, a very aggressive character but fundamentally benign. Software in the character’s head which predicted a foe’s every move and instantly developed a counter-strategy meant that, surrounded by peers with godlike superpowers, Midnighter was a critical player, the tactician, in the group’s dealings with adversaries.

Ellis, having created the concept, left after a year and was replaced in 2000 by another English writer, Mark Millar. Millar famously interposed the title into world events, beginning with an intervention and response to the massacre of a significant percentage of Timor-Leste’s civilian population by Indonesian-backed militia.

But Millar also enacted quite significant tweaks to Midnighter’s character

First, Midnighter was imbued with a penchant for extremely gratuitous violence. Brutal dealings with adversaries involved shuriken, cattle prods, and jackhammers. It was unabashedly vicious, and not necessarily just efficient. There was some glee attached to the violence: the shuriken was embedded in an Indonesian special forces soldier’s groin, the cattle prod was applied to the testicles of a bound prisoner, the jackhammer was used in revenge rape against a vile opponent, who had his spine broken in the combat. It was confrontational and disturbing.

But the evil of the recipients of such brutal violence was so pronounced that a significant section of the readership applauded every successive act of retaliation, the violent proportionality of the response to the evil-doer’s actions entirely different from the altruism of the average superhero.

Second, the character developed a complementary gallows humour imbued with more than a dash of hubris. Millar would write the character with a chilling effect monologue preceding the violence. These pieces of dialogue are very reminiscent of Clint Eastwood’s intimidation of criminals in the film Dirty Harry. It is charismatic and swaggering, a form of verbal confrontation which ensured a loyal readership.

Under Millar’s pen, the character gets some of the best lines. As a TV newsreader says in one issue of The Authority, “My sources tell me that the telegenic Midnighter is interrogating suspects as we speak, which, at least, bodes well for fans of sadism and witty sound-bites.” Here are some examples:

1. “Yes, I’d say it’s extremely likely you can expect this sort of behaviour again in the very near future. The 21st century is a bad time to be a bastard, children.”

2. Midnighter: “But the real question here is whether killing me is going to make you feel more worthwhile, or are you still going back to that damp, little cell you eat, sleep, and take a leak in. Will you still be alone tonight with your sexual power fantasies about the people who boss you around?”
Tank Man: “Shut the hell up!”

Midnighter: “I’ve been there, man. I know what it’s like to be in one of those black ops units where you can’t even remember your own name. I didn’t have a conversation in years. Nobody cares if you live or die. If anything happens to you, they’ll just make another one. Nobody’s interested in what you have to say. You’re just a weapon with a larynx. God, you’re probably somewhere between thirty-five and forty years old and you’ve never even been held, have you?”

3. “You watching Friends? Is it “The one where Phoebe really gets on your nerves?” or “The one where you realise they’re all thirty-five and actually kind of creepy?””

5. Seth: “This supposed to hurt, Cinderella?”
Midnighter: “No, but this should have you howling like a twenty dollar Bangkok lady-boy.”

A 2013 iteration of Midnighter, appearing in a title called Stormwatch (the name of The Authority prior to 2003) was less brutal, less funny, but more efficiently strategic. The costume changed: the trademark long black leather jacket was dropped, a strange exoskeleton linked the skull to the spine, and a phallic metal spike added to the chin of the mask. The character was happy to sacrifice a fellow team member, a pre-teen girl with unpredictable and world-shattering powers, into an otherworldly void (in the earlier iteration, Midnighter was the girl’s foster father).

The reboot was bland, although the character remained a fan favourite: Midnighter featured as a supporting character in a 2014 publication from DC Comics called Grayson, depicted as angry and vengeful rather than witty and macabre.

The return to the original costume in the new 2015 series is a return to the more popular version of the fetishist costume. Heavy metal musicians unwittingly adopted leather fetishism as a collective uniform following Rob Halford, the lead singer of Judas Priest and bondage aficionado, wore leather in a tour in 1978. Leather is frequently associated with SMBD sexual subcultures. Midnighter’s costume is a black skintight leather suit, with draped with a black leather jacket, and a stylised black leather ski mask. Midnighter is a gay leatherman with very sadistic tendencies. Like Halford in leather in the context of heavy metal music, it seems the audience do not really think very hard about the sexual message being communicated by the attire. Or perhaps, given the sharp changes in favour of tolerance of homosexual lifestyles in the Western world over the past decade, the audience does not care.

The character has its origins as a parallel universe version of Batman (Ellis made that plain at the character’s inception). In the pages of Grayson, we see Midnighter suspending a suspect from the top of the world’s tallest building with the threat of death by falling an inducement to supplying information, the scene a clear nod to an almost identical, notorious page in Frank Miller’s highly influential work Dark Knight Returns (1986, DC Comics).

But Orlando’s version of Midnighter carves out its own path. Midnighter, now single, is sexually active. The backstory to the first issue has Midnighter dating a sweet and clearly overwhelmed man he has met on what seems to be Grindr, an app which hooks up people in the gay community. A substantial chunk of the first issue is spent on Midnighter’s downtime, at a bar, at a restaurant, and in bed undressed and kissing his partner. That this is depicted in intimate (but not graphic) detail is further evidence of shifted broader community attitudes. It is a far cry from the fuss that was made about the scene depicting Midnighter and his partner Apollo kissing in the pages of the Authority in 2003.

The ultraviolence has also returned. Midnighter kills opponents in the first issue with a fork, a tablecloth, a sirloin steak bone, and a finger to an eyeball. But the pleasing aspect to this book is the restoration of the banter and wit. Aside from the Grindr profile about, some other examples from issue 1 include:

1. “You’re not great. You’re the human equivalent of irritable bowel syndrome… And by the time you realise this sentence is way too long and my eyes have healed, you’ll know that you’re not surrounding me. I’m arranging you.”

2. Midnighter: “I’d like to continue my slow ritual suicide by cholesterol.”
Bartender: “Oh, but each fried dish is part of my master plan. I’m your true archenemy.”

3. Jason: “Hold on. Is your actual enhancement cynicism?”
Midnighter: “No, I’m just well-endowed.”

And the writing and the art are well-endowed. This is a thoroughly witty, macabre, enjoyable book which handles its title character with adroit skill.