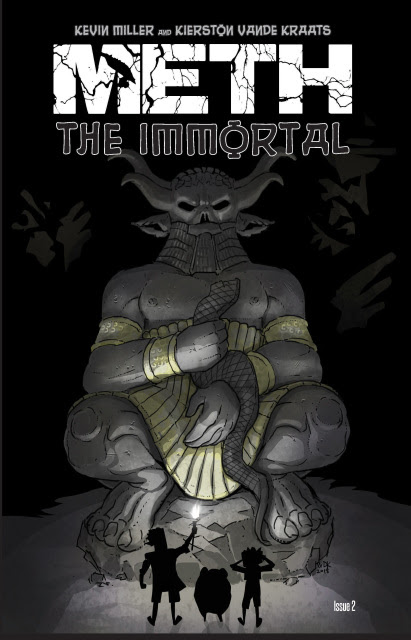 The adventures of our favourite immortal pig continue. Writer Kevin Miller takes us, Meth, and his two human companions, Ali and Mitch, out of Iraq, into Kuwait by way of crashing across the border in a truck, and then smuggled about a ship to Sudan. Accompanying the three on their journey out of the Persian Gulf are various giant stone statues of dark gods from long-extinguished religions.

In the last issue, which we previously reviewed, we were told Meth’s back story – an undying pig with Biblical origins. In this issue, we learn about his Iraqi sidekick, Ali. Quick to learn both money-making and English, the boy assisted American soldiers first in the procurement of supplies and then as a translator. When the Americans left, he fell victim to his father’s abuse, and this in turn ended when ISIS arrived. The boy avoids the stereotype of being a refugee intent on freedom in America: indeed, one of the funniest gags in this issue is that the ultimate destination after traversing every “crap hole in the southern hemisphere” is the United States. “America!” moans Ali. “This keeps getting worse!” It is a sly reminder about the appeal of current US immigration policies.

Other wry jokes include:

a. a Star Wars reference. Upon seeing the shoddy freighter which will transport them out of Kuwait, Ali complains. Mitch replies, “She may not look like much, but she’s got it where it counts, kid.” Perhaps the Mos Eisley spaceport on the fictional desert world of Tattooine is not too far removed from Shukaiwh port in Kuwait;

b. Meth’s farewell to his fellow pigs, a short awkward sentence through which Mr Miller cleverly demonstrates that Meth feels simultaneously obligated to say goodbye, and stupid knowing full well the ignorance of his audience.

There is on the other hand probably a little too much humour around pig poo in this issue, which erodes some of the quality dry wit.

Otherwise, perhaps Meth is not all he seems. Early in the issue, Mitch poked at Meth’s back story: how does the idea of a pig eating the forbidden fruit in the Garden of Eden fit into the theory of evolution? Meth does not have much of an answer. And why was Meth was able to turn a terrifying gaze upon a crew member who discovered both Meth and Ali hidden aboard the freighter? Is it a coincidence that the statue of the Ilu Limnu is stored in Mitch’s sea container? And who is the hidden master of the pelican spy?

There is much still to unpack in Meth: The Immortal, a solid, entertaining read. This comic is available on Kindle by way of this link.

[A correction to this article was added on 5 July 2018: we incorrectly described the publisher as “Milestone Press” and not “Millstone Press”. Sorry.]