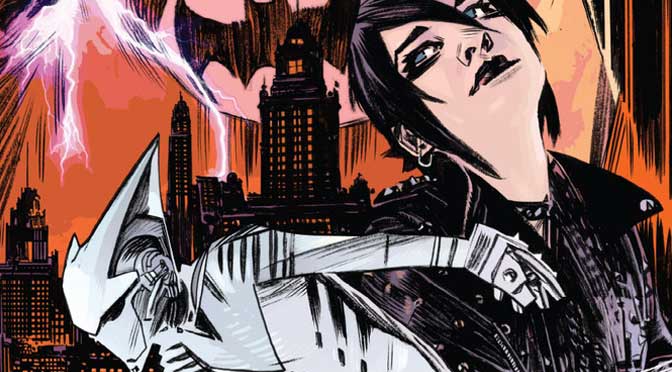 When American publisher DC Comics announced the launch of a new imprint earlier this year, it promised to offer something different. The release of Young Animal, fronted by rocker (the lead singer of the band “My Chemical Romance”) and Umbrella Academy scribe Gerard Way, has so far kept to the weird and eclectic side of DC superheroic stock-in-trade. The uninhibitedly promising Doom Patrol, the bizarre Cave Carson Has a Cybernetic Eye, and the psychedelically charming Shade, The Changing Girl have debuted strongly with their creative direction and likably oddball characters.

It is impossible to look at Young Animal’s spark without thinking of another DC imprint, the prominent and groundbreaking Vertigo Comics. In interviews about his new line, Way frequently mentions the personal impact Vertigo had when it launched in the 1990’s to formally offer more mature takes on life in the DC Universe. Previous iterations of Doom Patrol and Shade found a home at Vertigo, along with The Sandman, Swamp Thing, and Hellblazer. A few decades earlier, The Young Animal books would have fit right in with this roster.

But times change, and that wild, rebellious spirit seems out of place in the Vertigo of today, which has come adrift and suffered several knocks in this new decade. The first came when 2011’s New 52 continuity reboot mandated a return of all DC-continuity characters, turning the Vertigo line-up into purely creator-owned books.

Then, Vertigo’s highly respected founder and longtime editor Karen Berger departed from the line in 2013 and her replacement, Shelly Bond, was controversially removed as Vertigo was vaguely “restructured” earlier this year. The removal of Ms Bond, who Way describes as his partner in the creation of Young Animal, shows Vertigo to be a very different creature from its ‘90’s heyday.

Despite the critical successes of its creator-owned material like The Sheriff of Babylon and Clean Room, the current line-up, including a TV cash-in for Lucifer and a sequel to the film The Lost Boys, suggests an imprint that has lost something from its soul.

With the release of Mother Panic #1, Young Animal’s completed first wave attempts to reincarnate this off-beat spirit. In a line-up that has so far consisted of recycled, revamped and reintroduced characters from the distant recesses of DC Comics’ musty archives, Mother Panic is the only wholly new property to come out of Young Animal.

Given this, it might seem strange that the premise is so familiar: a damaged, wealthy vigilante stalks criminals in Gotham City. Despite how tried and tired this sounds against the endless wash of DC Comics’ evergreen angst-driven superhero Batman and the spin-off “Bat-Family” titles currently released, Mother Panic has some much-needed twists.

The primary difference comes from protagonist Violet Paige, a very different kind of beast. As a tabloid fixture with a trigger-happy middle finger, Violet expresses a kind of Courtney Love contempt for her celebutante status as she returns to Gotham City after a decade away. As a vigilante, Violet further distinguishes from her Bat-counterpart through a disinterest in social justice. Rather than make Gotham a better place, Violet is engaged in a mission of revenge for her father’s murder, seemingly willing to overlook crimes for this purpose.

The most interesting part of this backstory comes in the form of Violet’s still-living mother, a longtime sufferer of early-onset Alzheimer’s Disease. While Way has mentioned that parent-child relationships are a unifying theme across the Young Animal books, Mother Panic most clearly displays this influence. Rebecca Paige steals the few scenes she has, and her dynamic with Violet is one of the most interesting and promising aspects of the issue.

In needing to cover this new character and backstory, the premiere issue is refreshingly scant on explanation. Writer Jody Houser (whose “Adrift” was so very good) is at her strongest when the issue keeps things understated. A couple of well-placed flashback scenes, for example, are thoughtfully minimal and avoid feeling expository. The issue’s obligatory fight scene is bizarrely interrupted with panels depicting a lightening-struck tree and a skull-nestled rabbit. These inclusions do wonders to hint at the stormy landscape of Violet’s mind and suggest that, like her mother, some degenerative illness is at play. These moments are complimented by the always-great Tommy Lee Edwards, an artist who perfectly complements the comic’s volatility. His leering Gotham City lends each panel a coat of grit that is sorely missing in the mainline Batman titles.

The writing that succeeds in these quite moments is unfortunately less effective when it comes to the forefront. Violet’s narration never quite finds its footing and results in some woefully misfired lines. Her early declaration “to light a match” and burn Gotham City to the ground and her insult toward high-society as a bunch of “Really damn BORING assholes” feel jarringly like lines meant to tell readers about her character rather than provide genuine windows into her soul. As a result of the narration, Violet ends up feeling both one-note and a little lifeless. The villains are similarly a little stiff and the appearance of their dialogue-heavy, murder-as-art schtick elicits from readers a kind of “Yeah, I get it” impatience.

The additional appearance of Batman, who spends a panel quietly surveying the goons put down by Mother Panic, feels intrusive. While there’s a certain perverse joy in seeing the Dark Knight cameo on a page where our protagonist replies “Fuck the Bat”, it suggests the likelihood of an inevitable, sales-driving confrontation. With the potential Mother Panic offers, such a conflict feels both early and unwelcome.

Though it hits a few false notes, Mother Panic is an overall solid issue and a debut with great promise. Though Violet comes across a little flat when compared to Young Animal’s other strong introductions, future issues will hopefully be less forceful in their attempts to characterize and more willing to trust the understated moments that make the issue succeed.

With Mother Panic, Young Animal solidifies itself as a new DC cornerstone and one of the most exciting things to come out of the publisher in a long time. As Violet carves herself a unique place in Gotham City, this new imprint solidifies its launch as a worthwhile inheritor of Vertigo’s quenched incandescent youth. Young Animal promises to keep things both weird and interesting. We believe the promise.